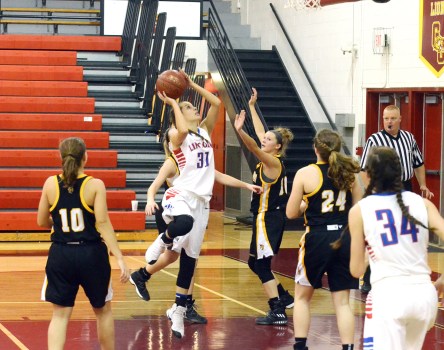 JENNA KING of Lincoln County drives the lane for two of her game-high 28 points in the Lady Patriots' 76-43 win in the Lady Lions Classic at Garrard County Wednesday. King was one of three Lady Pats hitting double figures in the game, with Maddy Boyle adding 14 points and Emma King getting 11 points. 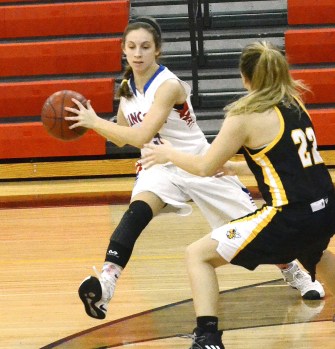 LINCOLN RESERVE Anna Lane is guarded by Woodford's Abbey Peterson as she works the ball around the perimeter in second-half action Wednesday.

LANCASTER — Another game. Another big win.
The Lincoln County girls basketball team improved to 8-3 on the season with another blowout victory. Seven of Lincoln’s eight wins this season have been by margins of 23+ points and the latest blowout victory was notched Wednesday in the semifinal round of the Lady Lions Classic at Garrard County as the Lady Patriots rolled past Woodford County 76-43.
It was another slow start for Lincoln, with Woodford challenging 19-17 in the first quarter before the Lady Patriots pulled away.
“I tell the girls all the time, ‘A game’s like a marathon. It’s not a sprint. It’s not the first one to come out of the gate who always wins. It’s do the same things that we do over the course of the game and finish strong.’ And we did that today,” Lincoln coach Cassandra McWhorter said. “When we play that way we will outlast people and get those big wins.”
Despite the slow start, there was no way McWhorter could lament 19 first-quarter points.
“A little bit of a slow start, but I’ll take 19 points in the first quarter every game,” she said. “We just didn’t defensively stop them. They had three 3’s in the first quarter, but that was a lot about recognition against a team they hadn’t seen before, trying to figure out who the shooters were.”
Senior Jenna King swished the nets for a career-high 28 points to lead Lincoln to victory and was one of three Lady Patriots hitting double figures. Maddy Boyle scored 14 points and Emma King finished with 11 points. Zaria Napier was oh-so-close to double figures, coming off the bench to score nine points.
Jenna King wasted little time in putting up points, scoring four of the Lady Patriots’ first six points, but it was over the second and third quarters where she came through with some big points to help Lincoln shake off the slow start and roll through each of the final three quarters. King scored 19 of her 28 points over a span of 12 minutes, 32 seconds as the Lady Patriots blew the game wide open with a 31-10 scoring blitz, including a 14-0 run to start the third quarter.
“Jenna had a huge game,” McWhorter said. “They were playing zone. She found that short corner spot and she loves that short corner shot. She attacked the rim well. Then she stepped out and knocked down a 3 in the third quarter. She had a big night.”
A 7-0 run to start the second quarter helped kickstart Lincoln’s blowout run. Emma King hit inside to start the second-quarter run, Boyle drove inside for two layups and Napier sank a free throw as the Lady Pats upped their lead to 26-17.
Boyle scored both her layups in the run off steals – her own takeaways.
“Maddy stepped up defensively today,” said McWhorter. “When Maddy plays how she is capable defensively, it gets us going offensively. It gets her going offensively. And it spreads everything out for everybody else when that happens.”
Woodford forward Delaney Enlow, one of three Lady Yellow Jackets scoring 12 points, put an end to the Lincoln run with 5:52 left in the first half, hitting in the paint. The Lady Yellow Jackets, who were just 29 percent from the field on 15-for-52 shooting, took only one shot before connecting for their first second-quarter shot but turned the ball over six times. They were 4-for-10 in the second with Enlow scoring two buckets and Peyton Rose, who also had 12 points, and Abbey Peterson each knocking down a 3-pointer.
Lincoln, which finished at 46 percent on 32-for-69 shooting, had its best offensive effort in the second, going 12-for-19 with three 3’s as the Lady Patriots outscored the Lady Yellow Jackets 28-10. Logan Godbey, Jenna King and Boyle each had a 3-pointer in the second period. Jenna King and Boyle had nine points apiece in the 28-10 run, Emma King had four points and Godbey and Napier each had three as Lincoln posted a 47-27 halftime lead.
The Lady Patriots blew the game wide open at the start of the third quarter by knocking down 14 unanswered points. Godbey scored the first goal in the run, Jenna King followed with two buckets in the paint and three free throws, Kaitlynn Wilks added a free throw toss, and Boyle went coast-to-coast on a steal before Jenna King scored another bucket to make it 61-27 with 3:28 left in the third.
Woodford (7-4) never threatened Lincoln’s lead, scoring just seven points in the third quarter and nine points in the fourth.
Abby Moffett finished with 12 points for Woodford.