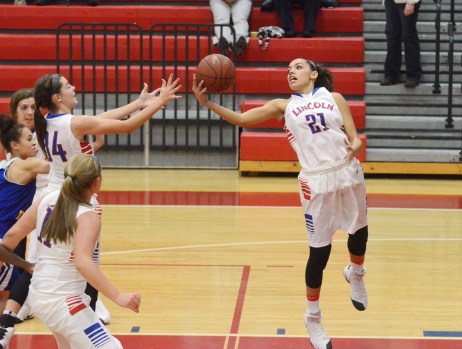 STANFORD — Four Lady Patriots had double figures Friday night as Lincoln County had its way with visiting Madison Central.
The Lady Patriots built a 34-17 halftime lead against the Lady Indians and never looked back in claiming an 81-47 win.
Emma King led Lincoln (5-1) with 23 points, seven rebounds, six assists and four steals, Kaitlynn Wilks followed with 14 points, six boards and four steals, Jenna King added 13 points and six rebounds and Haley Southerland kicked in with 10 points and six boards.
The Lady Indians, who have now dropped four straight games, took the early lead with Kasi Schneid driving in for a layup. But the Lady Patriots exploded on a 14-1 run after the layup to take control of the game. Emma and Jenna King scored six points apiece in the run and Wilks added a bucket.
The Lincoln lead was 19-9 at the end of the first quarter.
Central trimmed Lincoln’s lead to single digits, 21-13, in the second quarter only to have the Lady Patriots close the half on a 13-4 run. Southerland and Emma King tallied four points apiece in the run, Anna Lane nailed a 3-pointer and Jenna King got a layup to make it 34-17.
The two teams played almost even in the third quarter, with Lincoln edging Central in scoring 21-20, but the Lady Patriots put the game away in the final frame, outpointing the Lady Indians 26-10.
Madison Central’s Lindsey Johns had a game-high 24 points and 13 rebounds. Mallie Cornett followed with 10 points, eight rebounds, four blocks, three steals and an assist.
Lincoln shot 46 percent from the field, going 32-for-70, 8-for-24 from 3-point range. The Lady Pats were 9-for-11 at the foul line.
Central was at 31 percent from the field, going 16-for-51, 3-for-13 from 3, and was 12-for-17 at the line.
The Lady Patriots outrebounded the Lady Indians 42-35.