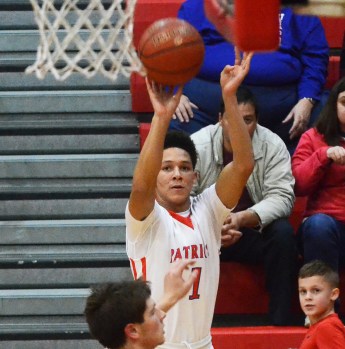 DEVIN ALCORN of Lincoln County has his eyes on the basket as he fires up this 3-point shot attempt in the second half Tuesday in the Patriots' 80-60 win over West Jessamine. Alcorn scored 17 points in the win. Photo by Nancy Leedy 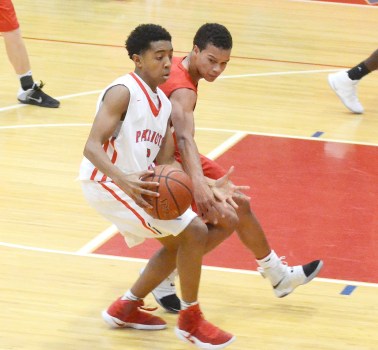 LINCOLN reserve Damien Givens-Ford maintains control of the basketball despite the efforts of a West Jessamine defender. Photo by Nancy Leedy 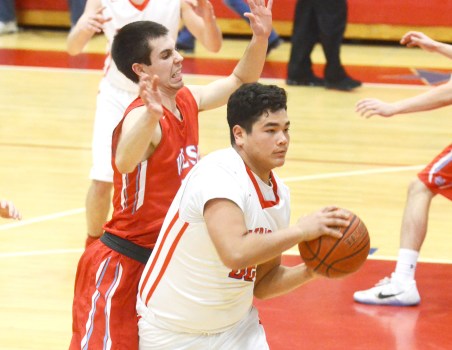 LINCOLN'S Carlos Nunez keeps West Jessamine's Bradley Tullar at his back as he works the ball inside during boys' basketball action at LCHS Tuesday. Nunez had six points in the Lincoln win. Photo by Nancy Leedy 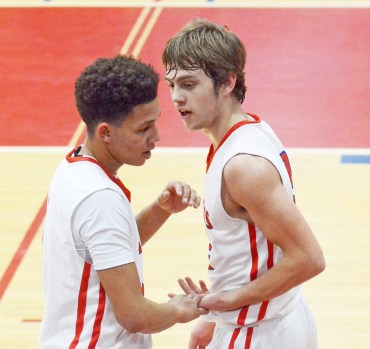 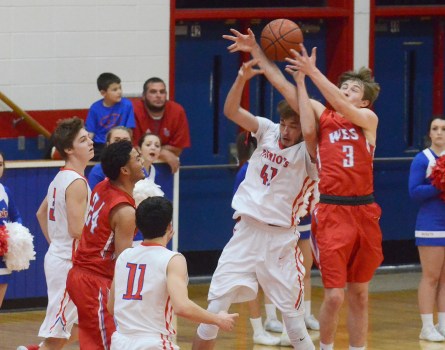 WEST JESSSAMINE'S Dalton Bruner gets up above Lincoln's Nick Noland to grab this first-half rebound Tuesday at LCHS. Photo by Nancy Leedy 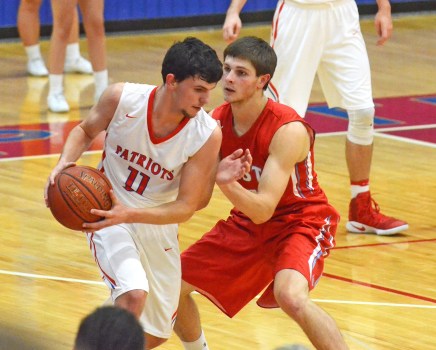 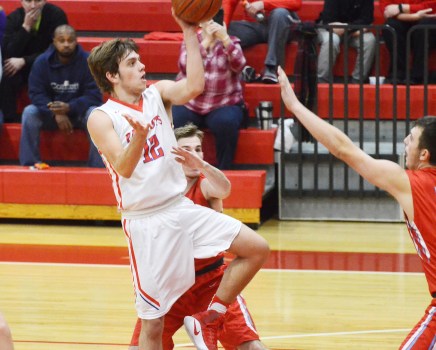 NOAH YOUNG of Lincoln County drives the lane for two of his game-high 31 points in the Patriots' 80-60 win over West Jessamine Tuesday. He was 11-for-16 from the field, 7-for-7 from 3. He also had four assists. Photo by Nancy Leedy

STANFORD — The Lincoln County boys developed a habit Tuesday night – a habit of putting the ball in the basket.
The Patriots shot a blistering 67 percent from the field overall, 71 percent from 3-point range, in their matchup with 12th Region foe West Jessamine, connecting on 30 of 45 field goals and 12 of 17 3’s as they corralled the Colts 80-60.
After a closely-contested first quarter, Lincoln (4-2) used a 23-6 second-quarter run to open up a 42-22 halftime lead, then led by as many as 37 points in the third quarter to enforce the running clock before moving on for the win.
“The basket was big tonight,” Lincoln coach Jeff Jackson said with a laugh. “I wish we could do that all the time. If we can shoot that well all the time it would be great. But the big thing was that our defense was just really good tonight.”
West Jessamine (3-2) averaged 53.3 percent from the field coming into the game, with four players averaging double figures, but Lincoln held the Colts to a 42 percent effort (22-for-52) Tuesday and the only West player in double figures, John Davis with 13 points, was not one of the four. The team’s leading scorer, Isaiah Okesson, had averaged 17.8 points, but was held to nine points. Dalton Bruner (15.3 average) and Kendall Peters (12.3) got just six points each and Bradley Tullar (11) got four.
“I’m proud of our kids. They played well defensively tonight against a very, very good team,” said Jackson.
Shouts of “Whoo-hoo!” could be heard from the bleachers at times as Lincoln lit up the scoreboards with its hot-hand. A “Whoo-hoo!” didn’t slip past Jackson’s lips following the win, but he did give a sigh of relief.
“No, I never thought the game would end like this,” he said. “They are such a good, good team. We thought it would be a real battle, a fight all the way.”
All 15 Lincoln players saw action, with 10 getting in the scorebook, led by Noah Young who had his second straight 30+ game. The senior guard scored a game-high 31 points, on 11-for-16 shooting, 7-for-7 from 3. Devin Alcorn also hit double figures for Lincoln, pushing in 17 points on 6-for-9 shooting. Both Young and Alcorn had four assists.
Young put up 22 first-half points to help Lincoln pull away from West, connecting for three 3-pointers, three field goals and two free throws in the Patriots’ 23-6 second-quarter run to extend a 19-16 lead into a 42-22 halftime cushion. Nick Noland and Blake Smith also had 3’s in the run.
And Lincoln never looked back.
“We got off to a good start shooting the ball, and Noah has just been unconscious,” Jackson said. “He’s done a really good job running the team. Even though he’s scoring, he’s still getting people involved and getting the ball to people that are open. Our kids are sharing the ball.”
Lincoln’s offense didn’t lose any steam in the break, coming out and converting on its first five shot attempts, four from 3-point range, to explode out to a 56-25 lead. Alcorn, who scored 12 second-half points, nailed the first trey, Young pushed down three 3’s and Carlos Nunez hit inside.
The Patriots posted their biggest lead of the night late in the third, 72-35, after back-to-back buckets from Sawyer Carrier and Alcorn.
Davis scored 11 of his team-high 13 points in the fourth quarter to help West cut into Lincoln’s lead before the final buzzer.
“Our kids played well tonight, especially coming off the Madison Southern loss,” Jackson said. “We played terrible Saturday. We had no emotion, no intensity and Madison Southern took it to us. But we had a good practice yesterday and they responded tonight. I thought our defense was good. We were active. We moved the ball well, did a decent job rebounding. We played really well and we just hope it’s something we can build on.”
Jackson changed his starting lineup slightly Tuesday and he said he liked the outcome.
“We made a change with Carlos (Nunez) and Nick (Noland) and I thought Carlos played well starting and I thought Nick came off the bench and was a little more relaxed and played well,” he said. “I’m happy for Nick. He just seemed a little bit more at ease. I thought both played well.”
Noland finished with nine points and Nunez had six.
West outrebounded Lincoln 31-19. 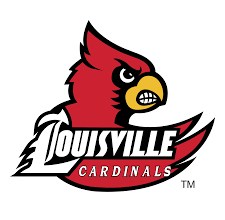