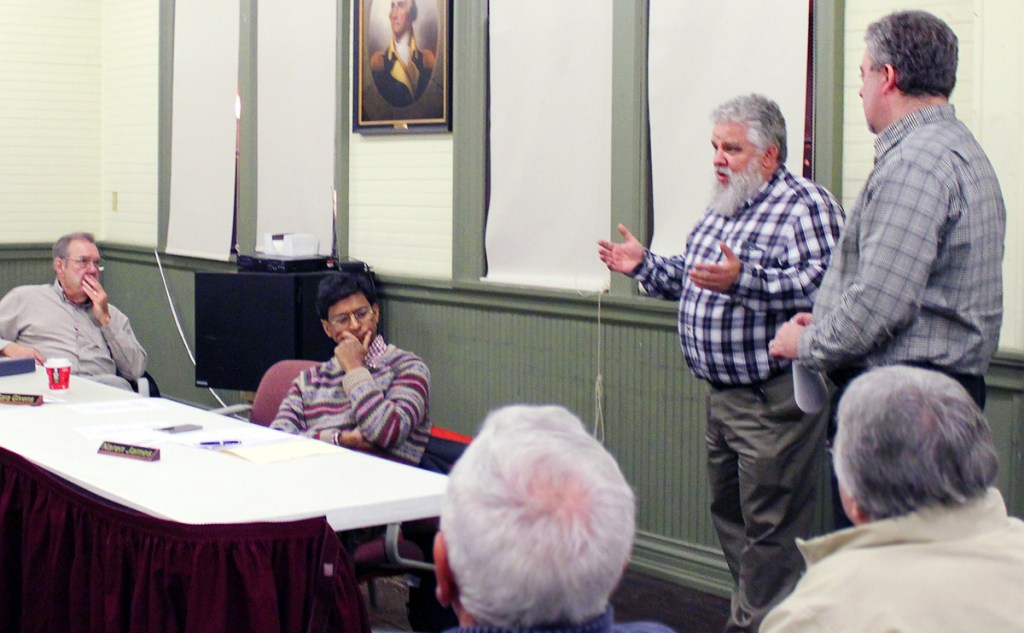 STANFORD – The City of Stanford gave the go-ahead to apply for a $10,000 grant that could help the city update its comprehensive plan – something the mayor said should have been updated four years ago, by law.
It’s been about nine years since the comprehensive plan was last updated and two representatives from the Bluegrass Area Development District (ADD), Shane New and Josh Cook, spoke to city council members about the updating process during the regular meeting last Thursday.
“By law it’s supposed to be updated every five years and it’s been about nine years. It’s really outdated,” said Stanford Mayor Eddie Carter. “I talked to (Bluegrass ADD) and they found some grant money to help update it, a $10,000 grant. It’s a pretty detailed layout of the city and our goals, longterm.”
Carter said the plan would be updated to include information like the recent annexation of property on Westwood Drive, a six-million-dollar sewer project and other changes that occurred in the last decade.
New explained while there is no one really policing cities on their comprehensive plans, updating the plan would help the city avoid future liability or uncertainty if it ever comes into question.
Normally updating the plan would be bid out as an 18-month job, New said, but since it is a six-month grant, it will be more of a “crash course” update.
The grant application through the Brushy Fork Institute is due Jan 6 and the city should know in February whether it received the funding.
Carter said the grant will not cover the entire expense but it is an 80 to 20 match, with the city paying 20 percent.
“It’s about a $25,000 deal most of the time, but they’re (Bluegrass ADD) going to give us a break and try to work with us,” he said. “I’m going to try to get some money donated from our industrial board.”
New said Bluegrass ADD has a pool of funding that they will use to match the grant.
The process will require assistance from the planning and zoning commission, he explained, as well as cooperation from other entities in gathering information.
Ward Hart, chairman of the planning and zoning commission was present at the Stanford council meeting Dec. 1 and said he was familiar with the process.
With updating city ordinances being one of the council’s recent goals as well, Carter said Cook was willing to review them and propose changes.
“The second proposal was to take some time to read through your codes, analyze them and then create a report to give to you that would outline the changes that we would recommend to your zoning ordinance and subdivision regulations,” Cook told the council.
The intitial contract to review codes and ordinances is not to exceed $1,500 and once the report is generated, a quote for the cost of actually updating the ordinances will be provided.
New said Bluegrass ADD might be able to review the ordinances for less than the $1,500 amount and the city will only be billed for however much it costs.
Councilwoman Peggy Hester asked if ordinances are updated according to state law, which Cook affirmed.
The city council voted unanimously to allow Bluegrass ADD to apply for the grant on the city’s behalf and approved the contract with Bluegrass ADD to review and offer recommendations on city ordinances.

A strategic plan
In addition to updating the comprehensive plan, councilman Ronnie Deatherage suggested the city council put together a strategic plan as well.
Deatherage said the city didn’t have a vision and mission statement, so he wrote one.
“Every organization should have one,” he said. “I’ve never seen one. It oughta be on the wall somewhere so everyone can see. If somebody asked me what’s the initiative of the Stanford City Council, I want to be able to say what are our initiatives for this year.”
Deatherage provided council members with a set of goals and strategic plan that he drafted.
The first goal is to “preserve the small town feel of Stanford” which he states is a major part of Stanford’s identity. Strategies listed under the goal include creating a more vibrant business community by encouraging and strengthening the arts community and promoting shopping local; promoting city events; and strengthening relationships with other local government.
“The Arts Center is gone, we’ve talked about doing something out at the Ice House but we haven’t done anything about it,” Deatherage said. “None of this stuff cost any money hardly. We don’t have a Facebook page, easy to do.”
The mission drafted by Deatherage states Stanford aims to “inspire, educate, involve and communicate” and lists a series of pledges by the city council to “communicate openly and effectively, be responsible and be fiscally responsible.”
Carter suggested the council review the city’s older strategic plan as well as Deatherage’s and put together an updated version.
Other goals listed in the strategic plan relate to urban design, improving walking and biking infrastructures, promoting healthy iniatitives and more.
The vision involves creating a spirit of community where people are treated with respect and feel safe, where business growth is supported and where quality public services, parks, police and fire departments are available.
In other business, the council:
• Appointed Dan Bertram to the Stanford Water Commission. The council reviewed three applications from the current commissioner Ella Mae Curlis, Jerry Gooch and Dan Bertram. Bertram will replace Curlis Jan 1 and will serve for six years. Councilman Scottie Ernst voted against the motion.
• Approved the first readings of ordinance updates in the historic district, residential zones and neighborhood business zones banning LED signs. Carter said that does not mean variances cannot be sought through the board of adjustments.