Patriots shoot down Rockets 64-56 in OT 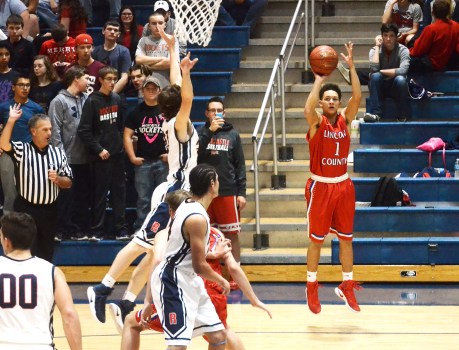 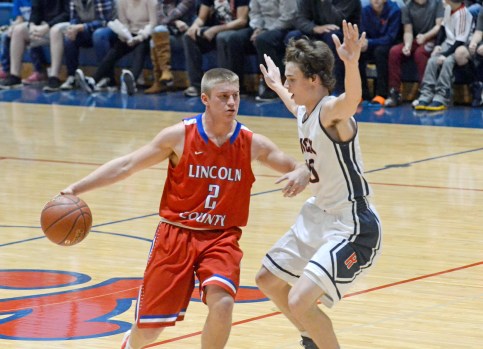 LINCOLN’S Tanner McAninch dribbles his way around the perimeter, using his arm to keep a Rockcastle County defender at bay. McAninch finished with six points and grabbed nine rebounds in the Patriots’ 64-56 overtime road win. Photo by Nancy Leedy 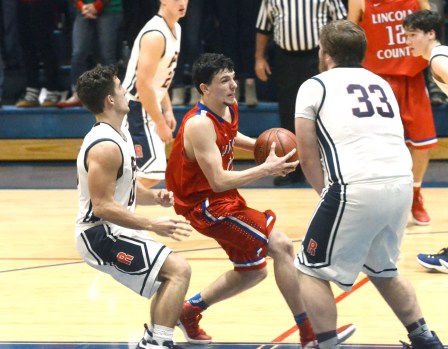 MT. VERNON — In Lincoln County’s season-opening overtime game with Lafayette, the Patriots did not fare so well in the extra frame as the Generals claimed the win.
Lincoln would meet with much better results in a second straight overtime game Friday night, with the Patriots controlling the overtime period to earn their first win, a 64-56 victory over host Rockcastle County.
“We finished it out this time,” Lincoln coach Jeff Jackson said. “In overtime I thought we showed some toughness and some maturity. The other night against Lafayette when we went into overtime, we seemed a little shell-shocked. Tonight, I thought we went out in the overtime and was pretty positive in the huddle and focused. I think we might have grown up a little bit from the other night to tonight.”
After posting a 17-16 first-quarter lead, Lincoln (1-1) hit the deep freeze shooting, going 1-for-8 from the field over a five-minute stretch as Rockcastle rocketed ahead to post a 27-20 lead. Cameron Cornelius tallied 10 of his 13 total points during the Patriot slump to help the Rockets (1-1) to the early lead.
But Noah Young, who had a team-high 21 points to lead Lincoln, would roll off seven unanswered points to ignite a 22-6 Patriot run. Young’s 9-0 run, which included a 3-pointer, tied the game at 27-all. Rockcastle’s Carson Noble, who had a game-high 24 points and 12 rebounds for the Rockets, would close the first half with his own run, scoring in the paint and sinking three free throws to give Rockcastle a 32-27 lead at the break.
Rockcastle, which finished 18-for-53 from the field (34 percent), experienced its own scoring drought in the third quarter, going just 0-for-9 with five turnovers for the first seven minutes of the second half. Meanwhile, Lincoln continued on its 22-6 run. Young pumped in six more points in the run, Nick Noland got a three-point play and a bucket and Chase Phillips, who double-doubled with 13 points and 10 rebounds, drove inside for a layup and a 42-33 Patriot lead.
“We went several minutes without scoring hardly, and that wasn’t good,” Jackson said. “We’ve got to do a better job of executing our offense, especially when we’ve got the lead. We’re not doing a good job of getting people spread out and I’ll take full responsibility for that.”
Lincoln led 44-37 at the end of the third and was up by as many as 10 before Rockcastle made a final run to force overtime. Noble knocked down seven points late in the fourth then Thomas Burdette nailed a 3 with just eight ticks left to deadlock the game at 54-54.
The Patriots never trailed in the overtime, taking control with a 7-0 opening run. Alcorn, who finished with 15 points, hit inside then Tanner McAninch and Phillips both went 2-for-2 at the line and Young went 1-for-2 to put Lincoln on top to stay, 61-54.
The Pats, who struggled at the line late against Lafayette, were 8-for-10 in the overtime period.
“We had some opportunities to finish it in regulation,” Jackson said. “They hit some 3s and banked a free-throw jumper in. You have to give them credit for fighting and getting back in it. But I’ve got to give our kids credit for fighting hard in the overtime and making plays and making our free throws in the overtime period. Chase and Tanner hit some big ones and Noah and Devin hit some.”
Lincoln shot 48 percent from the field, going 21-for-44. The Patriots were 17-for-23 at the foul line. Rockcastle was at 34 percent overall from the field (18-for-53) and 15-for-20 at the line.
Rockcastle edged Lincoln 33-32 on the glass. McAninch grabbed nine rebounds for Lincoln and Young and Noland each had five. The Rockets had 13 turnovers to the Pats’ 14.
“Tonight’s win was a good win for our kids, a much-needed win after the other night,” said Jackson. “I’m real proud of our kids. I thought everybody gave a good contribution. Nick (Noland) played well then Carlos (Nunez) came in, Cam (Britton), Blake (Smith) and Sawyer (Carrier) came in and played really well for us. I was real pleased with Sawyer. Sometimes you’ve got to throw kids out there because of foul trouble and some situations.  We try to tell them to always be ready, you never know when your name’s going to get called.”