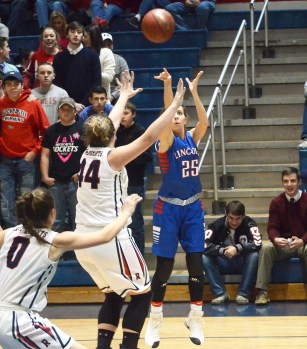 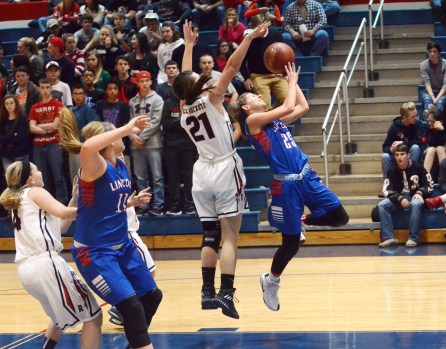 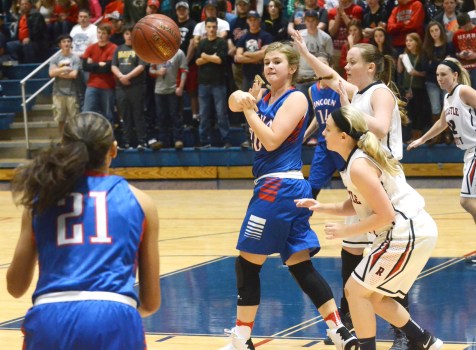 MT. VERNON — At halftime of the opening tilt of the girl/boy basketball doubleheader at Mt. Vernon Friday night, the Lincoln County and Rockcastle County girls appeared destined for a nail-biting, white-knuckle type of finish. Here was Lincoln’s sophomore-dominated team deadlocked at 29-all against senior-dominated Rockcastle.
And then, in the span of 9 minutes, 43 seconds, the Lady Patriots gave the Lady Rockets a swift kick in the pants, exploding on a 37-11 scoring surge to blow the game wide open.
The result: Lincoln moved on to rip Rockcastle 77-49.
Lincoln coach Cassandra McWhorter attributed the Lady Patriots’ blowout second half to “fresh legs.”
“We got in foul trouble there with almost the whole team the first half.  So, when we come out the second half, everybody’s fresh, kind of excited, pumped up to go,” she said. “And it showed having our starters back in and your first seven or eight people in the game. And we were hitting much better the second half. It makes a huge difference when you put the ball in the hole.”
Lincoln, which shot 30 percent (11-for-37) from the field the first half, shot 44 percent for the game on 29-for-66 shooting. The Lady Patriots were 17-for-25 at the foul line.
Kaitlynn Wilks, who had a game-high 26 points and 12 rebounds, poured in 14 of her points in the second-half scoring spurt to lead Lincoln (2-0) to the lopsided win. Three Lady Patriots would hit double figures in the road win and two more came oh-so-close. Emma King followed Wilks with 17 points and Haley Southerland finished with 10 points. Maddy Boyle and Logan Godbey just missed double figures with nine points apiece.
Rockcastle (1-1) broke the halftime tie when Maddy Bullen opened the third quarter with a bucket then Emme Barker followed with a free throw to edge the Rockets on top 32-29 before Lincoln (2-0) broke on its 37-11 run.
Boyle tallied all of her nine points in the run, Godbey scored six points, King had five points and Southerland nailed a 3-pointer to turn the 32-29 deficit into a 66-40 lead and set the Lady Patriots on course for the easy win.
“I thought the girls did a good job of coming out and responding and putting our foot down and not letting up,” McWhorter said.
The Lincoln mentor said she was extremely pleased with the night’s results considering the Lady Patriots’ history at RCHS.
“We typically don’t play well here,” she said. “I don’t know why, but we don’t necessarily play well here. They are a good team. They are always going to be well-coached with coach (Chrysti) Noble over there on the sideline. She’s going to get her girls to play as well as they can every possession.”
Lincoln had to surge early to take its first lead. The Lady Rockets opened up a 5-2 lead only to have the Lady Patriots answer with a 13-2 run. Jenna King scored six points in the run, Wilks had three and Southerland put up four points, including a bucket off a steal to cap the run and make it 15-7, Lincoln, with 1:23 left in the first.
The Lady Pats were up 15-11 at the end of the first and led by as many as eight, 23-15, in the second quarter before the Lady Rockets took flight to tie the game at the half. Mahala Saylor, who had 11 points for Rockcastle, opened a 14-6 Lady Rocket run with a 3-pointer. Hope Kelley, who led the team with 14 points, scored nine of the 14 points in the run, including a 3-pointer, as the Lady Rockets evened the game at 29.
“They shot the ball extremely well the first half, shooting 50 percent from 3 and, I think, 40 or more percent from the field goal. And we were missing some shots,” said McWhorter. “It helped there the second half where they went cold from outside and we were able to get things going. That made a huge difference in the game when we finally started hitting.”
Rockcastle, which was 9-for-25 from the field the first half, was just 14-for-45 for the game for 31 percent. The Lady Rockets were 18-for-26 at the foul line.
Lincoln outrebounded Rockcastle 41-27.