Board of adjustments grants variances for three signs 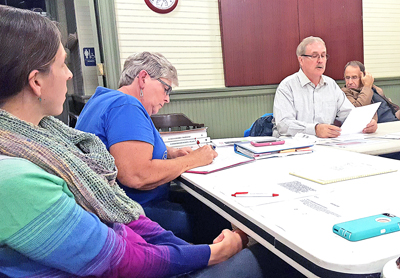 Photo by Abigail Whitehouse Members of the board of adjustments review applications for variances on local illuminated signs.

STANFORD – After about a month of discussion on the digital, LED signs outside of two local businesses, the board of adjustments has granted variances that allow the signs to be on during certain times.
There were three businesses who submitted applications for variances on signs from the board of adjustments: Hilltop Florist, owned by Merle Miracle; Ruff to Pawfect Pet Salon, owned by Dillon Roberts; and Andrew Automotive, owned by Tony Andrew.
The first hearing on Nov. 17 addressed Miracle’s application to continue using his LED sign which was installed outside of his business on Lancaster Street about two-and-a-half years ago.
“When I put it up, I thought I had permission, everything was okay and I didn’t know anything for two-and-a-half years,” Miracle said. “I wouldn’t have put it up if I had known this.”
Board Chairman Ward Hart reviewed the ordinance for illuminated signs.
“The reason it is non-compliant is because we do have, in our sign ordinance it says, ‘any illuminated sign or lighting device shall employ only light emitting a constant intensity and no sign shall be illuminated by or contain flashing, intermittent, rotating or moving light or lights,’” he said.
Aside from that, Hart said the sign was compliant in all other aspects.
“As far as the size of it, we’ve got no problem with that. We’ve got no problem with the community billboard advertising that he puts on there, I think that’s a good thing,” Hart said. “So really it’s just strictly the fact that it does have flashing, moving and rotating light on the sign.”
While letters were sent to all adjoining properties and the hearing was advertised in The Interior Journal for two weeks, there were no property owners present and no one in attendance voiced concern with Miracle’s sign.
Stanford City Attorney Chris Reed told the board that issues with the signs were addressed through recent nuisance hearings and those who filed the complaints were satisfied with the agreement to turn the signs off from 9 p.m. to 7 a.m. each night. Reed asked the board to consider those conditions.
While Roberts signed a written agreement following the nuisance hearings, Miracle did not.
“I haven’t agreed to anything and I’m not going to at this point,” Miracle said. “I’m not saying I won’t but right now I’m not going to. If I had known this we wouldn’t be here today, I wouldn’t have a sign and I wouldn’t have wasted my money. It is going off right now. I told them I would comply, I didn’t sign a paper saying I’d agree to it,” Miracle said.
Board member Judy Hester asked Miracle if he had the capability to dim the sign or turn it off.
Miracle said he installed a dimmer about two months ago but he isn’t sure to what degree it’s dimming the light.
“What we have to consider, in your case, is the business is located in a business-residential area,” Hart said. “That’s what you’re looking at because of the proximity to residential.”
Hart asked Miracle if the board were to grant the variance, whether he would comply with the conditions to turn the sign off from 9 p.m. to 7 a.m.
“I’ll do it because I told them I would but I’m not officially agreeing to anything,” Miracle said.
“The only problem I see is that at any time you could leave the sign on all night,” Hart said.
“My word means more than that to me,” Miracle said. “Until it goes to the next step, I’m going to abide by what you say.”
Hart said the condition on the variance won’t change anything because Miracle is voluntarily complying with those conditions.
Under the same conditions, a unanimous vote by the board approved the variance for Miracle’s sign.
A second hearing was held to discuss an identical variance on Roberts’ sign, which is located in front of Ruff to Pawfect Pet Salon and next door to Miracle’s flower shop.
Hart reviewed the same ordinance and called for comments from property owners or complaintants but none were made.
The board voted unanimously to approve the variance for Roberts’ sign under the same 9 p.m. to 7 a.m. conditions.
A third hearing was held to discuss a variance for a lighted sign at Andrew Automotive located on U.S. 27 in a highway business zone.
Although a family medical emergency prevented Andrew from being present at the hearing, Hart said all of the proper paperwork was prepared and all adjoining property owners were notified.
“So he has done everything he was supposed to do,” Hart said. “I have inspected the sign and it meets all of our requirements as far as the size and so forth, so the only thing he needs a variance for is for the light aspect of it.”
Hart said the illuminated sign will be placed under an existing sign and will emit light on both sides.
Unlike Miracle and Roberts’ businesses, Andrew Automotive is located in a business highway district.
“The only thing around him is a car wash, an empty lot, Valero, Precision Fitness, Boone Hardware, Pizza Hut. That’s the area,” Hart said. “He’s surrounded by businesses. The only house would be on the back side and he was notified because his property does touch. He doesn’t even live there now.”
The board unanimously approved the variance for Andrew’s sign.