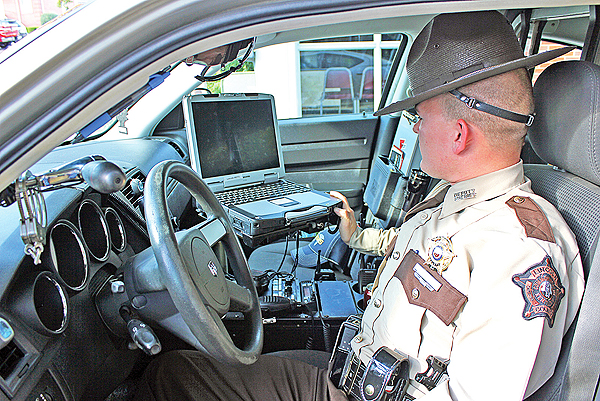 Photo by Abigail Whitehouse Lincoln County Sheriff’s Deputy Michael Mullins sits in a fully-equipped cruiser and details the cost of each piece of equipment.

STANFORD – It takes a variety of pieces to put together a complete uniform for a sheriff’s deputy and for smaller sheriff’s departments like the one serving Lincoln County, those pieces together often have an expensive price tag.

In total, a standard deputy’s uniform costs more than $3,000. The sheriff’s office also has several special deputies who volunteer for the department.

“It just keeps on adding up,” said Sheriff Curt Folger.

In addition to their uniform, deputies also need fully-equipped vehicles to travel across the county in and for a standard Dodge Charger Folger said it can cost up to $35,000 on state contract.

Mullins said for deputies, their vehicle is their office and much like an office, each cruiser require a equipment such as a laptop, portable printer, radio and radar. The radar alone costs about $1,000, Mullins said.

“You also need a digital camera to take pictures with and a voice recorder for investigations,” he said.

Luckily, the Lincoln County Sheriff’s Office has received items donated from other agencies like radars and tasers and thanks to a few grants through Walmart the department has purchased voice recorders and mobile printers, he said.

In those cruisers, deputies travel anywhere from 100 to 190 miles per day. Mullins said during a recent weekend shift he put about 350 miles on his cruiser.

“Our vehicles are our worst enemies right now,” the sheriff said.

Folger said the department has 16 vehicles, about half of which were donated by other agencies, and several others that are out of commission at any given time.

“That’s the thing people don’t realize – every vehicle we have usually ends up putting anywhere from 25,000 to 28,000 miles a year,” Folger said. “There’s about 480 county road miles. The bad thing of it is, each call is usually on the other side of the county. Very rarely do we have two calls located in the same sector of our county.”

Due to high mileage, maintenance work and accident repair, Folger said usually four or five vehicles are not running at certain times.

That’s why the sheriff’s office recently applied for a grant through the United States Department of Agriculture Rural Development to help with the purchase of four new vehicles.

“Grants are hard to find because most of your grants go to bigger departments,” Folger said. “Smaller agencies like us, we don’t constantly get opportunities for the big grants, we have to go and take whatever is left. We’re trying to keep these vehicles going to serve the citizens of our county. Times are tough, I understand, but we are doing whatever we can to keep the citizens of our county safe.”

In the last six months, Folger said vehicle maintenance and repairs alone have cost about $17,000. If it wasn’t for the elder Deputy Mike Mullins, he said the cost would have been even higher.

“He works on our cars, whatever he can do and he has saved us thousands of dollars in cost,” Folger said. “He needs to have a huge pat on the back for what he’s done for us. He’s an unpaid deputy and he’s doing all this and working on these vehicles for free.”
In the meantime, about 2,100-2,500 documented 911 calls per month are answered by deputies, Folger said. And that’s not including calls that come in directly to the sheriff’s office, deputies’ cell phones or in-person.

“You could probably add another 500-800 calls to that a month. Some of them are serious, some of them are not, but they are still calls we have to answer,” he said. “People in our county know that when things are happening that we’re going to be there for them.”
Recently, the sheriff’s office was faced with having to replace all of their computers, in the office and in the cruisers.

Sheriff’s Sgt. Ryan Kirkpatrick said he has ordered eight new tablets for each of the full-time units, all of which will be able to run Windows 10 – something that is required by an upcoming update of the Kentucky State Police system.

The total cost of the tablets is about $8,500, Kirkpatrick said. The department has also ordered six new desktop computers equipped with Windows 10, as well. People’s Bank also donated seven computers to the sheriff’s office, he said.

“This office has to be run like a business,” he said. “Our money comes from collecting taxes and serving papers. We don’t get excess money from the courts unless we serve warrants, some speeding tickets. We have to come up with innovative ways to make everything happen and so far we’ve been very good at it. But it might be catching up with us as far as the monies and our vehicles.”

SO YOU KNOW:
The Lincoln County Sheriff’s Office is always accepting donations. Contact (606) 365-2696 or visit 104 N. Main Street in Stanford for more information.