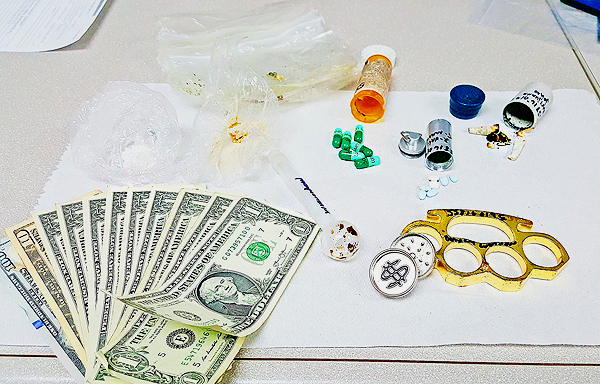 Photo by Abigail Whitehouse Police allegedly found several grams of crystal methamphetamine, as well as other drugs and drug paraphernalia during an arrest in the McDonald’s parking lot Tuesday.

STANFORD – A man was arrested on drug charges in the McDonald’s parking lot Tuesday after police found him asleep in his car.
A 36-year-old man was arrested Nov. 15 at about 1:45 p.m. by Stanford Police Officer Johnny Williams and charged with first-degree, second offense possession of methamphetamine; first-degree possession of a controlled substance (Xanax, valium); possession of marijuana; carrying a concealed weapon (brass knuckles); and possession of drug paraphernalia.
The man, who police did not identify due to the ongoing investigation, was allegedly found “slumped over his steering wheel” in the McDonald’s parking lot Tuesday afternoon.
Williams said when the man stepped out of the vehicle a joint, suspected to be marijuana, fell out of his pocket.
In the suspect’s front right pocket, police found a container of what he admitted was crystal methamphetamine. Also found during the search were 12 Xanax pills, valium, a set of brass knuckles, $125 in cash, a pipe used for smoking methamphetamine and a small grinder.
Police said about four grams of meth was in the container.
Williams said the suspect was coherent and that he told police he had stopped to eat and fell asleep.
Also found in the trunk of the vehicle were two “toy” guns that had been painted and marked to look like real hand guns, Williams said.
Williams said the investigation is ongoing.