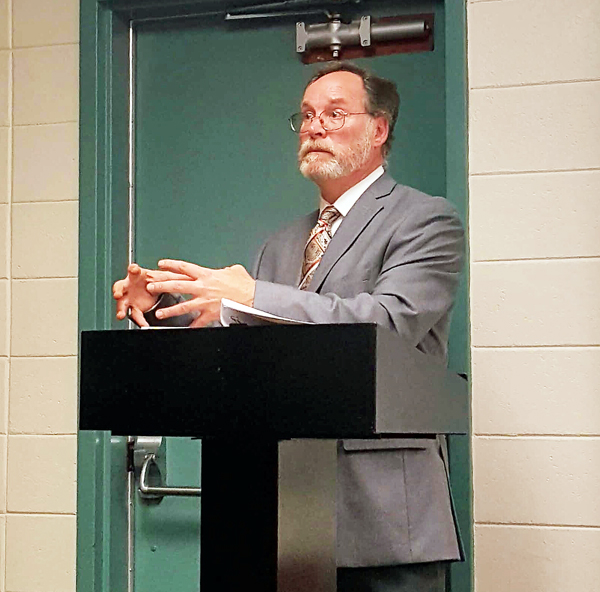 Photo by Abigail Whitehouse Joe Montgomery, of The Whiting Company, gives a financial audit report to Lincoln County school board members during the Nov. 10 meeting.

STANFORD – Based on the numbers, the Lincoln County School District had a good year financially, an auditor told board members last Thursday night.
Joe Montgomery, of The Whiting Company, highlighted the 71-page financial audit for the 2015-16 fiscal year and gave what he called a “clean opinion” of the audit.
“I think you’ve had a good year financially, based upon the numbers we have here,” Montgomery said.
While there were no material weaknesses identified in the internal control over financial reporting, Montgomery noted a “questioned cost” or deficiency in federal awards regarding the Child Nutrition Cluster.
“What we have is when the payroll was set up for the new year and the budget was set for food service to have a food service director, half of the salary was charged to food service,” Montgomery said. “They came out with what’s called the uniform guidance this past year that completely kind of changed the game and they added some layers of compliance.”
Basically, Montgomery said “you are to expend federal money on actual expenses and not budgeted expenses.”
“So what we had is, half of the salary was charged to food service, the other half was charged to other programs he’s involved in,” he said.
Montgomery said if time is split between programs, then there has to be documentation to support how much was charged to the programs.
“The problem we had was we didn’t have any documentation of that and without the documentation of that it becomes a questioned cost because there is nothing to show us that it was actual time spent and cost that should have been charged to that program,” he said.
The issue was brought to the district’s attention and was immediately corrected in the new year, he said.
Montgomery said the district received and expended $8,352,866 in federal awards during the 2015-16 fiscal year.
“So that’s the support that the federal government has provided this year,” he said.
The food service deficiency is noted in the auditor’s financial statement but Montgomery said it does not rise to the point of material weakness or systematic failure of internal controls.
The last several pages of the audit refer to prior year findings and how they were corrected.
“We go through to see if those have been corrected and let you know in the current year where they are,” Montgomery explained. “The majority of those were corrected and we did not find those as issues this year.”
Montgomery said there were a few issues which could “use a little cleaning up” but the audit did not find anything major to report.
Auditors noted there were instances where there was no proof of receipt of goods for purchases by the maintenance department and recommended that all purchases where goods are received that the person receiving them sign and date the invoice as proof that they were actually received.
According to the audit report, the issue has been addressed and corrective action has been taken.
Financial highlights in the audit report show the cash balance for the district as of June 30, 2016 was $9.67 million with a beginning cash balance of $8.5 million.
The ending cash balance consists of:  general fund of $8.671,174; special revenue of $617,489; capital outlay of $824,587, building (FSPK) fund of $524,073; construction fund of $42,114; food service of $151,948 and district activity of $74,400.
Other financial highlights:
• Government-wide net position increased $3,077,764 during the year. Total long-term obligations increased by $1,375,240.
• The general fund had $30.3 million in revenue, which primarily consisted of the state program (SEEK), property, utilities and motor vehicle taxes. An additional $4.76 million was received as loss compensation from the fire of Aug. 2014. There were $33.1 million in general fund expenditures.
• General fund revenue increased $184,058 from last fiscal year due to an increase in property tax rates. General fund expenses increased $1,686,823 largely due to the costs related to recovery from a fire at Central office in Aug. 2014.
• The financial statements reflect revenues of $7,050,812 from state on-behalf payments of district employees retirement contributions, health insurance, administration fees and technology with a like amount of expenses recorded.
In other business, the board:
• Heard an update from Trace Creek Construction on the progress of work being done at Stanford Elementary School.
The board was told the construction is progressing smoothly and there have been several positive comments about the alleviation of traffic issues on Danville Avenue.
Board members were told that contractors are hoping to pave the bus loop before the new year but with colder weather arriving, asphalt companies are getting ready to close.
Contractors are hoping the weather will hold off so roofs can be placed and they can welcome other trades to work.
The project is slated to be completed by Oct. 5 next year and so far, the construction is on schedule for that time.