Lincoln football’s season ends in first round of playoffs 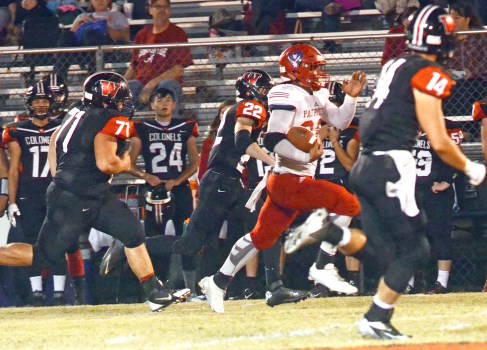 TRA CAREY of Lincoln County gets ahead of Whitley County defenders Lathen Roberts and Logan Lambdin as he breaks down the Colonels' sideline for a 79-yard touchdown run in the second quarter Thursday in the first round of the Class 5A playoffs. Carey rushed for 153 yards on 13 carries in the postseason opener but it would not be enough to help Lincoln to a win as Whitley rolled into the second round with a 55-21 rout. Photo by Nancy Leedy 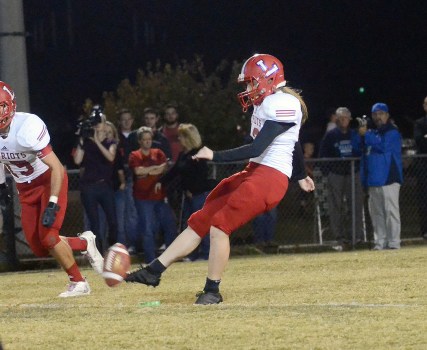 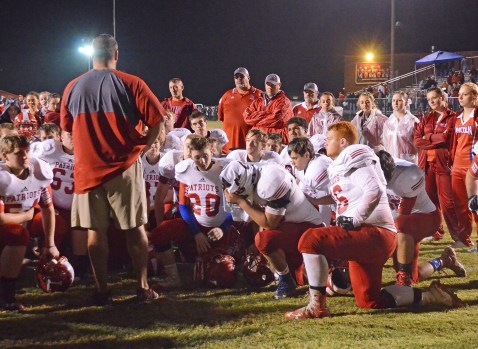 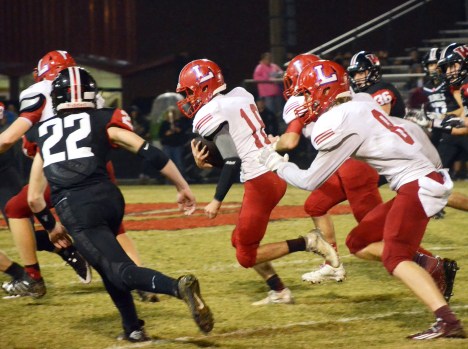 LANE SLONE of Lincoln gets some late-game yardage on this carry, running 17 yards for a first down. Photo by Nancy Leedy 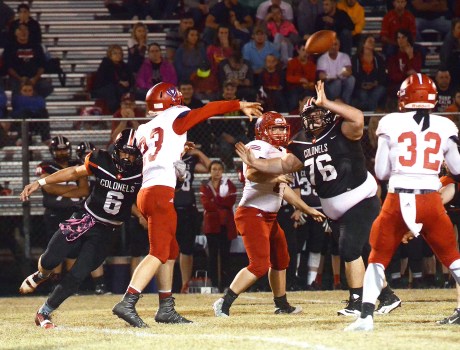 LINCOLN'S Noah Horton gets off this pass before Whitley's Dawson Powers can charge in and get a hand on the ball. Photo by Nancy Leedy 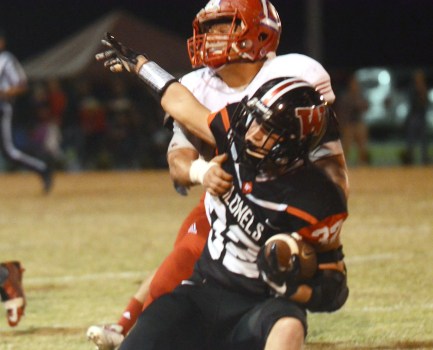 LINCOLN'S Carlos Nunez drops Whitley back Nate Johnson for a 3-yard loss on this second quarter carry. Johnson would lead the Colonel rush with 84 yards and three touchdowns on 15 carries in a 55-21 win over the Patriots. Photo by Nancy Leedy

WILLIAMSBURG — Lincoln County High School’s football team was back in the playoffs Thursday night looking to back up last year’s dramatic first-round win at Harlan County with a second straight year with a playoff victory.

However, it didn’t go particularly well for the Patriots, the fourth seed in District 7, as they went on the road and got rocked by District 8’s top seed Whitley County 55-21 in the Class 5A opener.

“It’s a tough way for it to end,’’ Lincoln coach Travis Leffew said. “The kids played hard. They came out prepared and ready to play. We just didn’t execute the way we like. It was just a tough night.’’

Colonel quarterback Dylan Wilson racked up 315 yards and four touchdowns on 13-for-17 passing to lead Whitley to the victory. Dawson Swain pulled in seven of those passes for 134 yards and a TD. Cameron Rose had two receptions for 88 yards and a score and Tyler Downs had two catches for 77 yards and two touchdowns. Nate Johnson led the team in rushing with 84 yards and three touchdowns on 15 carries as the Colonels amassed 439 yards offense.

Leffew said Whitley’s offense played exactly how he had expected.

“Everything they did we’d seen. There was no surprise what they did tonight,” he said. “Their ability to throw the ball is very impressive and we’ve got to get better in pass defense. There’s things that we’re jumping when we’re supposed to be staying back in the safety position. They executed their game plan well.”
Turnovers have been the bane of the Lincoln offense all season, and the miscues came early Thursday as the Patriots fumbled away the opening kickoff. But, despite the opening fumble, Lincoln (1-10) challenged Whitley (9-2) to a tight game early.

The fumble set Whitley up at the Lincoln 31 and, five plays later, Johnson scored the first of his three touchdowns from 14 yards out. The Patriots went 3-and-out on the next possession, but they evened the score at 7-all on their second drive, with Emmanuel Beasley taking a Tanner McAninch pass 65 yards to the end zone. The margin was just 14-7 late in the first, with Wilson connecting with Swain for a 30-yard touchdown.

Lincoln would add another long touchdown in the second quarter, as Tra Carey, who had a game-high 153 yards rushing on 13 carries, gained over half of his yardage on a 79-yard scoring run.

But there was just no stopping the Colonels. Whitley converted on five of its six possessions in the first half to open up a 35-14 halftime lead.

A second Lincoln fumble set up the first of Whitley’s three second-quarter touchdowns. The fumble, which came after a Noah Horton completion to McAninch, put the Colonels in prime field position at the Patriot 34. Johnson capped off the short drive with a 5-yard score to make it a 21-7 ballgame. Whitley then drove 81 yards to the goal line on its next possession, with the eight-play drive culminating in a 35-yard touchdown pass from Wilson to Downs for a 28-7 Colonel lead.

After Carey’s 79-yard TD, Whitley was back on the move. The Colonels went 64 yards in seven plays, with Sean Hickey scoring on a 6-yard run to extend their lead to 21 points at the half.

“Turnovers got us again right from the get-go,” Leffew said. “We keep hurting ourselves with the turnovers. We’ve got to learn to take those away.”

Turnovers would come back to bite Lincoln in the second half as well.

Whitley got the ball to start the third quarter and needed just two plays to go 80 yards for a score. Wilson hit Swain for a 1-yard pass before connecting with Rose for a 79-yard touchdown pass. Then, Austin Caldwell intercepted McAninch on Lincoln’s longest sustained drive of the game (12 plays) to set up a 4-yard touchdown run by Johnson and Zach Faulkner followed with a pick off Noah Horton to set up a 42-yard touchdown pass from Wilson to Downs to push the Colonel lead to 55-14.

Lincoln would answer last in the game, with Carey scoring on a 41-yard run with 10:45 to play, but it would be Whitley moving on for the win and a berth in the postseason’s second round.

“They did a great job defensively,” Leffew said of Whitley. “They ran the 3-man front. They’ve got a big boy on the defensive line that did a great job of keeping us from running up the middle, and we weren’t able to put ourselves in the right position to block them at times.”

“It was a tough ball season. It’s tough to get through a 1-10 season and continue to play. And these kids continued to play,” he said. “What I spoke to the guys about (postgame huddle) is that there are two things that happen from a ball game, you either win or you learn. This season’s been a lot of learning for us. It’s going to help these kids in life. It’s going to teach them to strive for the best and challenge themselves as they go. That’s what this season did. I’m very proud of these guys. I wouldn’t change this group for anybody.”

Nine Patriots stepped onto the field at Colonel Stadium for their final high school game.

“This senior group did do a great job of setting the way and we’ve got to follow that and come back harder,” Leffew said. “We were saying bye to a tremendous group of seniors, senior managers that we won’t get back. Some of the best athletes that have ever played in Lincoln County. It was an honor to coach them.”

Class 5A Football Playoff First Round