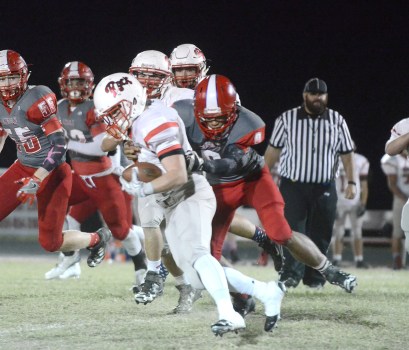 EMMANUEL BEASLEY of Lincoln County comes in from behind to take down Rockcastle County back Jaden Payne in Friday's regular-season finale at Death Valley Stadium. Payne rushed for 52 yards and a touchdown on eight carries in the Rockets' 55-8 rout. Photo by Nancy Leedy 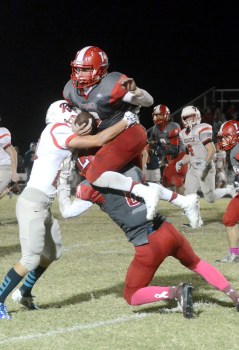 LINCOLN quarterback Tanner McAninch leaps over a teammate to try for some extra yardage only to be stopped by a Rockcastle County defender. The Patriot senior, who had 217 rushing yards last week, was held to minus 12 yards rushing in Friday's 55-8 loss to the Rockets, with only one carry for a gain. Photo by Nancy Leedy 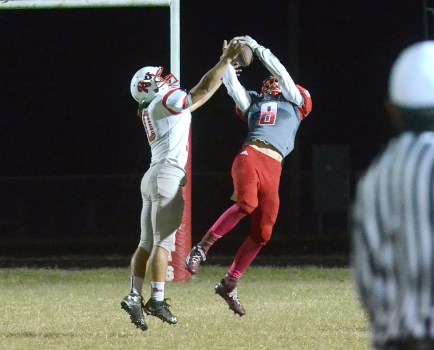 JOSH SALYERS of Lincoln County gets the grab on this 24-yard pass from Tanner McAninch in the first quarter of Friday's 55-8 loss to Rockcastle County. Attempting to break up the play was Rocket Chayse McClure. Photo by Nancy Leedy 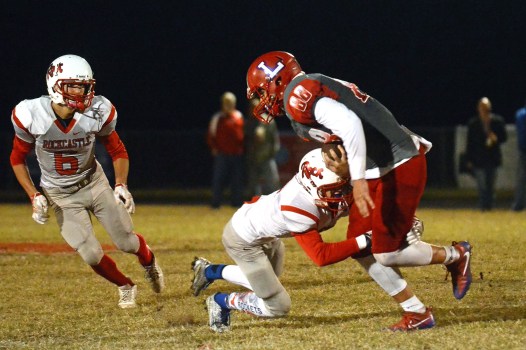 LINCOLN RECEIVER Sawyer Carrier picks up 13 yards on this second-quarter reception before being tackled by Rockcastle County defenders Friday night. Carrier had three catches for 42 yards in the loss. Photo by Nancy Leedy 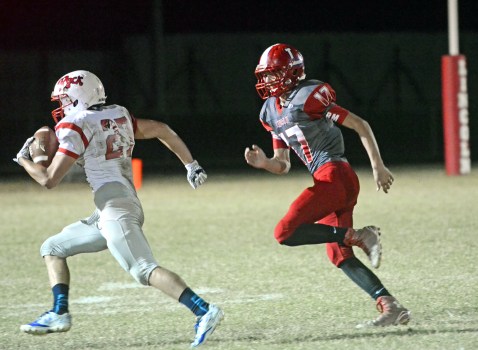 But the Lincoln rush would be a non-factor against Rockcastle County Friday at Death Valley Stadium with Carey carrying the ball just three times for one yard and McAninch carrying it five times for minus 12 yards as the Patriots were shot down 55-8 on Senior Night by the visiting Rockets.

Senior quarterback Chayse McClure, one of eight Rocket backs getting a touch on the ball in the game, rushed for 170 yards and two touchdowns on eight carries to lead Rockcastle as it racked up 432 rushing yards and 490 total yards while holding Lincoln to just 112 total yards offense.

But, once again, Lincoln coach Travis Leffew says the Patriots are as much to blame for the team’s loss as their opponent.

Rockcastle (9-1) had 20 points on the scoreboard before Lincoln (1-9) got a second touch on the football in the game. The Rockets scored two touchdowns in a span of just 16 seconds, driving 66 yards to the goal line on the opening drive then adding seven points after the Patriots fumbled away their first possession on the first play from the line of scrimmage. Rockcastle then recovered the onsides kick and tacked on another score.

Rockcastle would put up 22 more points before the half to go up 42-6 and start a running clock.

“We came out scared and right from the get-go, turnovers,” said Leffew. “We were scared up front. We were scared everywhere on the field. People were leaving the ballgame left and right, and that’s tough on Senior Night. The challenge has to come of toughness.”

Holdan Barnett, who rushed for 95 yards and two touchdowns on 10 carries, got the Rockets on the board with a 3-yard run with 7 minutes, 55 seconds remaining in the first quarter. The scoring run was the culmination of a 66-yard, nine-play opening drive.

Lincoln’s Lane Slone returned the ball 18 yards to the Patriot 38 on the ensuing kickoff, but a fumbled handoff on the first play gave the ball back to the Rockets, setting them up at the Lincoln 36. On the very next play, just 16 seconds after Barnett’s score, McClure hit Michael Tomlinson for a 36-yard touchdown pass to make it 13-0.

The Rockcastle offense was right back on the move after the kickoff, recovering the onsides kick at the Lincoln 47. Barnett converted on two 4th-and-2 situations with runs of 26 and 3 yards to move the ball down to the Lincoln 2, then McClure scored on a keeper to extend the Rocket lead to 20-0 with 2:36 left in the first quarter.

Lincoln managed to interrupt the Rockcastle scoring run before the end of the first period. The Patriots started their second possession at their own 22 and went the 78 yards to the end zone in five plays, with McAninch connecting with Carey for a 7-yard touchdown pass with 33.2 seconds left. The score stood at 20-6 at the end of the first after Emma Kaiser’s point after kick hit the cross bar and fell back into the field of play.

But there would be no stopping the Rockets, who scored on eight of their nine possessions in the game.

Rockcastle needed just four plays to hit pay dirt on their fourth possession. The Rockets started at the 50 and McClure zigged and zagged his way through the Patriot defense, going 36 yards to the goal line just seconds into the second quarter.

Just like in the first quarter, Rockcastle would hit paydirt three times in the second. Barnett capped off an 86-yard scoring drive with a 1-yard run with 6:52 left in the half, a drive that was helped along by a 56-yard first-down run by McClure. Lincoln fumbled away the following possession and, with 5:00 on the clock, Payne scored from 7 yards out to make it 42-6 and start the running clock.

Rockcastle scored one touchdown in both the third and fourth quarters. Brent Lovell scored on a 2-yard run in the third and Noah Prickett went 25 yards to the goal line on the final play of the game.

Lincoln’s only score of the second half was a safety. After Rockcastle denied Lincoln a touchdown with a defensive stand at the 1, the Patriots tackled Prickett in the end zone.

With the regular season now in the books, Leffew says Lincoln has to focus on the postseason.

Lincoln will not have as much time to prepare for its first-round opponent in the Class 5A playoffs, Whitley County, with the game rescheduled for Thursday, Nov. 3, due to Whitley’s advancing to the state volleyball tournament.

“It’s a short week with the game on Thursday. So we’ve got to come in focused on Sunday and then go out and execute our game plan Thursday,” Leffew said. “I felt like we had a great game plan tonight. It just wasn’t executed. We had guys defensively that were touching the (Rockcastle) running back every play in the backfield, but couldn’t bring him down.”