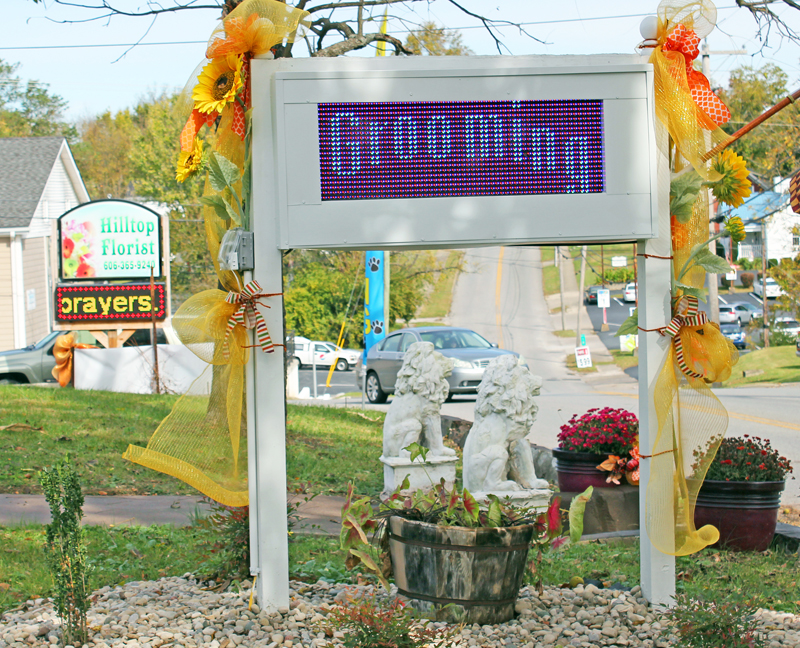 Photo by Abigail Whitehouse Two signs outside of Hilltop Florist and Ruff to Pawfect Pet Salon have been a hot-button topic in Stanford after nuisance complaints were filed against the business owners last week.

STANFORD – A pair of local business owners took to social media for support last week after nuisance complaints were filed against them for the illuminated signs outside of their stores.
Hilltop Florist owner Merle Miracle and pet groomer Dillon Roberts have spent the last few months fixing up a neglected piece of property next door to the flower shop on Lancaster Street, which is now home to Ruff to Pawfect Pet Salon.
But when both business owners received a certified letter in the mail stating that nearby homeowners had filed a nuisance complaint against them, the pair posted the information on Facebook and immediately garnered hundreds of comments from locals in support of the stores and their signs.
The post encouraged those supporters to call city hall and the number listed for code enforcement – which is actually the Stanford Fire Department’s phone number – and stated that Stanford Mayor Eddie Carter should look at his own property across the street before coming after them.
“I guess the 25 cars that looks like a car lot parked across the street at the mayor’s house doesn’t depreciate our businesses and the grass that grows knee-high, or the junk laying in people’s yard across the street, or maybe even the street fights that happen almost every day in the big white house across from us,” the post reads.
Miracle said he has never said anything about Carter’s property but it is not up to code in his opinion.
“Ive been here for eight years and never said a word,” he said. “If my sign is bad, then that is a junkyard.”

The city’s nuisance
ordinance
Carter said following through on the complaints is not a personal vendetta and the legality of the signs are a completely separate issue from the nuisance complaints.
The specific ordinance cited in the letters mailed to the owners fall under the city’s general regulations and nuisances and states that the sign being on at night constitutes a nuisance.
Public nuisance is defined as “any act, thing, occupation, condition or use of property which shall continue for such a length of time as to (1) substantially annoy, injure, or endanger the comfort, health, repose or safety of the public” or “Essentially interfere with the comfortable enjoyment of life and property, or tend to depreciate the value of property of others.”
The two subsections of the ordinance were highlighted within the letters.
The mayor said while Hilltop Florist’s sign was dealt with and approved by a previous city administration, the recent controversy didn’t arise until Roberts opened the pet salon next door to and installed a similar digital LED sign out front.
Carter said Roberts was approached by the city’s code enforcement team who told him the sign was illegal and advised him to seek a variance from the Board of Adjustments. For a while, Carter said Roberts was turning his sign off at 9:30 p.m. each night but recently it has been on all night.
“Health – when you can’t sleep at night and you work all day it can affect your health. That’s where we’re saying it’s a nuisance,” Carter said. “We’re not into the legality of the sign in any way here. The two houses have filed a complaint. They put it in writing, I didn’t do it.”
Carter said he appreciates what Miracle and Roberts have done for the city but Roberts should have followed the proper procedure before installing the sign – gone to planning and zoning and then to the board of adjustments to seek a variance.
“That’s the proper procedure that should’ve been followed and it wasn’t,” Carter said.
Roberts, however, said he did attempt to do follow those procedures, paid $25 for the sign permit and has since put in an application with the board of adjustments.
In the meantime, the nuisance complaints were filed against both businesses and Miracle said that’s when things got contentious.
“I hate to tell you, if my sign depreciates this community then the junkyard really depreciates it. He (Roberts) has taken this place that was an eye sore for the city and has turned into a very nice place.”
Roberts said before the complaints he had noticed a Facebook post by the councilwoman’s daughter complaining about his lights and after speaking with her he decided to turn the sign off at 9:30 p.m. each night.
“After that, we thought everything was fine, until we kept hearing things from people and then got letters in the mail,” he said.
Miracle said he decided to put the information on Facebook because he believes the city’s residents should be aware of the situation.
“The citizens need to know what’s going on in this town,” Miracle said. “If I was a business looking to come to Stanford I would run.”
In the city’s last regular council meeting it was brought to the council’s attention that John Sallee was serving on both the council and the board of adjustments, which is prohibited according to city ordinance. Miracle argued that even if the proper procedures are followed, an objective ruling can’t be found because there is conflict of interest.
Both Miracle and Roberts had five days after receiving the letters to request a hearing before the code enforcement team before being fined on a daily basis. Hearings were scheduled for Miracle at 9 a.m. and Roberts at 10 a.m. on Wednesday to hear their individual cases.
Miracle said aside from providing a daily prayer, featuring local obituaries and highlighting local events in Stanford, the signs are also a deterrent for robberies.
In the last two-and-a-half years, Miracle said Hilltop Florist has been broken into twice and at least $40,000 in merchandise was stolen during one robbery. Since the sign was installed, Miracle said he hasn’t had an issue.
“It’s just frustrating. I’ve been here two-and-a-half years and my sign has never been a problem,” Miracle said. “I can turn my sign off at night if I have to but if I have to then so should every single other one in this town.”
Stanford Fire Chief Scott Maples will be overseeing the code enforcement hearings. Maples will issue a ruling on each case and said the business owners can either agree or disagree and pursue other legal avenues.
Maples said since the Facebook posts the fire department has received several threatening phones calls and there have been cars driving by honking their horns as they pass the station – some even stopping in the road and holding down their horns.
Miracle and Roberts both said they didn’t condone that behavior.
The two complaints were filed by Victor Carpenter of 101 West Maxwell St. and Mrs. (first name unclear on form) Pittman of 403 Lancaster Street.
See next week’s print edition of The Interior Journal for follow-up on the hearings held Wednesday morning.