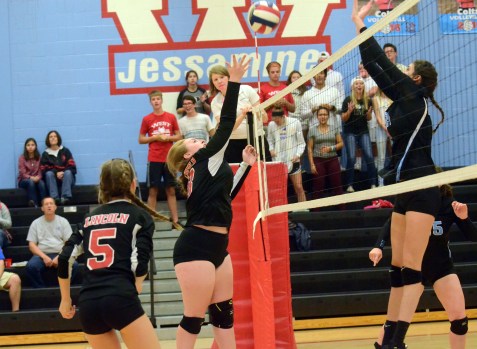 PEYTON GRIFFIN of Lincoln attempts to get a shot over Kala Vanderweele of West Jessamine at the net in regional volleyball action. Photo by Nancy Leedy 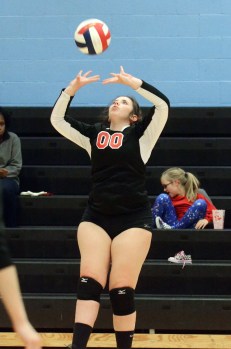 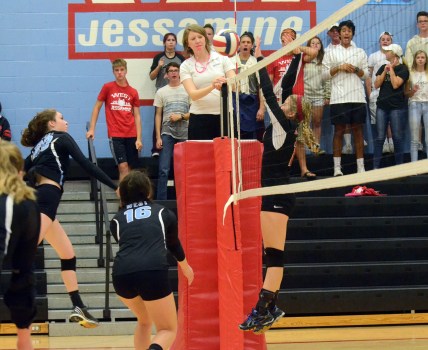 SAVANNA SMITH of Lincoln County goes up for this block of a kill attempt by Kala Vanderweele of West Jessamine Tuesday in regional action at Nicholasville. 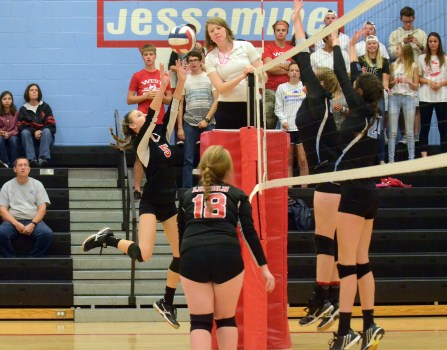 LINCOLN'S Jasmine Whited goes up high to try and get this hit over West Jessamine blockers in Tuesday's 12th Region quarterfinal round at Nicholasville. West Jessamine, the region's top seed, eliminated Lincoln from the postseason with a 3-0 win. Photo by Nancy Leedy 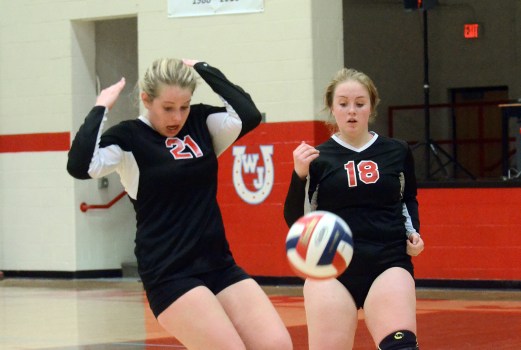 LINCOLN'S Jessie Wilson pulls her hands back as she and teammate Peyton Griffin try to avoid contact with a wide shot by West Jessamine. Photo by Nancy Leedy

NICHOLASVILLE — West Jessamine looked every bit the part of the No. 1 team in the 12th Region in its win over Lincoln County Tuesday.
Lincoln took its shot at trying to knock out the 12th Region Tournament’s top team, but the Lady Patriots met the same fate of all the Colts’ regional foes this season. The Lady Patriots were handed a 3-0 loss in Tuesday’s quarterfinal round at West Jessamine, going down 5-25, 13-25, 13-25 in their season-ending match.
West Jessamine improved to 28-8 overall and 11-0 in the region with the win. The Colts have won 15 of their last 17 matches and are riding a 10-game win streak.
Lincoln ends the season at 17-15.
“That was a very tough order,” Lincoln coach Samantha Torres said of the Lady Patriots having to face off with the Colts in the first round. “They are the No. 1 team in the region for a reason. They are a really good team, I think the girls knew that going in and I think they psyched themselves out a little bit. Then when they got in and saw that it was possible, then it was kind of too late.”
The Lady Patriots earned all their points on sideouts in the first game. The Colts were up 9-4 when Grace Harvey stepped in to serve. West would rack up 14 straight points off her service game to go up 23-4 before moving on for the 25-5 win.
“They definitely serve well and have a lot of strength,” Torres said. “That’s what makes them so good.”
West never trailed in the match, exploding out to leads of 13-2 in the second game and 23-6 in the third game. Lincoln would score on more than sideouts in the last two games, though, putting together 5-0 runs in both. The Lady Patriots scored five straight points off Haley Bowen’s service in game two and Hannah Jacobs came off the bench to serve up five unanswered points in game three.
“There’s no denying that they are a good team, but I told them (Lady Patriots) I know we have a lot of fight and a lot of talent and, if we play like we can, we should be able to hang with them.” said Torres. “But they’re young. They’ve got nerves. And we weren’t able to do that. I think it’s good that we got them now because we are going to see them again. So next year when we see them we won’t be as nervous.”
Jessie Wilson had two kills and four digs for Lincoln, Hannah Jacobs had four aces, Haley Bowen had two aces and Savanna Smith and Ashlyn Jarman each had two digs.
Tuesday’s loss brings Lincoln’s season to an end as well as the high school careers of seniors Sydney Puckett and Shelby Creech but, while disappointed with the loss, Torres is very optimistic.
“As far as this game goes, no it didn’t go the way that we wanted. But it’s good experience for next year because we expect to be back,” she said. “We cannot complain about the season that we had. We had a really good season. I’ve got mostly sophomores and freshmen so getting to region – who expected that out of us. We had a really good season and we’ll be back.”