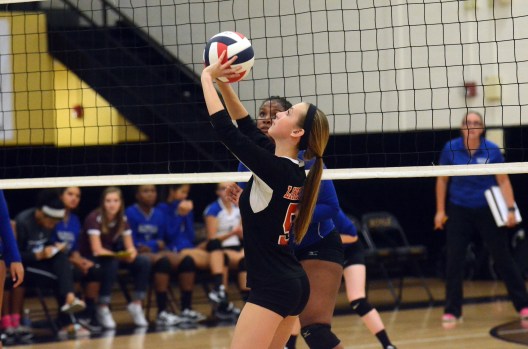 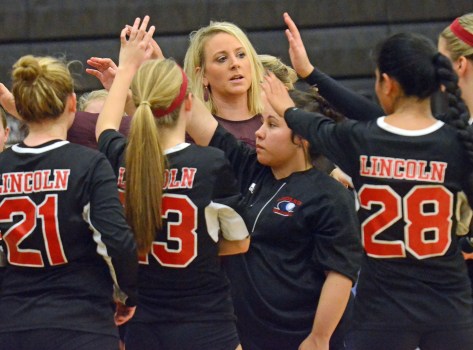 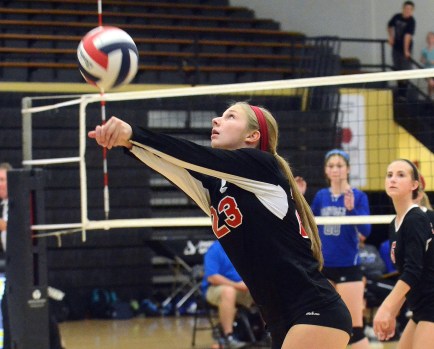 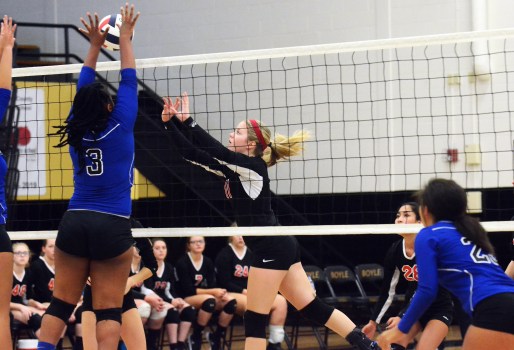 LINCOLN COUNTY’S Savanna Smith puts the ball up and over the block attempt of Danville players, including Alexis Branscum (3). Smith and her Lady Patriot teammates earned the team’s first regional volleyball berth since 2012 with their 3-0 win over the Lady Admirals Tuesday in the 45th District Tournament. Lincoln will face host Boyle County in the championship game today (Thursday) at 6 p.m. Photo by Nancy Leedy 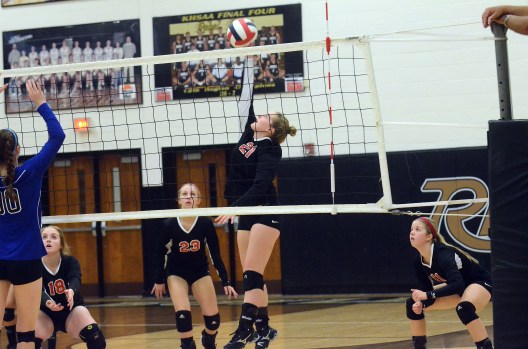 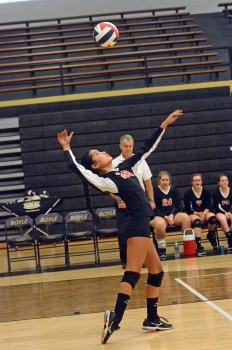 DANVILLE — In the regular season, Lincoln County won both of its district matches with Danville in three straight sets.
The Lady Patriots did the same thing again Tuesday night in the semifinal round of the 45th District Volleyball Tournament at Boyle County High School.
Lincoln, the No. 1 seed in the tourney, fell behind briefly at the start of the first set of the match, but after a 10-2 run to overtake Danville the Lady Patriots didn’t have any issues, winning 25-17, 25-15, 25-10 over the fourth-seeded Lady Admirals.
“They wanted to win and they came out and they played hard,” Lincoln coach Samantha Torres said. “They definitely played like the team they have been all season. They played well together and had a lot of chemistry.”
While some teams overlook opponents they’ve manhandled in the regular season when they meet again in the postseason, Torres said she did her best to eliminate that problem.
“It was a big deal to remind them that we couldn’t overlook Danville, especially where last week we didn’t do as well as we wanted,” she said. “We had to work to forget that we won in straight sets in the regular season. We had to forget that we were coming off a bad week. We knew we had to focus on coming in tonight and playing our game.”
Lincoln (17-13) moves on to face No. 2 seed Boyle County (15-18) in the district championship game Thursday at 6 p.m.
Danville (5-21) jumped out to a 5-3 lead over Lincoln in the first set only to have the Lady Patriots answer with their 10-2 run to surge ahead 13-7.
Lincoln never trailed again.
The Lady Patriots led by as many as 10 points, 23-13, before claiming a 25-17 first-set win. Savanna Smith, who finished with four aces and three kills, was on service during a six-point run as Lincoln put the set away.
Haley Bowen, who had two aces in the win, was behind the service line in a 5-0 run in the second set as the Lady Patriots distanced themselves from the Lady Admirals to win 25-15. Lincoln’s largest lead in the set was 12 points.
The Lady Patriots scored eight points in the third set before the Lady Admirals ever got on the scoreboard. Jasmine Whited, who had four aces and 14 assists for Lincoln, opened serve in the third set, and her service game and the team’s strong rallies helped them to an 8-0 lead as they rolled 25-10 for the match win.
“They controlled the match,” said Torres. “That’s what we knew they could do. They were definitely focused. They were consistent, served well, played aggressive. They had the chemistry going.”
Tuesday’s win not only advances Lincoln to the district championship game against Boyle County, it also earns the Lady Patriots a berth in next week’s regional tournament at West Jessamine, Lincoln’s first regional appearance since 2012.
“It’s huge. We haven’t been in a few years,” Torres said of Lincoln’s making regionals. “We’ve been trying to get ourselves in position to get back, so it’s a big deal to be going back this year. The ultimate goal for the team is to win the championship and get to region. We couldn’t be more proud.”
Taryn Johnson had six aces and three kills for Lincoln Tuesday night, Jessie Wilson had six kills and Peyton Griffin had two aces and four kills.