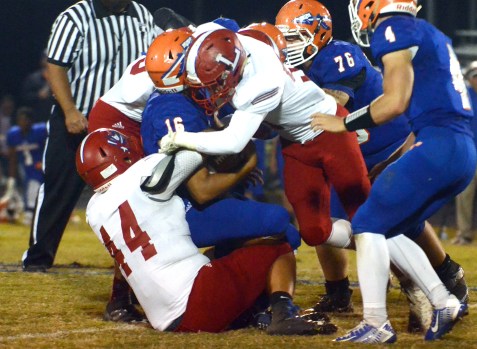 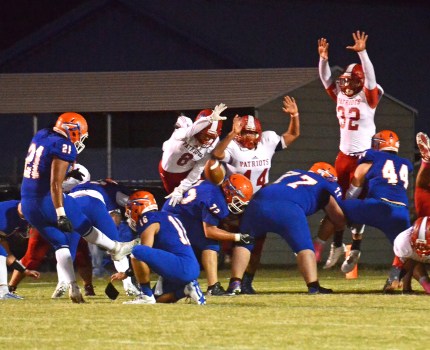 LINCOLN'S Josh Salyers (8), Carlos Nunez (44) and Tra Carey (32) try to block this first-quarter extra point kick by Southwestern's William Avina. Avina missed on this attempt but would convert on four other attempts and a 30-yard field goal. 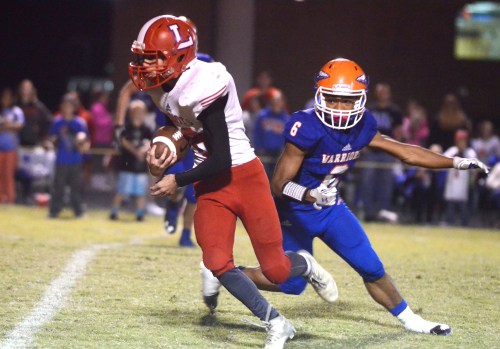 PATRIOT BACK Lane Slone gets past Southwestern defender Braylen Smalley on this fourth-quarter carry in Friday's 27-7 loss to the Warriors at Somerset. 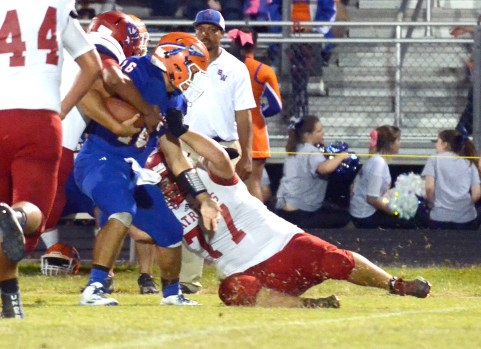 SOMERSET — For the second straight week, the Lincoln County football team found itself on the wrong side of the scoreboard in Somerset.
In its second district contest of the year Friday night, Lincoln met up with another strong regional contender, falling to Southwestern 37-7.
Lincoln (1-7, 0-2) got off to a strong offensive start, with Tanner McAninch taking the first carry of the game 41 yards to the Southwestern 28 and the Patriots marching down to the 4-yard line. But the opening drive ended with a whimper as Lincoln fumbled the ball away.
And the Patriot offense floundered the rest of the way against the Southwestern defense as the Warriors rolled.
“First drive was great, but after that we went back to the first of the year,” Lincoln coach Travis Leffew said. “We’ve got to be able to capitalize on the big plays. We’ve got to be able to stop them defensively and capitalize on offense. We throw go-routes like everybody, but we don’t pull the ball in. We run plays just like everybody else, we just don’t capitalize on it. A lot of it tonight, the offensive line got their tail kicked up front. Great first drive, but after that they got their tail kicked and it was embarrassing to watch them play up front.”
Southwestern (6-2, 2-0) relied heavily on the explosive running of junior running back Patric Edwards, who led the charge on the ground with 138 yards and two touchdowns on 10 carries. JP Vaught exploded for big yardage on his only carry of the game, going 91 yards to the end zone on the Warriors’ first offensive play. Vaught also had two receptions for 67 yards, including a 55-yard touchdown pass from Brandon Pruitt. Pruitt went 9-for-15 for 159 yards as Southwestern racked up 445 yards total offense.
“They are definitely a region title contender. That’s what everybody’s picked them as. They are a great football team,” Leffew said of the Warriors. “To be 37-7 better than us, I don’t think they are. They play harder at times in a ballgame and play positions in the ballgame. We’ve got to get our guys to understand why they’re playing the positions and why they have to be there and their responsibilities to get better as a team.”
Lincoln’s turnover on the opening drive, which set up Vaught’s 91-yard touchdown run, was the first of six Patriot fumbles in the game, four which resulted in change of possession. Lincoln also fumbled away its second possession, setting Southwestern up at midfield. However, David Brock would kill the drive just four plays in by picking off Pruitt. After two punts and a loss on downs, Drew Sawyers recovered a Lincoln fumble on an onsides kick which resulted in a Warrior field goal. The Patriots’ first drive of the second half would end in a turnover as well, followed by a Warrior touchdown.
“We put the ball on the ground a lot tonight,” said Leffew. “We just can’t do that. We’re not a team that can put the ball on the ground. We’ve got to maintain the ball throughout the whole ballgame.”
Lincoln’s most sustained drive of the first half came midway through the first quarter after the Brock interception. The Patriots drove to the Southwestern 42 in 10 drives before Trey Cummins was called on to punt the ball.
Southwestern fielded the punt at its own 28. Two plays after the kick, Edwards barreled through the Lincoln defense and went 75 yards for a touchdown. The Warriors were back in the end zone on their next possession, too. Pruitt capped off the 57-yard, 3-play drive with a 55-yard touchdown pass to Vaught to put Southwestern up 20-0.
The Warriors would not reach the end zone on their final drive of the half, but they would pick up points as William Avina made good on a 30-yard field goal attempt to make it 23-0 at the break.
Southwestern continued its scoring run in the third quarter, adding two more touchdowns. Edwards went 6 yards for his second TD at the 9:52 mark of the third quarter then Pruitt carried the ball in on a 4-yard run with 2:57 showing to make it 37-0 and start the mercy rule running clock.
Lincoln’s longest possession (15 plays) and only scoring drive (77 yards to the goal line) of the game came on its sixth offensive drive and culminated in Josh Salyers’ 15-yard touchdown pass from McAninch.
The Patriots finished with 283 yards offense. McAninch had 76 rushing yards and went 14-for-27 passing for 150 yards and a touchdown. Tra Carey ran the ball 16 times for 53 yards. McAninch spread his passes out over six different receivers. Sawyer Carrier had four catches for 56 yards and Salyers had four for 39 yards and a touchdown.
As Lincoln heads into another district game, Leffew says that depth continues to be one of the Patriots’ biggest shortcomings.
“Depth is a huge factor for us right now. I feel like I say that every week, but it is,” he said. “Guys are going from one way to the other way and nobody’s coming off to the sideline right now because of depth and experience. We can’t rest our guys and the teams we’re playing are able to do that. That keeps them fresh and gives them an advantage.”
Depth or no, Leffew says the Patriots have to put the Southwestern loss behind them and prepare for South Laurel.
“That’s done now. We can’t change that,” he said. “All we can do now is go and learn from film and work hard to get ready for South Laurel.”