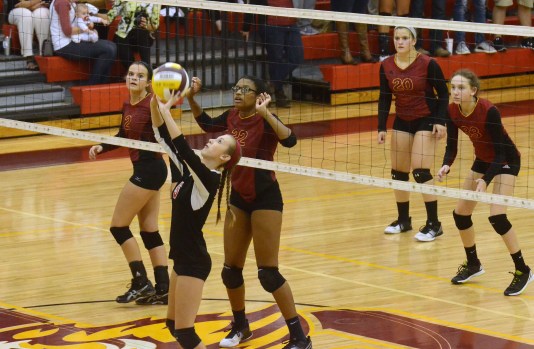 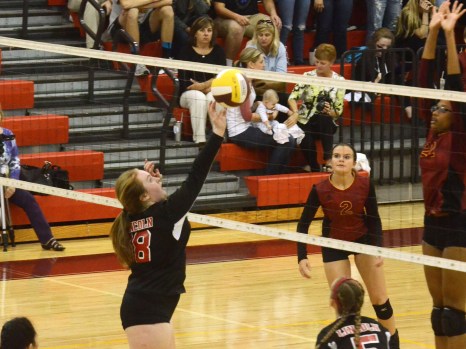 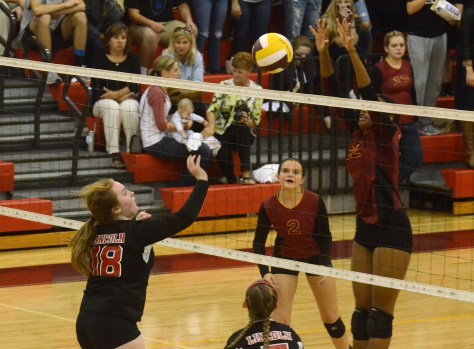 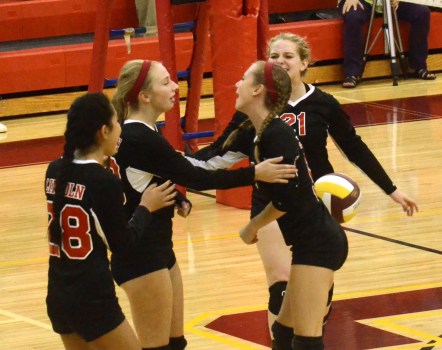 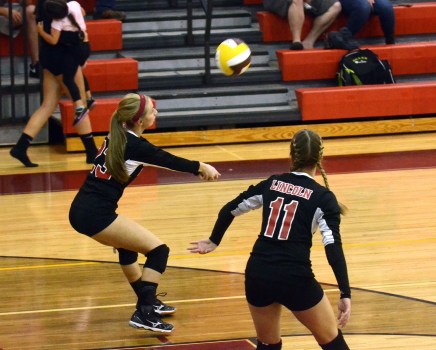 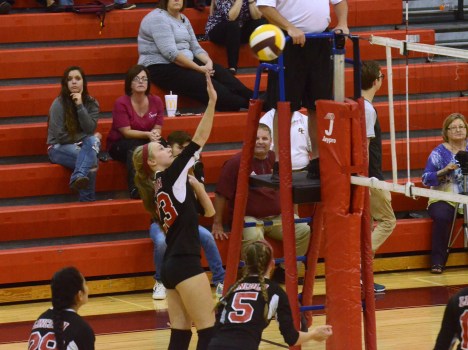 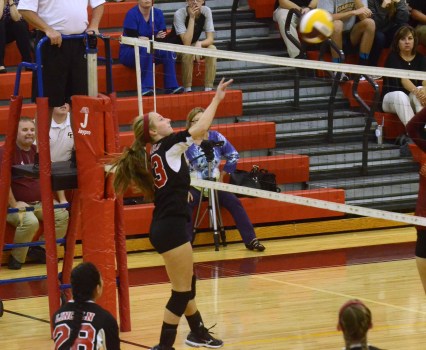 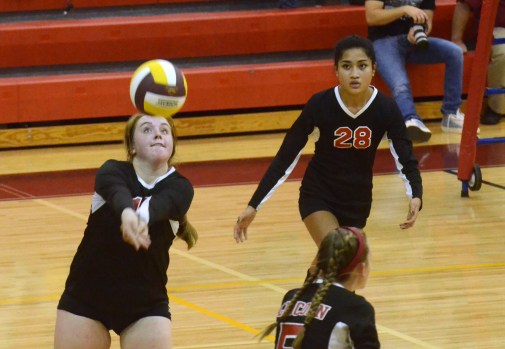 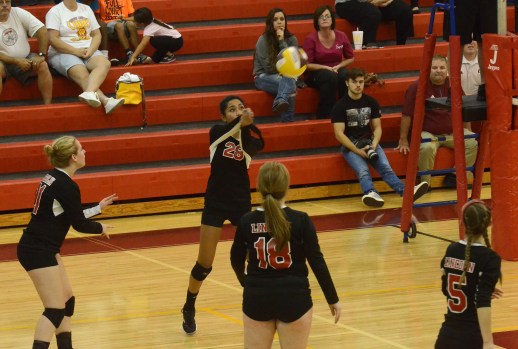 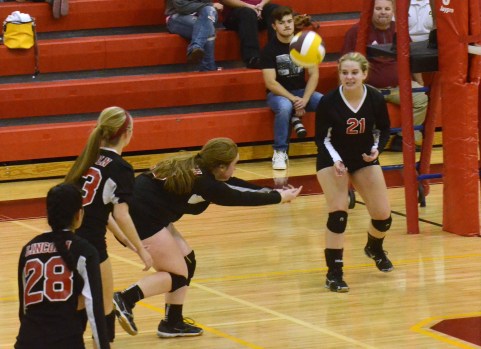 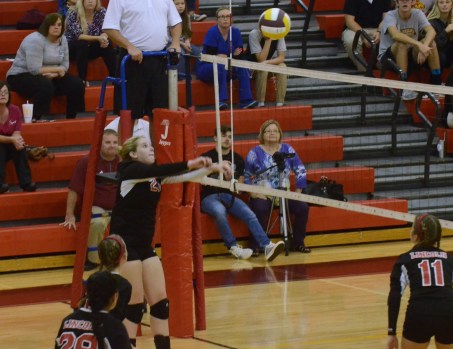 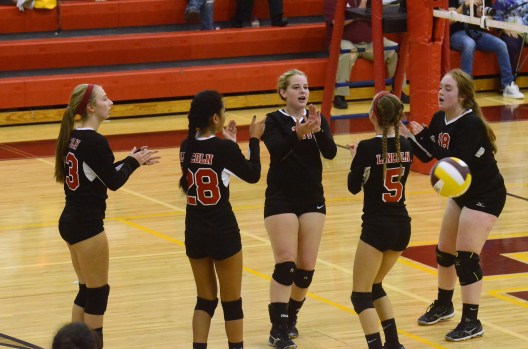 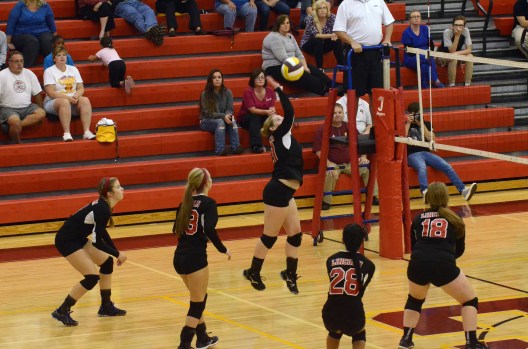 LADY PATRIOTS Savanna Smith, Taryn Johnson, Haley Bowen and Peyton Griffin keep an eye on the ball as teammate Jessie Wilson goes up for a hit in the team’s 3-2 win at Garrard County Monday night. The win gave Lincoln the district’s top seed in the postseason tournament. 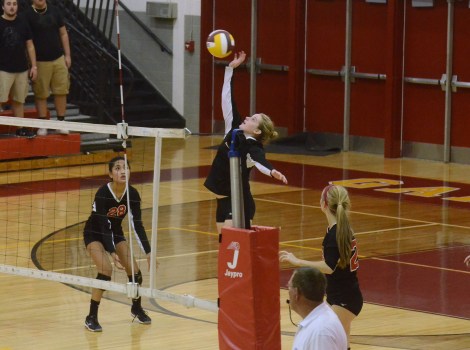 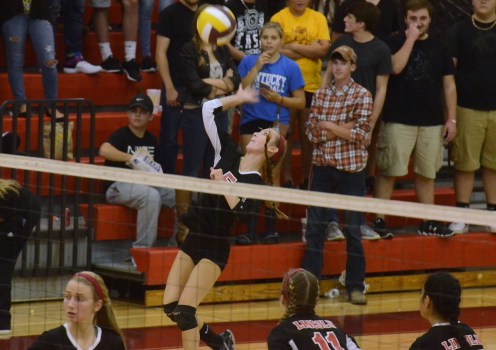 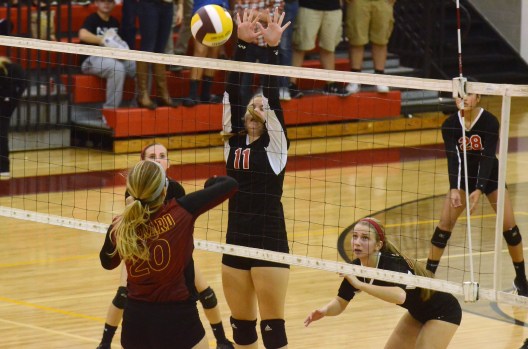 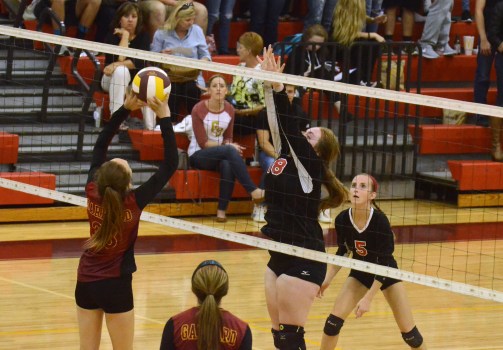 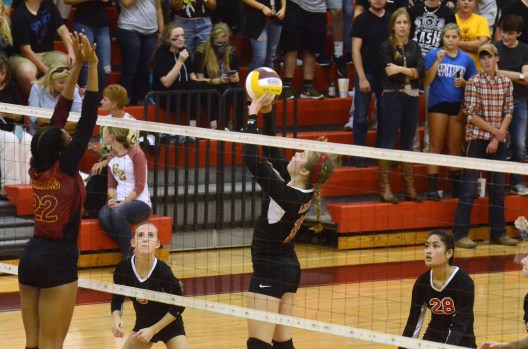 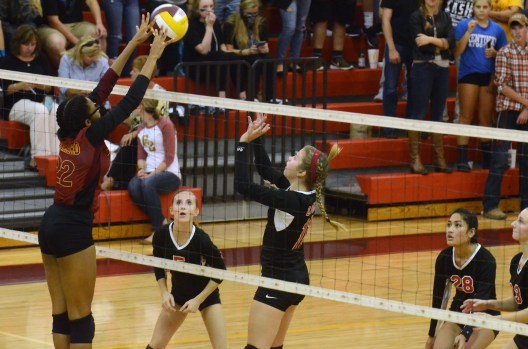 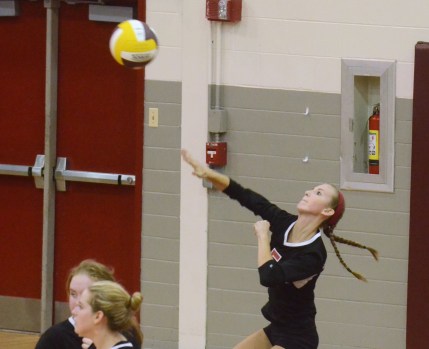 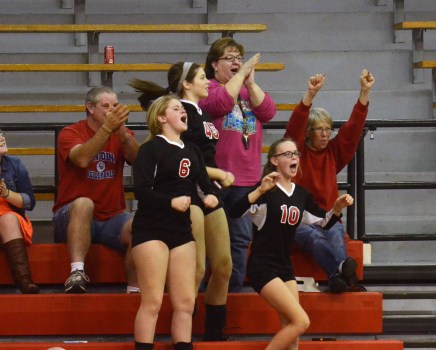 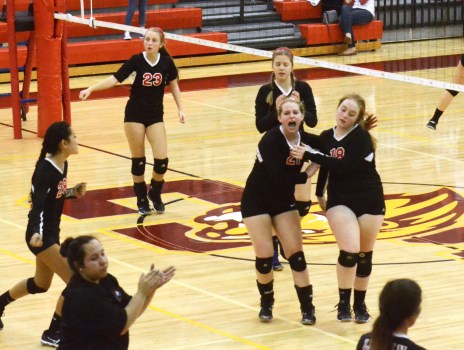 LANCASTER — The 45th District’s top two volleyball teams closed out the district’s regular-season schedule with a bang Monday night, as visiting Lincoln County played spoiler on Garrard County’s Senior Night, prevailing over the Lady Golden Lions in a thrilling five-set match, 25-16, 25-27, 25-21, 17-25, 15-13.
“It’s always such a struggle (against Garrard) just because they are such a momentum team,” Lincoln coach Samantha Torres said. “They get going all nice and uplifted and they fight back harder. Then we get a little frazzled and we have to fight back harder. We just always have a tough time against them.”
Both teams came into the match knowing that the winner would be in the driver’s seat heading into the postseason tournament. With so much on the line, a big crowd helped push the match to playoff-like levels of intensity.
“A lot was riding on this match,” said Torres. “You could feel it with all the support from the crowd and with the intensity that both teams played. There was a lot of fight out there on that floor and we won the fight to clinch No.1 for us.”
The Lady Patriots, who have now won six straight matches, trailed 1-0 early in the first set before breaking on an 8-1 scoring run to go on top to stay. The Lady Golden Lions (7-17, 3-3 district) pulled within 14-12 late in the match only to have Lincoln (16-10, 5-2) close on an 11-4 run to win 25-16.
Garrard rebounded in the second set and led most of the way but had to survive a scare before taking the set 27-25. The Lady Golden Lions had Lincoln down 24-20 when the Lady Patriots won sideout then rolled off four straight points off the service of Jasmine Whited to edge ahead 25-24. But Garrard won sideout to even the score at 25-all then Lincoln hit the ball out and Neek Hocker scored at the net to seal the set win for the Lady Lions.
Garrard jumped out to an early lead in set three, leading by as much as 12-6. The margin was 14-10 before Lincoln earned sideout and Savanna Smith stepped to the service line. She proceeded to serve up six points to earn the Lady Patriots their first lead of the game, 16-14. Lincoln never trailed again, moving on for a 25-21 win to go up 2-1.
While volleyball is not considered a contact sport, the physicality of the match temporarily sidelined a couple players.
“That third set almost got us. So many injuries,” said Torres. “I already had my setter out and my backup setter was already on the floor. So our lineup was all wonky. But they played through it. I told them to play tough and fill in the empty spots – and they did.”
The two teams clawed at each other for much of the fourth set and found themselves in a 13-13 deadlock. Brooke Atkins helped set the Lady Lions on course for the set win by serving up seven straight points to put her team up 20-13. They held on for a 25-17 win to force a fifth set.
The Lady Lions surged in front by six points in the deciding set, but the Lady Patriots fought right back to make it 13-8, then Peyton Griffin stepped up to serve out the set and match win by a score of 15-13.
Torres said she didn’t deliver a drawn out pep talk before Lincoln took the floor for the deciding set, deciding to keep it simple.
“I just said we’ve got to push 15. Play together, play strong, play tough. Just keep your heads because it’s going to be high intensity. Just stay calm,” she said.
And the Lincoln mentor said she wasn’t surprised that her team delivered the win.
“They’ve been doing a really nice job of fighting back when it’s game point and they’re so far from the finish. They’ve been doing a real good job of that,” said Torres. “They are doing so well. I’m so proud of them. They work so hard. They even work hard off the floor. When they go on vacation, they ask, ‘What drills do I do while I’m on the beach?’ They are just very passionate.”
Savanna Smith had 10 kills, three aces and four blocks for Lincoln, Jasmine Whited had five aces and 11 assists, Taryn Johnson had seven kills and five digs, Peyton Griffin had three aces and four kills, Jessie Wilson had four kills and four digs, Hannah Jacobs had three aces and Haley Bowen had four digs.