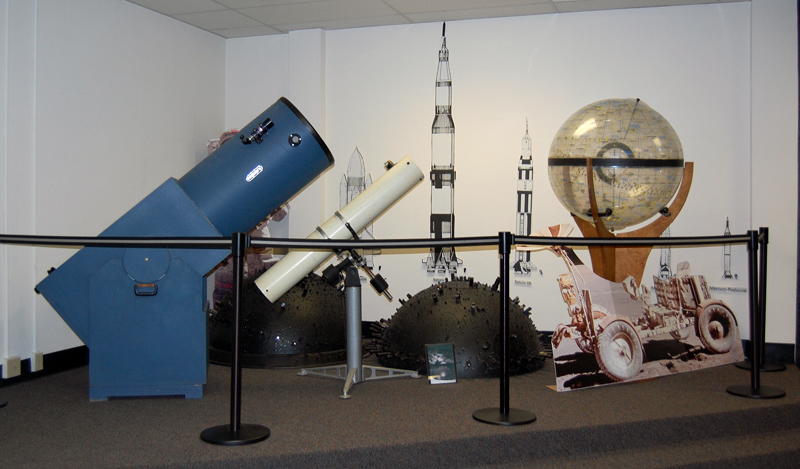 For those who love the night sky, the Arnim D. Hummel Planetarium offers a chance to be surrounded by stars while it’s still daylight outside.
The Hummel Planetarium opened in November 1988 and is located on Eastern Kentucky University’s campus in Richmond. The planetarium features a three-story building with a dome theater that can seat 194 people. Videos are shown in the dome theater with the use of six projectors that show images on the dome walls.
As visitors walk into the building they can peruse through the planetarium gift shop where items such as a Solar System Model Making Kit or space puzzles can be purchased. Tickets for shows are also purchased at the gift shop desk.
Before the video starts, visitors walk downstairs to the first floor to enter the theater room. I went to the 4 p.m. showing of “Awesome Light Episode 3: Chasing Celestial Mysteries.” The video discussed a telescope used by the University of Hawaii that observes supernovae, Britain’s UKIRT (United Kingdom Infrared Telescope) to discover objects in the Milky Way that can be seen by the human eye and a look at asteroids with NASA’s Infrared Telescope. The show lasted a little under 30 minutes.
After each show, the planetarium workers host a star talk where they show and discuss what the night sky will look like that night. The constellations and planets that can be seen and their location are pointed out and discussed in detail.
With the start of the fall season, the summer constellations can still be seen but are in a different position they were in at the beginning of the summer, according to planetarium worker Aida Bermudez. The summer constellations can now be found more to the west. Sagittarius, Cygnus and Lyra were among 88 constellations that can be seen in the night sky.
Since I had not been to the planetarium since elementary school, it was a neat experience and I learned a lot of interesting things. A cool fact I learned that stuck out to me was about the summer triangle. The summer triangle is an asterism created by the stars Altair, Deneb and Vega. An asterism is a collection of stars that may not by identified as a constellation, such as the big dipper. These three stars are the brightest stars found in the constellations Aquila, Cygnus, and Lyra.
These stars form an imaginary triangle that was used by people to determine what time of year it was and the season. If the triangle was to the south, that meant it was close to the fall season or that fall had just started.
The best part of the experience was feeling like I was there in the movie or in the sky. Unlike a normal movie screen, the dome surrounds a good portion of the room. Images you see are on all sides except for behind you. It made for a surreal experience.
However, if you get motion sick fairly easy, you may want to take that into consideration before entering into the theater. Bermudez suggested closing your eyes if someone was feeling motion sick.
Overall for a little venture, visiting the planetarium was a pleasant experience. For a cheap date night idea or a quick outing for your family, taking a trip to the Hummel Planetarium is informational and fun.

Road Trip Facts:
• Show times and days can be found at the Hummel Planetarium website at http://planetarium.eku.edu/. The movies are listed and even suggest what age group is best suited to view it.
• Tickets for adults are $6; for EKU students, seniors 62 or older and military, tickets are $5; children 3 years old or younger can get in free.
• The planetarium can do reservations for groups such as schools, churches or clubs. For a group of 10 or more the price is $4.50 a person.