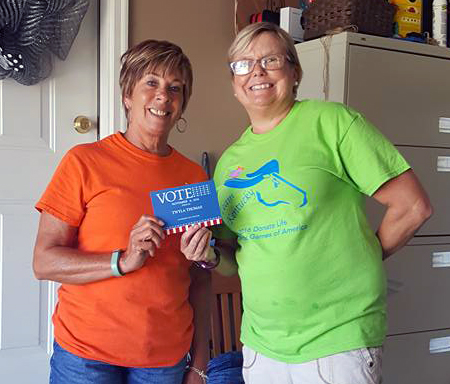 STANFORD – It was about 10 years ago when Twyla Thomas moved to Stanford and now she’s throwing her hat in the race for a seat on the city council.
Thomas, 50, is a native of Indiana but she said it’s her love of Stanford that made her want to run for city council.
“I love Stanford,” she said. “I’ve been thinking about it for years. Once I talked myself into it I got really excited.”
It wasn’t until this year that Thomas said she was able to balance her professional and personal life in a way that allowed her to run for public office.
As far as her professional life, Thomas serves as a pretrial officer in the court system and in her personal life she serves as a mother, grandmother and former foster parent.
Thomas said she has enjoyed seeing Stanford grow, with new businesses coming into town and she wants to help continue that growth.
“There are good businesses in our community,” she said. “You’re bringing people in and giving jobs.”
And visiting those local stores and talking to local people is something she loves to do, Thomas said.
“I love talking to people and listening to people,” she said. “And I like helping people.”
Thomas said change is a good thing, and she wants to be a part of the change Stanford undergoes in the future.
“Everybody told me ‘write-ins don’t win’ but I I can try it,” Thomas said. “Change is good. Growth is awesome, if it’s managed correctly. Stanford is growing and I want to be a part of it.”
Before Thomas entered her name, the Stanford City Council was facing no opposition in the Nov. 8 election. Incumbent city council members include Ronnie Deatherage, Peggy Hester, Naren James, Sara Givens, Scottie Ernst and John Sallee.
As of Tuesday this week, no other write-in candidates had filed to run in any of the offices on the ballot this year.