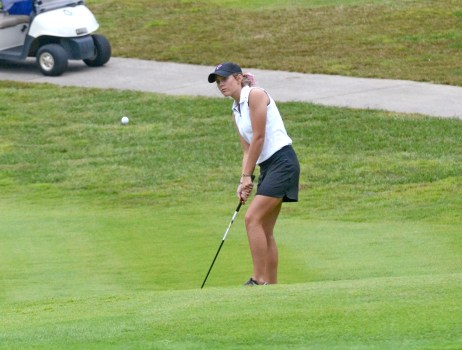 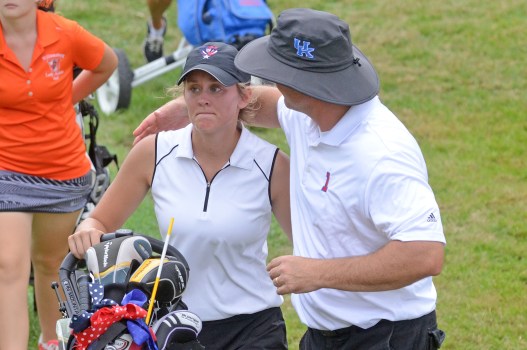 LADY PATRIOT senior Kaycie Bandura chokes back tears as her dad and coach, Kevin Bandura, comes over to give her hug after she putted out the final hole in her high school golf career Monday in the Girls’ Region 9 Golf Tournament at General Burnside Island State Park. Bandura, Lincoln’s No. 1 golfer, fired an 18-hole score of 82 to lead the Lady Patriots to a fifth-place finish. 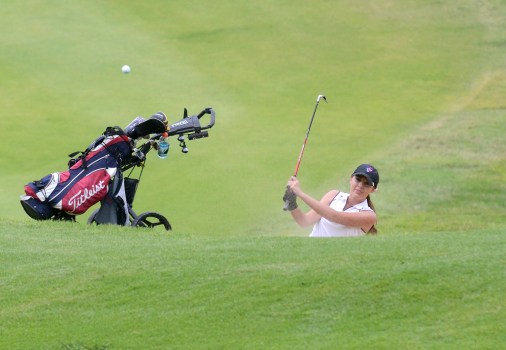 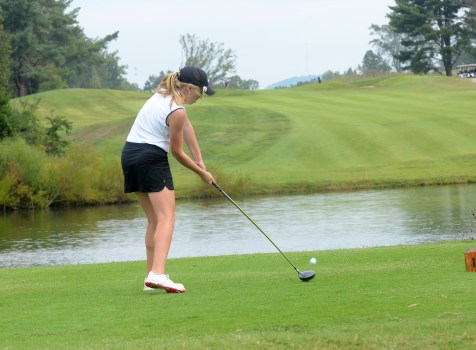 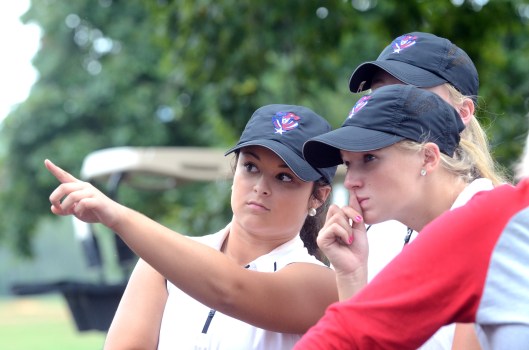 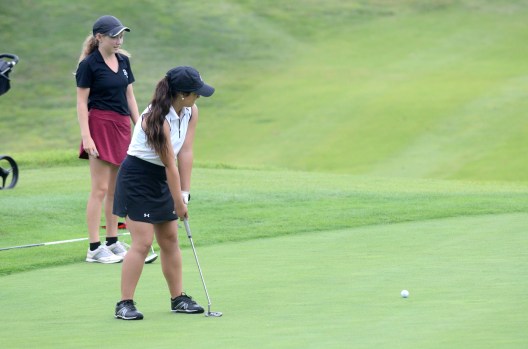 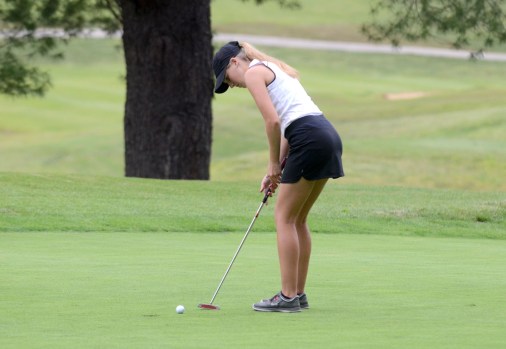 BURNSIDE — The rain held off for the Girls’ Region 9 Golf Tournament at General Burnside Island State Park Monday, but there was still plenty of waterworks as four Lincoln County seniors saw their high school golf careers come to a close.
Kaycie Bandura, the No. 1 Lady Patriot player and the last to come in during the 18-hole tournament, fought back the tears as her coach and dad, Kevin Bandura, came over to hug her after she putted out at No. 18 with teary-eyed teammates – seniors Mariah Bourne, Maggie Peck and Taylor-Grace Mingo, and sophomore Grace Muse – and Lady Pat golf parents looking on.
“Couldn’t ask anything more from the four seniors in terms of working hard and being good kids. We’ve had zero drama on this golf team since they’ve been in the sixth grade,” Bandura said choking back tears. “We had a little parent meeting beforehand …. We talked about that. Nothing you can fix today. We just said, ‘Go and enjoy your kids!’”
And they got to enjoy a great finish for the Lady Patriot golf team, which finished fifth out of the 17 schools participating.
Kaycie Bandura,who had the low score in most of her high school matches this season, led the Lady Patriots with the team’s low round of 82 (41-41), but it would not be enough to earn Bandura a trip to state as she missed the cut by two strokes.
“80 is the cutoff and she shot an 82, but I’m so proud of her,” her dad said. “I’m really, really proud of her. She played her best round at region that she’s ever had. I can’t say enough about the round that she had.”
The top four individual scores turned in (not on the state-qualifying winning and runner-up teams) and advancing to next week’s state tournament were 74, 77, 79 and 80.
Bailey Messer of Barbourville advanced with the round of 74, her teammate, and sister, Whitney Messer, moved on with a 77, Morgan Owen Lewis of Williamsburg carded a 79 and Kamryn Richardson of Russell County had the 80.
There were even lower scores on the state-qualifying teams. Bailey Hubbard fired the day’s low round of 70 to earn medalist honors but it wasn’t enough to help her Clay County team pull out the regional win.
Jackson County, last year’s runner-up, claimed the regional team title this go round with a 330 to Clay County’s 352. Kennedey Murray led Jackson County to victory with a 78.
Lincoln earned fifth overall in the team standings with a score of 389.
Mariah Bourne capped off her high school golf career with her personal best tourney score, shooting an 86 (44-42).
“Mariah had her best round ever in an 18-hole tournament, which is tough to do at regional,” said Bandura. “I thought the course played really tough today, but she played well.”
Maggie Peck carded a 110 (55-55) in her final high school tournament and Taylor-Grace Mingo closed with a 111 (58-53) to give the Lady Pats a 389. Grace Muse, the only non-senior on course for Lincoln Monday, finished with a 112 (59-53).
“(Kaycie’s, Mariah’s) two scores were really good and overall as a team we finished fifth out of the 17 schools that are here. Very pleased with how we played. Great weather. It was a great day all around,” Bandura said.
And that’s exactly how he says he likes to see a season end.
“You want to finish on an up-tick and I think that’s what we’ve done as the season’s gone on,” he said. “Early in the season, we weren’t getting close to breaking 400 and we shoot 389 today. Improvement by everybody for sure is what you want to see. It’s a fast season and a lot of time, when things maybe don’t go your way, it’s hard to correct. It was nice to see Kaycie and Mariah have good rounds and the other girls have good rounds. A good finish, a good day, a good tournament.”
After Bandura, Bourne, Peck and Mingo all completed the tournament, they put a little pressure on Muse, passing on to her the title of No. 1 Lady Pat.
“Grace has got great potential,” said Bandura. “She saw today what it’s going to take to come here and shoot a low number. And I think she’s going to dedicate herself to doing that. She’s had some good role models as far as being good and paying it forward. That goes back to Jackie Pence (former coach) and all the girls that have paved the way for these girls.”