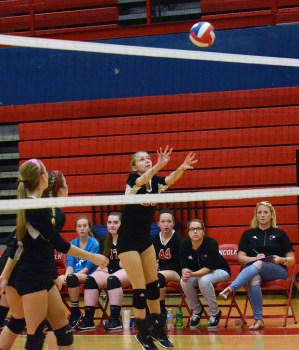 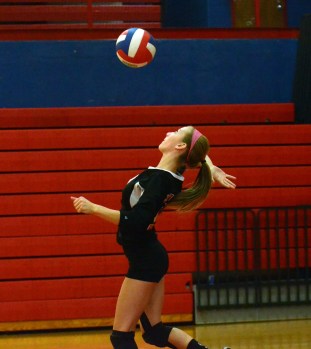 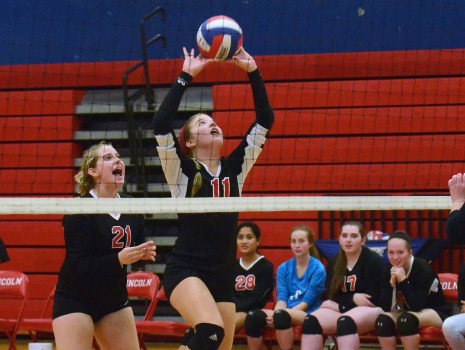 LINCOLN’S Taryn Johnson keeps the ball alive as her teammates look on in game 3 of the Lady Patriots’ 3-0 win over Burgin.

STANFORD — The Lincoln County Lady Patriots improved to 12-10 with a decisive 3-0 12th Region victory over visiting Burgin Tuesday.
It took less than an hour for the Lady Patriots to put away the Lady Bulldogs as they rolled 25-6, 25-8, 25-15.
“We definitely took a big lead early on in the match and we never let it go,” Lincoln coach Samantha Torres said. “We started off strong and it stayed that way.”
The Lady Bulldogs (2-10) eased ahead 2-1 in game one of the match, but they couldn’t keep on the same footing with the Lady Patriots as Haley Bowen and Jessie Wilson stepped up to put the game away off their serves.
Lincoln was up 9-5 when Bowen took her first serve of the night. The Lady Pats scored five points off Bowen’s service game to extend their lead to 14-5 then, after a Casey serving error, Wilson took over to serve out the game for the 25-6 win.
And Lincoln’s service game stayed on point at the start of game two of the match, with the Lady Patriots exploding out to an 8-0 lead off the service of Jasmine Whited. The lead quickly grew to double-digits. Peyton Griffin helped cushion the margin late by serving up five straight points as Lincoln rolled 25-8.
“If you can’t serve, you can’t play,” Torres said. “They really showed their serving skills off tonight. Several of the girls spent a lot of time working on their serve, making it as powerful and as consistent as they can. And it really paid off tonight.”
Lincoln racked up 32 aces against Burgin in the match. Whited led the team stats with nine aces, Taryn Johnson and Wilson both had seven aces, Griffin got five aces and Bowen had four aces.
Burgin challenged Lincoln to a closer battle in game three and held the early lead. The Lady Bulldogs were within 16-14 before Lincoln regained sideout then proceeded to put the match away. Lincoln scored seven straight points off Bowen’s serve to take the third game 25-15.
Whited finished with 13 assists, three kills and three digs. Savannah Smith had six kills and Wilson had four kills.