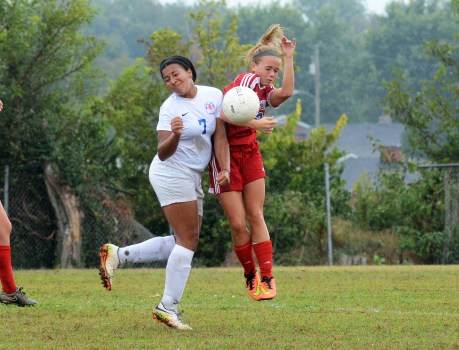 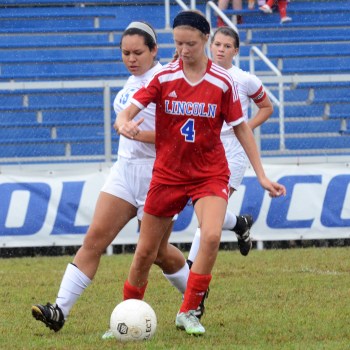 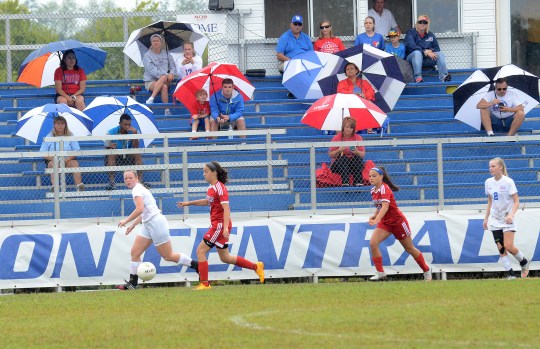 RICHMOND — For 80 minutes Saturday, the Lincoln County girls’ soccer team found out what it was like to beat and bang with a very physical Madison Central team.
The Lady Patriots found out during that time what six of the Lady Indians’ nine previous opponents did – that they had a controlling and aggressive offense. Madison Central controlled the offensive tempo for much of the game and peppered Lincoln goalie Lydia Rice with shots all game as the team shut out the visiting Lady Patriots 6-0.
Lincoln coach Leanne Kirkpatrick said the shutout, Central’s sixth, came as a complete surprise.
“We started out excited. I had a really good feeling coming into today,” she said. “I said, ‘I thought the score was going to be 5-2 (Lincoln),’ but it was 5-0 against us, which isn’t the way I saw it happening.”
But then the game didn’t go as expected from the beginning, with Central (7-3-1) playing a physically aggressive game from the opening kickoff.
“It was a very physical game. We looked at them in warmup and, just from their stature, we knew that they were going to be physical. We didn’t expect quite the roughness that we got,” Kirkpatrick said. “We focused too much on what they were doing and what the refs weren’t doing and that really cost us in the end. Yeah, they were tough.”
The physicality of the game resulted in the loss of two Lady Patriots, with Cassidy Goetz going out with a concussion and Raelyn Amon sustaining an injury to her left knee.
Central’s dominating offense allowed the team to do all the scoring it needed for the win early in the action. Emma Reister scored just over seven minutes into the game to give the Lady Indians a 1-0 lead. Then, Olivia Swafford followed just 30 seconds later with the first of her two goals.
The Lady Indians took a 3-0 lead into the half, with Swafford tallying off a breakaway with 2:24 left in the period.
Lincoln (3-4-1) got very little opportunity to score in the first half, playing on the defensive end for most of the action.
“Everybody was playing defensive,” said Kirkpatrick. “We had forwards back. We had our mids all the way back. And we can’t play like that and expect to win games.”
The Lady Indians would add three more goals in the second half to secure the shutout win, with Annie Harden opening the second period with a score off a penalty kick just over two minutes in.
Megan Harrison and Madison Goodman each added a goal in the second half, with Harrison scoring with 15:09 left in the game and Goodman hitting with 2:09 to go.
While Central keeper Kasi Schneid didn’t allow any Lincoln shots by her in the game, the Lady Patriots improved their play in the second half and moved to a more offensive game.
“At the half, I really tried to focus because we were frustrated with the way they were playing and the way the refs were calling it,” Kirkpatrick said. “So I told them we just have to focus on what we’re going to do and we’ve got to funnel all of that negativity, all of our frustration. We need to funnel it into making us better instead of it bringing us down. And I think they really did pretty well with that the second half, which is a great thing for us mentally. Just the physicality really got to us today.”
Lincoln got back in the “win” column Monday night by picking up an 8-3 road win over Frankfort.
Emma Kaiser led Lincoln’s scoring with three goals, Taylor Bird added two goals and Jenna King, Chandler Otto and Cheyenne Releford each had one goal. Kaiser also had three assists in the win and Alie House had two.
Ellen Williams scored all three of Frankfort’s goals. Madison Close had the assist on two goals and Hannah Jackson had one assist.
Dallis Brown was in goal for Lincoln in the game and Emily Leamon was Frankfort’s keeper.