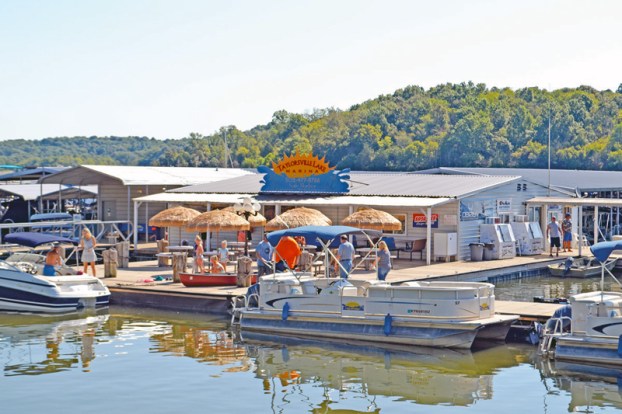 Photos by Joshua Huff The main boat ramp for the casual crowd sits in Settlers Trace at the Taylorsville Lake Marina, where you "relax, unwind and enjoy life."

Photos by Joshua Huff
Taylorsville Lake State Park is the perfect setting for a variety of outdoor water activities.

Are you suffering from a lack of burnt shoulders, a lack of windswept hair and the lack of a large body of water that’s ripe for good fishing and powerboat riding?
Then heck, travel on over to Taylorsville Lake State Park, which is conveniantly located between Louisville and Lexington. Taylorsville Lake just so happens to be a 3,050-acre artificial lake located in Spencer County, as well as in portions of Anderson and Nelson counties.
With its close proximity between the two urban meccas of Kentucky, it’s perfect for people unwilling to travel to the distant Lake Cumberland in southern Kentucky or the far-off Gulf of Mexico.
With its narrow channels and numerous tentacles, the 18-mile long lake is perfect for a day of jet skiing, fishing or lounging on your pontoon boat, catching some sun and riding the wake with your tube.
The artificial lake was constructed by the United States Army Corps of Engineers in 1974. The Engineers flooded the “area” in 1983 at a cost of $103 million. With a dam located on the Salt River, it is said that an estimated $30.5 million in potential flood damages was prevented since the dam became operational.
Since its creation, the lake has been a haven for the recreational crowd. Two boat ramps dot the lake: Settlers Trace and Possum Ridge. The main boat ramp for the casual crowd sits in Settlers Trace at the Taylorsville Lake Marina, where you “relax, unwind and enjoy life.”
The Marina includes over 300 boat slips and offers numerous daily rentals that span from swim pontoon boats ($149 a day and seats up to eight passengers) to deluxe pontoon boats with a water slide ($249 a day and seats up to 10 passengers).
Taylorsville Lake also offers fishermen the opportunity to catch up to eight types of fish: the largemouth bass (must be 15 inches or more), smallmouth bass (must be 15 inches or over), white crappie (much be nine inches or over), black crappie (must be nine inches or over), white bass, hybrid striped bass, blue catfish (limit 15 per angler) and channel catfish (limit 15 per angler).
Be aware though – the popularity of the lake has increased the number of boats in the area, which has increased the difficulty of actually catching the fish; however, just hop on over to the Lake Marina and you’ll be amazed to see a number of bass swimming near the slips; a result of people feeding the fish.
In all, Taylorsville Lake is a wonderful getaway located in rural Kentucky. With its convenient location, numerous opportunities and pleasant atmosphere, the lake is a pleasant surprise for those unaware of what to do in Kentucky besides basketball and the Kentucky Derby.

Road trip Facts
• The Taylorsville Lake Marina is located at 1240 Settlers Trace Rd, Taylorsville, KY 40071.
• The best spots to catch fish are found here: http://www.taylorsvillelakemarina.com/fishing-spots/.
• The lake is murky year around.
• There is a lot of standing timber in the lake, some of which rest just under the waterline.

A Salute to First Responders

By Garry McNabb, CEO, Cash Express, LLC On some anniversaries we celebrate. On others we reflect. The 15th anniversary of... read more