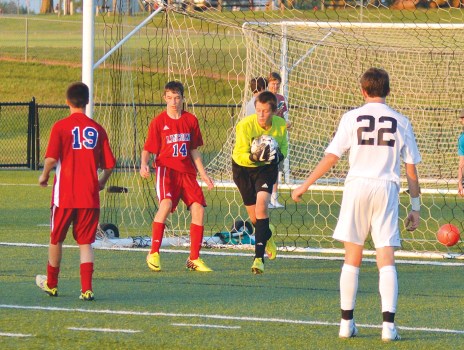 Jeremy Schneider/jeremy.schneider@amnews.com Lincoln County goalkeeper Austin Price brings in a shot during the first half of Thursday's game at Boyle County. 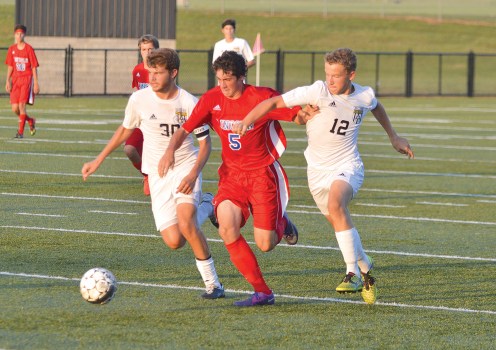 DANVILLE — With a starting lineup featuring four freshmen, it didn’t take Lincoln County long to get stung by Boyle County in Thursday’s 45th District matchup at Rebel Stadium.
Riley Coconaugher scored the first of his four goals 39 seconds into the match, and Caleb Jackson added a tally two minutes later to stake the Rebels to a two-goal lead en route to a 5-1 win.
The two early goals were too much for the soccer Patriots to overcome.
“It kind of set the tone for us in the first half,” Lincoln coach Lewis Cummins said. “It put us on our heels, and we couldn’t get off our heels. Just a couple of mistakes we made early; if we hadn’t made those mistakes early, who knows.”
Cocanougher entered Thursday’s district game with Lincoln County as one of the top-10 goal scorers in the state. It was his fifth multiple-goal game of the season and raised his season total to 18 (2.0 goals per game).
“He’s a very good goal scorer, he’s a natural goal scorer,” Boyle coach Cris McMann said. “He does things in front of the net where you think, oh, well we lost that, then it’s on his foot again and then in the back of the net. There’s just some guys that are like that.”
On each of his goals, Cocanougher used deft footwork and superior speed to get behind the defense and put soccer Patriot goalkeeper Austin Price out of position. His first goal came 39 seconds into the match and the second put the Rebels up 3-0 with 6 minutes, 26 seconds left until halftime.
The senior capped his night with two goals within a minute in the waning moments of the second half.
“He does get coached on certain things, but some guys just sniff out the goal,” McMann said. “You can’t coach that, it’s just natural.”
With the 2-0 lead, McMann felt the Rebels were sleepwalking through the rest of the contest. Jacob Baird put Lincoln on the board 8-1/2 minutes into the second half, cutting the Boyle lead to 3-1 and giving the soccer Pats some juice in their tanks.
“We were playing fast, one- and two-touch soccer, the exact kind of pattern play soccer we’ve been working on, then they scored those two quick goals and all of the sudden they slowed down,” McMann said. “It’s like, oh, this is kind of easy, and they just stopped. They start four freshmen and they scored on us; that’s not good.”
Lincoln fell to 3-4-2 overall and 0-1 in the district with the loss. However, Cummins was pleased with how his squad responded after shaking off the sting of Boyle’s early two-goal edge.
“They played with a lot of heart,” Cummins said. “They kept fighting, never gave up. We got that goal then never could get that next one to close it up.”
The Rebels improved to 2-0 in the 45th District and 5-3-1 overall.
The soccer Pats play at Marion County today at 7:30.