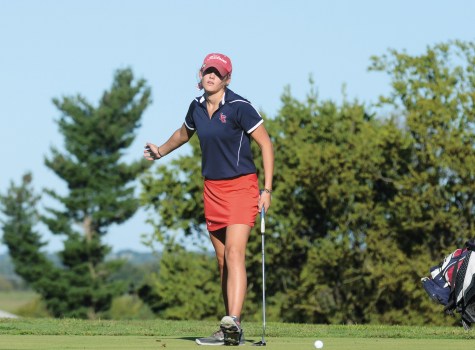 LADY PAT SENIOR Kaycie Bandura reacts after missing her putt on the No. 14 green at the Dix River Golf Course Monday. She had a 42 in the match win. Bandura was one of four seniors on course in the final home match. The other seniors were Mariah Bourne, Taylor-Grace Mingo and Maggie Peck. Photo by Nancy Leedy 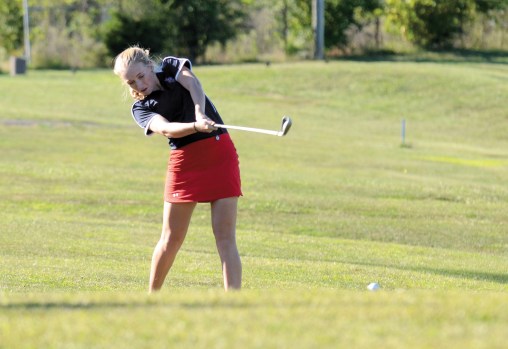 The Lincoln County High School girls golf team wrapped up its home schedule in fine fashion, closing the home stand with a win over Pulaski County and Somerset Monday afternoon.
Kaycie Bandura led Lincoln to victory with a 42 on the Dix River Golf Course as the Lady Patriots won 198-214 over Pulaski. The team won by default over Somerset with not enough Lady Jumpers on course for a team score.
Monday’s match was the finale of four Lady Patriots’ high school golf careers on their home course, with seniors Bandura, Mariah Bourne, Taylor-Grace Mingo and Maggie Peck all playing their final match at Dix River.
And all four seniors figured in Lincoln’s scoring. Bourne finished in the 40s with Bandura with a round of 46, Mingo followed with a 53 and Peck rounded out the scoring with a 57.
Grace Muse also finished with a 57 in the match for Lincoln.
Middle school golfer Kennedy Stamper had a strong round, carding a 44.
The Lady Patriots were also at home Thursday, playing host to Richmond Model, but a lack of players resulted in no team scoring.
Bandura once again led Lincoln on the Dix River links, firing a 38. Peck had a nine-hole score of 51 and Muse shot a 54. In the middle school match, Stamper had a 52.
The Lincoln girls followed their home finale win with a road win at Burnside State Park Tuesday, shooting a 203 to beat Casey County (205) and Southwestern (219).
Bandura topped Lincoln’s scoring with a 47, Bourne had a 48, Mingo and Muse both followed with a 54 and Peck had a 60.