Casey dominant in 3-0 win over Lincoln 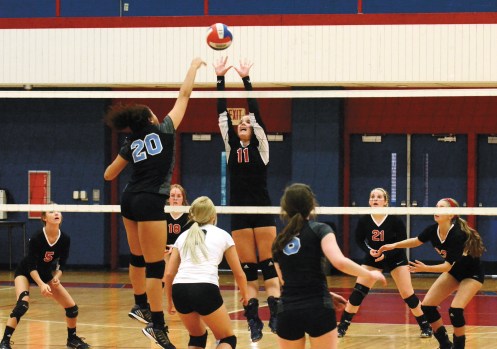 LINCOLN'S Savanna Smith (11) goes up to block this return by Casey County's Brianna Gosser (20) Monday at LCHS. The Lady Rebels of Casey blanked the Lady Patriots. Photo by Nancy Leedy 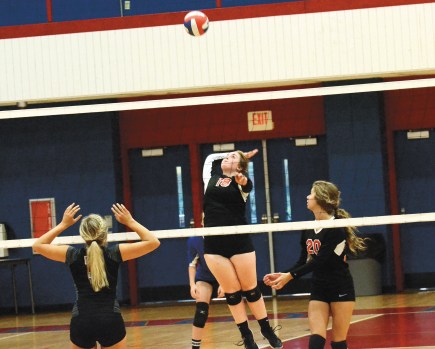 PEYTON GRIFFIN of Lincoln County gets ready for a return shot in volleyball action at LCHS Monday against Casey County. The visiting Lady Rebels won 3-0 over the Lady Patriots.

STANFORD — The Casey County volleyball team took care of business Monday night, defeating host Lincoln County 25-9, 25-19, 25-17 in just over 70 minutes at J.C. Eddleman Gymnasium.
Casey (8-6) raced out to a 13-4 advantage in the first set and continued to roll from there. While Lincoln (7-6) put up a tougher challenge in the second set, Casey maintained control of the match to earn the 3-0 12th Region win.
Lady Patriot coach Samantha Torres said the Lady Rebels’ fast start had her team back on its heels.
“They are a really good team. And on top of that, they are really scrappy and that’s really hard to contend with because you can never score. You get use to these short rallies, but with them it’s nothing but long rallies because no one will let the ball drop and it wears on you,” she said. “We just couldn’t seem to get things to work for us. We played really well, like as far as we fought and we were trying to do our best, but it just didn’t seem to be falling into place, so they took a really big lead in that first set.”
Casey County coach Angie McQueary said exploding out to a big lead early is not uncommon for her team, but maintaining that momentum has been a problem.
“Normally, we come out fast in the first game and we hold back in the second game. Tonight, they played well the whole match,” she said.
Casey’s strong movement on the floor served the team well, especially the first set. The Lady Rebels used their quick play at the net to build the early 13-4 lead then closed with a 12-5 run to take set one.
There was no explosive start for Casey in set two. Lincoln stayed on the Lady Rebels’ heels early in the second set and the set was deadlocked at 13-13 after four Ashlyn Jarman serves. But Casey got the sideout back to edge ahead 14-13, then proceeded to outscore Lincoln 11-6 to win 25-19 and go up 2-0.
Casey never trailed in the third set. The Lady Rebels pulled ahead 11-4 early and led by as many as 11 points before posting a 25-17 win to take the match.
“They talked and moved well tonight, and that’s what helped,” McQueary said of Casey. “And we had minimal service errors. We just played well.”
Torres said having to play from behind didn’t help her team.
“We kind of dug a little bit of a hole and kept having to fight back,” she said. “They had a lot of momentum and trying to take that momentum back was kind of hard. No matter what we did, we just couldn’t seem to get things to work for us.”
Savanna Smith had two blocks, three kills and two digs for Lincoln, Taryn Johnson had five digs and two aces, Jessie Wilson had two aces, Ashlyn Jarman had three digs and Jasmine Whited had three assists.
Brianna Gosser had four kills for Casey and Lacey Brown and Brookley Davis each had three kills. Davis also had four serves and two aces. Tanner Crawford had six serves and one ace.
While disappointed in the loss, Torres said she was not disappointed in her team’s play.
“Our girls didn’t seem to get down at all tonight,” she said. “Usually, we get down a couple points and sort of fall apart. We didn’t do that tonight. We stayed up. We had good spirits, a lot of good energy. So that’s a step forward.”