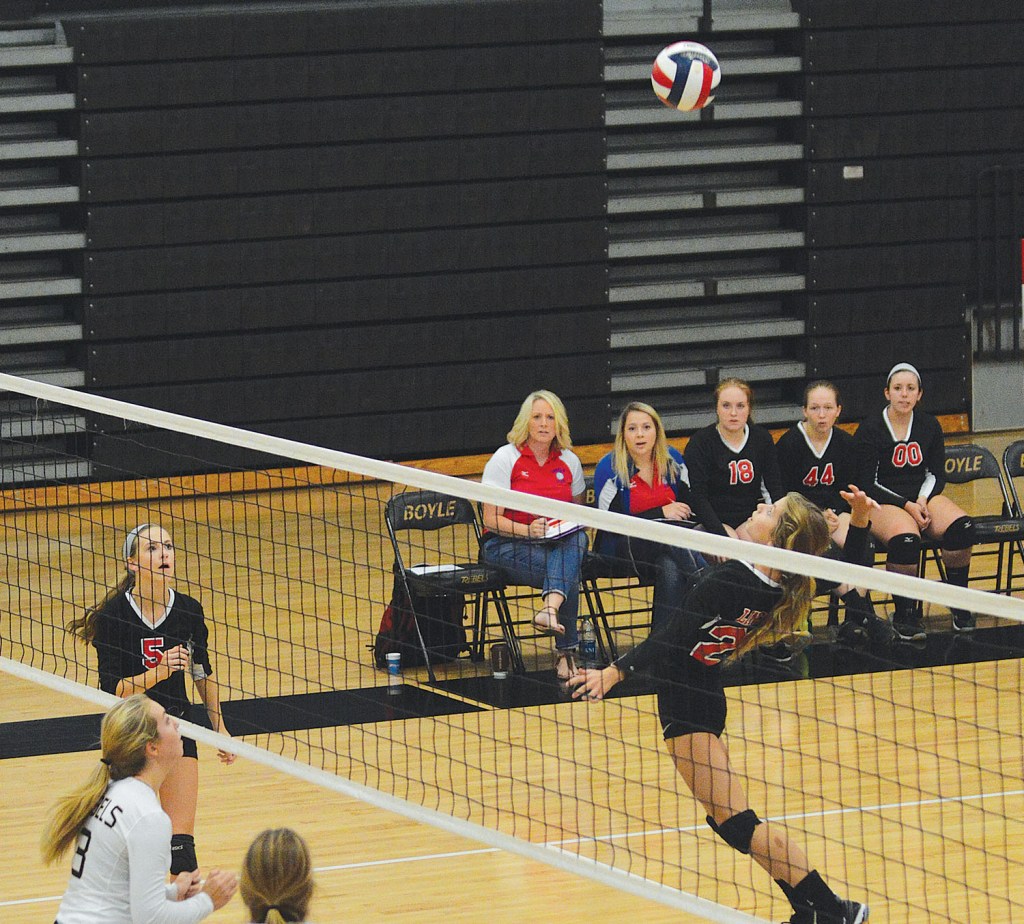 LINCOLN COUNTY'S Bianca Long goes up for a kill during the first set of Thursday's district match at Boyle County. The Lady Rebels won 3-2.

DANVILLE — Momentum can swing wildly back and forth throughout a volleyball match, and Thursday’s 45th District match between Lincoln County and Boyle County was a perfect example.
With no lead safe no matter how large, it was inevitable that the match would go the distance — so it did and then some. And it wouldn’t go in Lincoln’s favor. The host Lady Rebels rallied from a one-set deficit, winning the final two sets to top the Lady Patriots 3-2 (22-25, 25-22, 24-26, 25-18, 17-15).
“Especially when you have two good teams that are rallying hard for each point and fighting until the end,” Boyle coach Andrea Craig said of the momentum swings. “When you’ve got balls going over in rallies six or seven times, when you get out of system and get killed and you come away without the point, it changes your head game. That’s what volleyball is all about — it’s a point-to-point head game.”
The two rivals met Saturday in the Boyle County Invitational, with the Lady Rebels rebounding from a lost second set to win 2-1 (25-11, 23-25, 15-13), so both coaches were well aware this match could easily turn into a marathon.
“It helped a little bit on our part because we knew what we needed to work on coming into it,” Lincoln coach Samantha Torres said. “We were aware of where we messed last time, tighten up and do much better this time.”
Craig said Saturday’s win went a long way to giving her team the confidence it needed in Thursday’s match.
“If we hadn’t had that head game coming out of Saturday’s match, this could have been a whole lot different,” Craig said.
At least early on in Thursday’s first set, though, there was little indication the teams were in for a long night. The Lady Rebels jumped out to a 9-4 lead, and even after the Lady Patriots rallied to tie the set at 11-11, Boyle went on a 6-2 run for a 17-13 lead.
However, three straight service points from Taryn Johnson got the Lady Pats within 17-16, and Jessie Wilson put Lincoln up 24-21 with another three service points on the way to the set win.
The Lady Rebels again opened up a large lead in the second set, 10-3, but of course it wasn’t safe — Lincoln battled back to knot the score at 14-14. The Lady Pats took an 18-16 lead, but Boyle’s Brittney Kincaid served seven straight points to push the Lady Rebels ahead 23-18 before holding on for the win.
Yet again in the third set, the LadyRebels got off to a quick start only to see the Lady Patriots steadily claw their way back into the set. A 5-1 Boyle lead turned into a 16-8 advantage until Lincoln went on a 9-0 run behind. Two self-inflicted wounds on the Lady Rebels — an illegal hit and a ball hit out of bounds — squashed their rally and gave Lincoln a 2-1 lead.
“A lot of the times you’ll see me out here doing this,” Craig said while taping her head with her index finger. “I’m telling them, ‘Keep your head in it. As long as you keep your head in it, you’re going to rise about whatever the adversity is.”
“This team is bonding well enough and having the mental game together better than we ever did last year. If they hadn’t had that tonight, there’s no way we would have come out on top.”
Going off script in the fourth set, neither team held more than a one-point lead early on until Kincaid served for five points, including two aces, to push Boyle ahead 13-8.
And it was back to form in the fifth as Boyle built a 10-4 lead only to have Lincoln rally for a 12-12 tie. It stayed nip-and-tuck for the next three points, but Boyle’s Lexi Gourley and Sierra Dean scored the final two points for the set and match win.
“You have to play matches like this to show yourself what you’re capable of,” Craig said. “These girls get out there and practice against each other or they play some lollipop team that isn’t playing the systems we’re playing, so when you get out there against a team like Lincoln, you’re able to play that fun volleyball that’s fun to watch.”
Dean and Mya Van Steelandt paced Boyle (10-2, 2-0 45th District) with 20 kills apiece; Dean added 15 digs while Van Steelandt had 29 digs and two aces. Kincaid had 18 assists, 17 digs and four kills, Gourley added 16 assists, eight kills, four aces and four digs, and Madison Turney had 20 digs, 10 kills and two aces.
Smith led Lincoln (6-5, 1-1) with 10 kills, six digs and three blocks. Wilson added seven kills, Haley Bowen had 12 digs and Jasmine Whited had 18 assists.
“Rival game, both teams are looking good this year,” Torres said. “We came out to fight, we definitely did. We’ll get them next time.”
Next time will be a Sept. 27 rematch in Stanford.