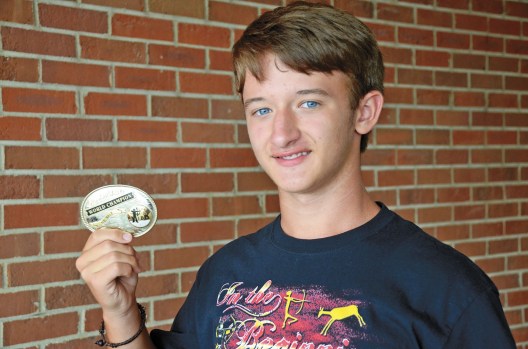 A roadside marker recognizing Connor Patterson’s 2014 national archery championship already sits at the Lincoln County line – it may soon have some company.
Roby Mullins, a former teammate of Patterson, hit the mark in the 2016 NASP/IBO World Outdoor 3D Challenge at Seven Springs Mountain Resort in Pennsylvania, earning world class recognition as the top high school archer.
By the time the Lincoln County archer had fired his final arrow in the Aug. 12 and 13 shoot, he was second to none in his division.
“It feels great. There really are no words to describe it,” Mullins said of his World title. “It’s like, ‘Oh my goodness. I’m world champion now! What’s next?’”
In the sport of 3D archery, the goal is to shoot at various animal-shaped foam targets with scoring rings on them. These are close to life-sized animals and archers could see anything from antelope, deer, sheep, snakes, beaver, elk, cougar and much more. The ability to guess how far away the target is and knowing where to shoot to achieve the highest possible score is probably the number one skill in 3D archery.
In this competition, each archer shoots 30 arrows, 15 from 10 meters and 15 from 15 meters, with a maximum score of 300.
Mullins, who finished third in last year’s Worlds with a 294 and 24 10s, one-upped himself in the 2016 competition by shooting a 295 with 25 10s, the most 10s hit in the tournament.
“My goal for every tournament is to go in there and leave with first place or a good score,” said Mullins. “And I did.”
It didn’t take Mullins long after his turn on the target range to realize that he might be the high school World 3D champion.
“I got lucky because my flight was the last flight of the day so I could figure it out pretty quickly, because they posted scores online within a couple hours,” he said. “I was pretty happy. It was like, ‘Oh my goodness, I’m No. 1!’ My score was 295 and the guy below me had a 294.”
Even after seeing his score, Mullins wasn’t quite ready to celebrate.
“I was pretty happy, but I’m like, ‘Something’s going to happen and I’m not going to get it and I’ll end up in third place,’” Mullins said. “I just didn’t really believe it myself until I got up there on the podium the next day. That’s when I actually let myself get excited.”
The 3D Challenge drew hundreds of the elite athletes in the sport to Seven Springs Mountain Resort for a chance to draw back on their bows and make the best series of archery shots.
And Mullins knew just the caliber of competition he was facing going into the challenge. Not because of his previous Worlds experience, but through a little scouting.
“We kind of watched it to see if it would be worth going,” he said. “We watched who was entering and I was like third-ish there for a while. All of us up there at the top were separated by maybe eight points from No. 1 to No. 10 so we were like, ‘If I go up there and shoot good and they have a little bit of an off day, I can come in and I could win the 3-Star, too.’ So we thought why not.”
After learning of his placement in the final standings, Mullins let his mom and sister, Kelly and Rylee Mullins, who had to miss the Worlds trip because of school, know of the results. While the homefront’s excitement was off the charts, it couldn’t match the pride felt in Pennsylvania by his father and coach, Ricky Mullins.
“I think he was a lot more excited than me,” Roby Mullins said. “Where he is also my dad, he goes out and says, ‘Oh my goodness, my son did great.’ Or he’ll say, ‘Oh, he did alright.’ He gets a little excited. He was very proud of me. I think he was on cloud nine for a while.”
When Mullins returned home from his Worlds trip, he brought with him an unusual souvenir. As a reward for winning the NASP/IBO World Outdoor 3D Challenge, Mullins received neither a trophy nor a plaque – he was given a belt buckle.
“I was really surprised with the belt buckle,” he said. “I didn’t expect it. They give buckles in rodeo, but I didn’t know they did in archery.”
Is Mullins, who is a junior at Lincoln County High School, content with having achieved the title of World champion?
“No,” he said. “This year’s upcoming archery season will probably start back about November. I’m wanting to get state champion, national champion and world champion under my belt this year. Get them all and just say, ‘Yep! I’ve done it.’”
Daniel Sapp, a junior at Hartland High School, Maryland, was the 3D runner-up. He scored a 294 with 24 10s. Amy Hurd, a junior at Whitko High School, Indiana, placed third with 291, 24 10s, Larry Eyman, a sophomore at Crooksville High School, Ohio, was fourth with a 291, 23 10s and Caleb Stillians, a junior at Sarcoxie High School, Missouri, rounded out the top five with a 291 with 22 10s.