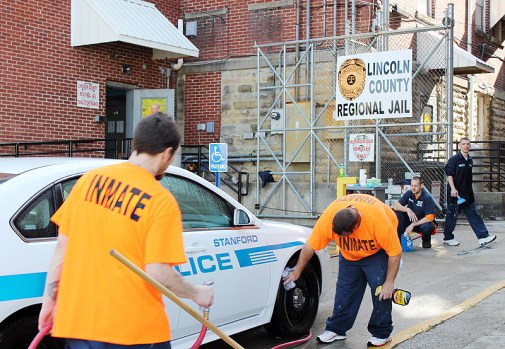 STANFORD – Lincoln County Jailer Rob Wilson doesn’t believe there are bad people, only bad choices – a belief that has led him to create new ways of giving local inmates a second chance at being productive, law-abiding citizens in the community.
That’s the inspiration behind Wilson’s plan to allow certain non-violent inmates the opportunity to explore the role of an emergency responder through a new pilot program created by the Stanford Fire Department.
“It’s a way for those young guys that may just need that little lift and opportunity to get involved in the community,” Wilson said.
By exposing inmates to fire instructors and other emergency responders in the county, Wilson hopes to change the mentality of “us versus them” and raise the self-esteem of inmates who would like to better their lives.
“A lot of these young guys have never had any guidance. They’ve never had any structure or discipline,” Wilson said. “A lot of them think that firefighting, policing and EMS is totally unattainable to them and lash out at them because ‘if I can’t be them, I hate them.’”
Partnering with the Stanford Fire Department, Wilson said he hopes to send five to 10 inmates to participate in the first 16-hour training program created by Assistant Fire Chief Brian Jenkins.
“I’d like to get some of these young guys involved. Once we do the program, some of these boys may come down here and ask if they’re looking for any volunteers,” Wilson said. “My step-son had some issues and he got involved with one of the local county fire departments and it just absolutely changed him. It gave him a structure and a purpose.”
That’s what Wilson is hoping to give to the inmates able to participate.
“Hopefully it’s something to give them a little pride in,” he said. “Stuff like this should’ve been going on years ago.”
Fire Chief Scott Maples said through the program inmates will earn certification in CPR and First Aid response and learn about the basic history of the fire service among other topics.
Maples said if one inmate is helped through the program then he will consider it a success.
“Sometimes bad things happen to good people,” he said.
Wilson agreed.
“I don’t believe in bad people, I believe in bad choices,” he said. “Young kids get out here and do stupid stuff and end up paying for it for the rest of their life. “This is our attempt to try and turn a couple around.”
While the inmates won’t be fighting any fires, they’ll be able to assist the fire department in many situations.
“In the winter, if there are trees down or roads blocked, they can come get inmates up and come clear trees out of the roads, come down here and wash fire trucks or mow the yard,” Wilson said. “Basically, give the inmates the rookie treatment like a new guy at the fire department.”
Since the fire department is connected to the Stanford Police Department, Wilson said the group of inmates will be around local law enforcement in a different setting than they’ve experienced in the past.
“When they’re down here training, they’ll be exposed to the police department. Once you put a name to a uniform or a badge, it takes that interaction to a whole different level. When you see them on the street it’s not like ‘there’s that cop,’” he said.
The materials for the training will be paid for with funds from the jail’s canteen fund, he added.
“I’m hoping that if we work it out and it goes good it can be a pilot program for some other areas in the state,” Wilson said.
Maples said several of the fire department’s instructors have already gotten the necessary training in order to supervise inmates and Wilson said only local county inmates will be chosen to participate in the training.
The program is something that everyone, from police officers to firefighters, have seemed to support from the very beginning.
“Pretty much everybody was excited about it,” Wilson said. “I can remember several years back when I was on the police department, you would never see the jailer sitting here talking to the fire department about doing something like this.”