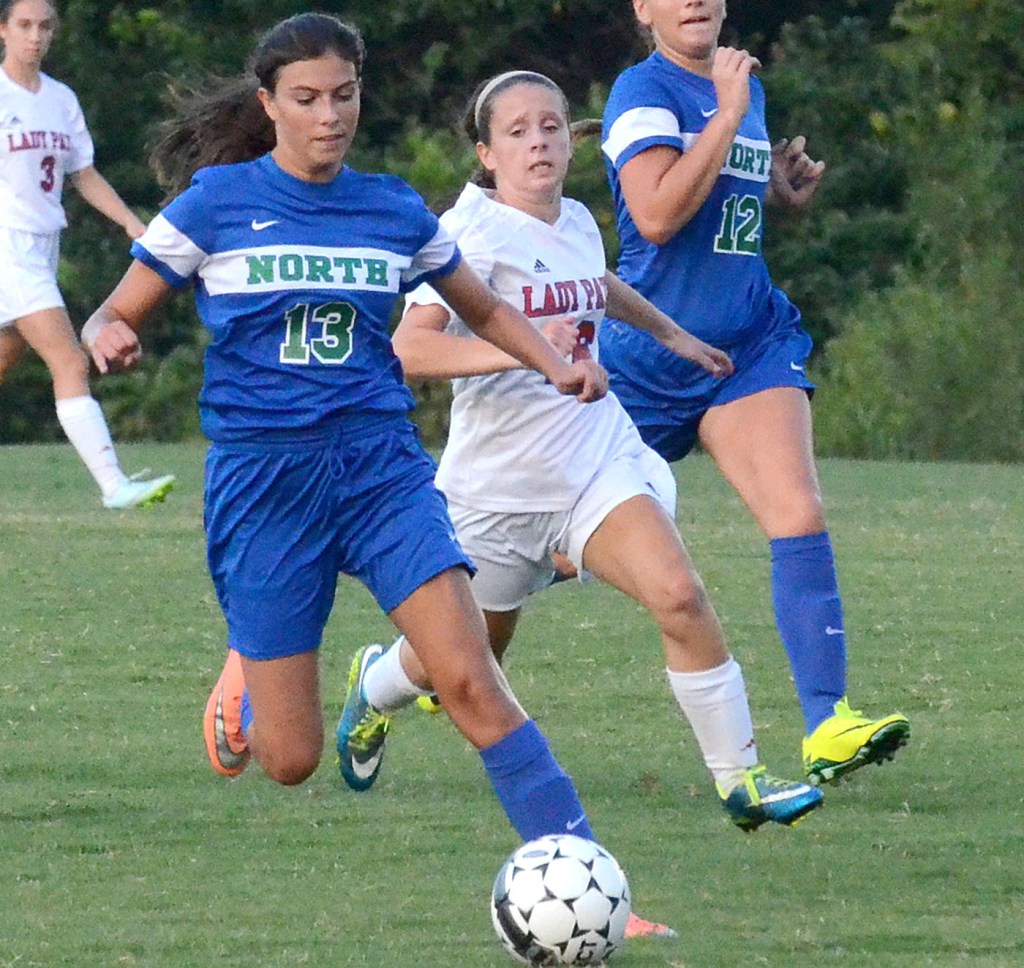 LINCOLN'S Taylor Bird is hot on the heels of North Laurel's Hannah Brock, trying to regain possession for the Lady Patriots.

STANFORD — The Lincoln County girls soccer team rallied from a 2-0 first-half deficit Monday night against North Laurel, but the Lady Patriots could not pull out the win.
After a one-hour weather delay and a slow start, the homestanding Lady Patriots fought back from the early deficit, scoring one goal before the half then tacking on two more goals in the second half in a 3-3 draw.
“We definitely weren’t playing our game that first half,” Lincoln coach Leanne Kirkpatrick said. “It showed in the score and it showed in the mood we had at halftime. They were all down and I never want them down because, as soon as they admit defeat, that’s when we’re done. No matter what the score says.”
But the Lady Patriots weren’t done.
Jenna King got the Lady Patriots on the scoreboard before the end of the first half, working the ball to the left side of goal then booting the ball in behind North keeper Savannah Lawson with 11:17 left in the half to get Lincoln within 2-1.
However, Lily Messer would score less than three minutes later for the Lady Jaguars, getting the assist from Mia Sparkman as North posted a 3-1 halftime lead.
North would not score again.
Lincoln (2-2) did all the scoring in the second half to force the draw. Raelyn Amon scored her first goal of the season 38 seconds into the second half then, with 26:15 left in the game, Chandler Otto dribbled to the middle of goal on a breakaway to score the equalizer.
“They (Lady Jaguars) were playing kickball early and so we started playing kickball. And that’s not our game. We want to possess it. We want to make smart passes and smart plays. We finally got there in the second half,” Kirkpatrick said. “The second half looked so much better. At halftime they worked on it and the second half we came out and played soccer. That’s what we want every time. If we come out in every game like we did in the second half, teams can’t hang with us.”
Amon’s goal was her first of the season.
“She just took it upon herself,” said Kirkpatrick. “She’s been wanting a goal and I felt like she was going to get it today.”
Jenna Rockwell got North (3-1-1) the 2-0 lead in the first half of the first period. Rockwell lofted the game’s first goal over Lincoln goalkeeper Lydia Rice and into the back of the net just over four minutes into play. The senior midfielder tallied again midway through the half with a punch in from the right side of goal to make it 2-0.
While the one-hour delay due to inclement weather could have factored in Lincoln’s slow start, Kirkpatrick didn’t feel it was key.
“It’s been like this on a lot of games for us. Just a slow start. We’re not ready for it,” she said. “We’ve tried different things to get them into it. We’ve just got to be ready at the first whistle. I think every game we’ve played the other team has come out and scored one on us and then we decide we want to play. And we can’t play like that because, against better teams, it’s 3-4 goals.”
“We can’t be the comeback queens, that’s not working for me,” she said. “It becomes mental at that point because then you have to overcome already being down. Obviously, we came back from it. We’re smart girls and our hearts are in it and we can handle the mental, but it just makes it a whole different ballgame when you have to play from behind.”
The Lady Jaguars had 10 shots on goal while the Lady Patriots finished with 16 shots on goal.