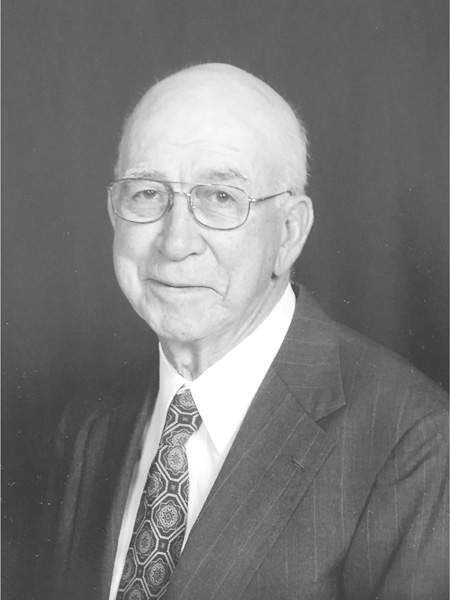 J.L. (James Lish) Hoskins, 92, husband of Evelyn Allen Hoskins and owner of Branch View Angus passed away September 4, 2016 at Baptist Health Lexington.
Born September 27, 1923, in Casey County, he was the son of the late William and Pearl Bell Hoskins. A lifetime farmer in Lincoln and Casey County, J.L. raised tobacco and Angus cattle. In his 70+ years raising Angus cattle he sold them across Kentucky and the surrounding states. He and the daughters participated in local, state and national Angus cattle shows for many years.
J.L. had a busy personal life. He was an active member of the Hustonville Baptist Church serving as Sunday school teacher, chairman of the ushers, and a trustee. He was a founding member of the Central Kentucky Angus Association and later served as director and president. He was a lifetime member of the American Angus Association and served as a delegate representing Kentucky at the Annual Meeting. He was a director of the Kentucky Angus Association and Peoples Bank. He was a member of Lincoln County Farm Bureau, Hustonville Ruritan and a Kentucky Colonel. He was presented with the American Angus Association’s Historic Herd Award, Kentucky Angus Lifetime Achievement Award, Kentucky Angus Performance Breeder of the Year Award, Honorary Commissioner of Agriculture, and Lincoln County Outstanding Farmer. He was a salesman for Bluegrass Fertilizer Company, sold Vigertone Mineral for 35 Years, and was a tobacco solicitor for the Burley Tobacco Warehouse for 40 years.
J.L. was a loving and supportive husband, father and grandfather. Evelyn and he celebrated 70 years of marriage January 19, 2016. Besides Evelyn, he is survived by two daughters, Donna (Donald Stephen) Coffey of Hustonville and Rita (Kinney) Noe of Stanford; grandchildren, James (LuAnn) Coffey of Hustonville, Kindra (Dustin) Witak of Peewee Valley, and Kandis (Kyle) Nicholas of Indianapolis; great-grandchildren, Addison, Bennett and David Coffey, Andrew and Kinnedy Witak, and Kade Nicholas due in November.
Besides his parents, he was preceded in death by three brothers, Estil, Chester, and Elmer Hoskins; and four sisters, Pauline Roy, Bessie Richards, Eula Hankla and Elizabeth Turpin.
Visitation will be tonight (Thursday, Sept. 8) from 5 to 9 p.m. at W.L. Pruitt Funeral Home in Hustonville.
Funeral services are at 11 a.m. Friday, Sept. 9, at Hustonville Baptist Church with Rev. John Penick, Rev. William Julian and Rev. Andrew McGinnis officiating. Burial will follow in Hustonville Cemetery.
Active pallbearers are James S., Addison, and Bennett Coffey, Dustin and Andrew Witak, and Kyle Nicholas. Honorary pallbearers are Elwood and Garland Hoskins, Mike and William Land, Mel and Billy Hankla, Dwight and Kent Richards, Tommy and Danny Smith, Stanley Burris and Tim Dievert.
In lieu of flowers, contributions can be made to the Hustonville Baptist Church or Hustonville Cemetery.