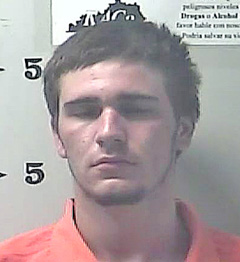 WAYNESBURG – A Lincoln County man was arrested after Lincoln County Sheriff’s Deputies allegedly found marijuana and methamphetamine in his possession during a traffic stop.
Noah Goodpaster, 18, of Waynesburg, faces multiple drug-possession charges.
Sheriff’s Deputy Chase Marcum was patrolling on Fishing Creek Road when he pulled over a pick-up truck for a traffic violation.
After the driver and Goodpaster, a passenger at the time, exited the vehicle, Marcum said Goodpaster began behaving in a nervous manner.
Marcum asked if there was anything illegal inside the truck and Goodpaster admitted there was before reaching into the glove compartment and handing over a bag of marijuana.
“After he gave me the marijuana he was still very nervous at that time. I asked him if there was anything else illegal in the vehicle that I need to know about. He said no, the only thing that was in there was the bag of pot,” Marcum said.
But as Marcum continued his search of the vehicle, he discovered an Altoids tin in the glove compartment with a small baggie of what appeared to be methamphetamine inside it.
“So we continued to search the rest of the vehicle,” Marcum said. “We found another bag of marijuana and also a pipe that had been used to smoke marijuana.”
Marcum said there was about a half-gram of methamphetamine in the baggie that was confiscated.
Goodpaster was arrested and transported to the Lincoln County Regional Jail where he faces charges of first-degree possession of a controlled substance (methamphetamine), possession of marijuana and possession of drug paraphernalia. A $5,000 cash bond has been set.
The driver of the truck, which belonged to Goodpaster, was cited for traffic violations but was not taken into custody.