Tshiebwe may be UK’s soothsayer 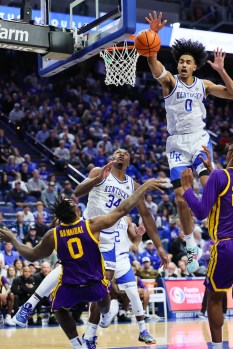 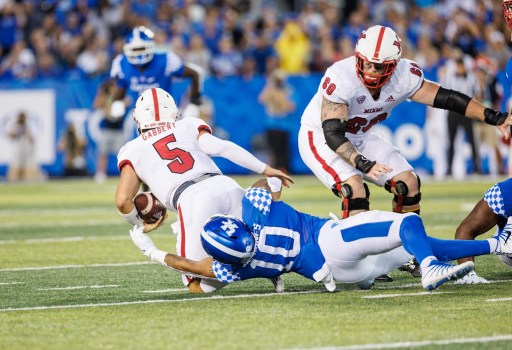 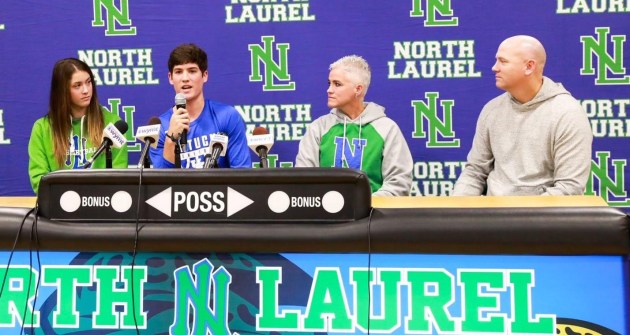 Stacey and Jeff Sheppard met while both were playing basketball at Kentucky and now their son, Reed, is a UK signee. Kentucky Today photo by Les Nicholson Photo

Not every player would have the confidence and/or courage to let a coach know that he might need to ease off the criticism of his players.

Kentucky senior Oscar Tshiebwe is not just any player. He’s not only UK’s leading scorer and rebounder but he was also the unanimous national player of the year last season. Tshiebwe is also guided by his faith and has a contagious personality.

So maybe that’s why when he made a suggestion to Kentucky coach John Calipari it actually hit home.

“I tell Coach, ‘You want to be so hard on them (players), sometimes you really mess up their minds. You are making it worse.’ Coach, he came out and he started motivating them boys.  Players are stepping up because they hear more positive stuff,” Tshiebwe said after UK’s win over Louisville.

No one needed a more loving Calipari than senior Jacob Toppin. He came into the season being touted as one of the nation’s “breakout” players and a huge difference-maker for Kentucky. Calipari predicted he would be a first-round NBA Draft pick.

Instead, he struggled so much that Calipari took him out of the starting lineup and in a loss at Missouri last week he not only did not score but he played a season-low 12 minutes. Rather than keep him on the bench, Calipari put him back in the starting lineup against Louisville and Toppin responded with a career-high 24 points, seven rebounds and two assists in 35 minutes ((he had just 13 points in the previous four games before erupting against Louisville).

“He played like we know he is capable of playing and got out of his head,” Kentucky assistant coach Orlando Antigua said.

Maybe Tshiebwe’s advice helped Toppin, too. He even suggested Toppin might sleep in the gym so he could work out even more if he really wanted to be better. He also urged him to start reading the Bible more.

“I just re-motivated him. I said you are better than what you’re doing,” Tshiebwe said he told Toppin.  “Don’t let that noise affect your mindset. Get off social media, don’t pay any attention to it.

“Social media is just something — I don’t know, it’s not a good time for social media. Take it off of your phone like I already did. Keep your mind locked in and you’re gonna get there. That’s the Jacob everybody knows.”

Toppin, a senior, was remarkably honest after the game about his mental state. Tshiebwe said every time Toppin hears something negative, it impacts him whether it was social media criticism or a coach screaming at him.

“I’ve been in a rough patch that I needed to get out of. I’ve had a lot of support from my teammates and my coaching staff, and it just feels good to be back to my old self,” Toppin said after the game.

Calipari suggested Toppin was one of the Kentucky players “feeling the weight of the world” and it had impacted the way he played. Against Louisville, he was again his energetic self on both ends of the court and also played with more poise and discipline on offense.

He was 3-for-21 from 3-point range in UK’s first 12 games and wisely just took one against a Louisville defense that let him get loose inside the paint most of the game.

Louisville coach Kenny Payne was not surprised that Toppin, who averages 10.8 points and 6.4 rebounds per game, is a “high-level player” who can dominate a game. Payne called him an “elite athlete with the way he moves” on both ends of the court.

“He’s quick, he can handle the ball well enough to get to spots the floor, he can shoot decent enough, he is relentless and on top of his stuff, and he can get offensive rebounds,” Payne said.

Now Toppin has to show he can get over the “rough patch” in games like the ones at Alabama Saturday or Tennessee Jan. 14.

“We’ve done a lot of work and it hasn’t been on the court. Are you fragile or do you keep playing? He kept playing and now he’s going to do it against better teams, you watch,” Calipari said after the Louisville game.

Love is in the air

Kentucky basketball signee Reed Sheppard is having another terrific season for North Laurel averaging 22.8 points and 8.9 rebounds per game.

He’s a double legacy recruit as his father, Jeff Sheppard, was the 1998 Final Four Most Outstanding Player and his mother, Stacey Reed, is still second on UK’s all-time steals list with 309.

Reed’s parents met at UK during her sophomore year and his freshman year. She heard Jeff, a Georgia native, loved to fish and that then UK coach Rick Pitino was not always overly  nice to freshmen.

“I heard Jeff was having a hard time,” Stacey, a Laurel County native, said. “I sent him a note in (basketball) study hall telling him I was from Kentucky and if he would like to go fishing I would be glad to take him.

“He wadded up the note and threw it in the garbage. It was about a year and a half later when he came over to me. I was in the training room with my foot in an ice bucket when he finally said he would like to hang out.”

Their first date was to the Ichthus, a Christian music festival in Wilmore.

“Coach Pitino actually told him that he needed to get rid of that girl,” Stacey laughed and said. “All I had done was offer to take him fishing but that’s how we started dating.”

Senior linebacker Jacquez Jones was hurt much of the season but was not going to miss the Music City Bowl game.

“I could opt out and get ready for the next level. I love Kentucky. The NFL is not guaranteed,” he said before the game. “I want to play my last game and show these young guys when you get to my level you still need to lead by example.”

He also wanted to make sure he had one more chance to play with his younger teammates.

“This team is going to be special next year,” Jones said even though UK lost 21-0 to Iowa in the bowl game. “They signed a great recruiting class. Wherever I am next year, I am going to be tuned in watching the games. This is a special young group and they know they got to take care of business. I am excited to see their future and all they can do.”

“It’s going to be a special unit,” Jones, who is headed to the NFL draft rather than staying at UK another year, said. “I hate to say it but they might be better than our defense but that’s how you want it to be.”

Associate head coach Vince Marrow is just as excited about two of his freshman tight ends.

“I knew Jordan Dingle would be really good,” Marrow said. “The one that surprised me with how good he came in was Josh Kattus. I could have played him sooner but we had some older guys in front of him. But it got to the point where I could not keep Kattus off the field, either. And Jordan just kept making play after play.

“It’s good we have them for three more years. Our future is really bright for the next three years with those guys and some others we are bringing in. But those two guys are both going to be really, really good.”

The UK recruiting coordinator also thinks running backs JuTahn McClain and LaVell Wright are both better than many realize because they played behind Chris Rodriguez.

“I think most people don’t realize JuTahn had over 40 (scholarship) offers. I remember around signing day Ohio State lost a running back and JuTahn was the first guy they called but he was loyal to us,” Marrow said. “He is an all-around back. He can pick up the blitz. He can catch out of the backfield but he’s also a tough runner.

“I think LaVell could be in the same boat as Benny (Snell) and C-Rod. He is a big, tough kid and I am excited about what he can do for us.”

“I have a lot of work to do, but I’m really excited about it because I feel like there’s a great nucleus of young players. There’s a really good set of guys with experience coming back,” Stoops said. “We have some guys right in the middle (of the defense) that have some experience now that are ready to explode and be really big-team players. So I feel like we have a lot of good pieces in place.”

Former Kentucky star Tyrese Maxey has always been very community-minded and one reason his parents were excited for him to play at UK was because of coach John Calipari’s commitment to community service.

Maxey now plays for the Philadelphia 76ers but his service to others has not changed. He was recently named the NBA Cares Community Assist Award winner for November because of his dedication to strengthening families and communities and supporting youth development.

Maxey and the Tyrese Maxey Foundation donated 300 turkey meals to families in need in West Philadelphia during Thanksgiving and found volunteers to help pack the meals for distribution to make sure each family received a turkey, a five-pound bag of potatoes and other traditional Thanksgiving meal items.

Maxey was also part 76ers’ back-to-school efforts at a surprise pep rally at an elementary school where he talked to students about the importance of respecting their teachers, class attendance, and goal setting.   The 300 students  received a new backpack and school supplies while every educator at the school received 76ers swag for their classrooms.

He also had free camps for youth ages 7-12 in Philadelphia, Lexington and his hometown of Garland, TX.

“I’m grateful to God, my community, and the NBA for this honor,” Maxey said in the release from the NBA Cares Community Assist Award. “I feel really connected to families in Philly and Dallas because they work so hard day in and day out and I understand that hustle – to be in a position to give back, I’m truly blessed.”

The NBA donated $10,000 to the Tyrese Maxey Foundation for his selection as the award winner.

NIL continues to create a buzz in major college athletics and coaches understand even they do not know exactly what is going to happen.

“We’re in a good position. I think our administration has worked really hard with us to get ourselves in a position where we can be successful, I think, as I’ve mentioned before, so the foundation, the roots are in place,” Kentucky football coach Mark Stoops said.

“I think any coach would say you need — I mean, it’s just the way it is, you need money in the collective. There’s no denying that. Everybody in our organization wants to support that collective, help our players.”

The transfer portal has become a showcase for NIL chances just like high school recruiting has. Coaches have no choice but to look for ways to find as much money as possible for their players to obtain through NIL.

“Again, we didn’t create those rules. It’s part of a much broader system that is in place right now that we all have to adapt and be able to adjust and be successful in that area,” Stoops said. “So we need the money.”