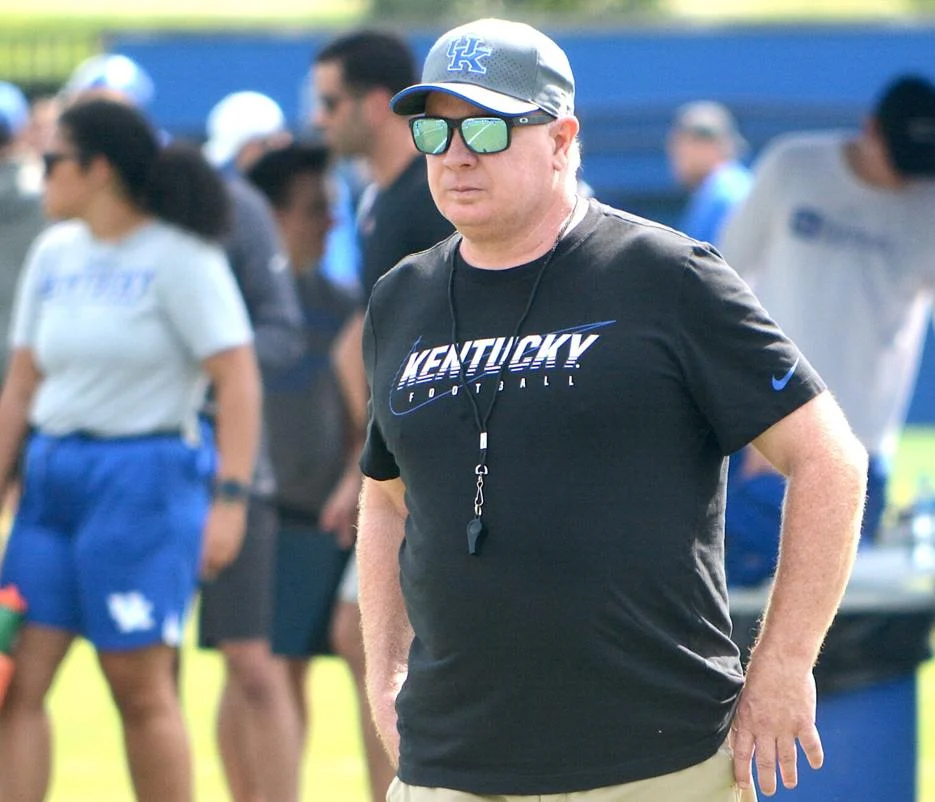 Kentucky football coach Mark Stoops and the Wildcats will take on Iowa in the Music City Bowl set for noon Saturday in Nashville. Kentucky Today photo by Keith Taylor

Kentucky has arrived in Nashville in hopes of finishing strong this college football season.

The Wildcats (7-5) began preparing for Saturday’s postseason rematch against Iowa in the Music City Bowl on Tuesday without their major offensive players, including quarterback Will Levis, leading rusher Chris Rodriguez, land defensive back Carrington Valentine who are opting out with the NFL Draft within sight. Linebacker DeAndre Square will also miss the game with an injury.

“This is an opportunity for so many guys to kind of just prove, once and for all, last time for this season, (to) make a last impression, prove to themselves and to the coaches and to everyone else in the world what they’re capable of and what this team is capable of,” Levis said earlier this month. “I know that all of these dudes who are playing are pumped to show that and are really excited to play a really good Iowa team.”

The team’s depth chart, released ahead of a seventh consecutive postseason appearance under coach Mark Stoops, didn’t reveal the starting quarterback. Kaiya Sheron, Deuce Hogan, or Destin Wade were listed atop the list of potential starters and all three will take snaps, coaches said.

“We’ll see where it goes,” Stoops said. “… The quarterbacks have each had their moments. Each of them have done some good. There are some areas where they need to improve. But it’s fun. It’s fun watching them, seeing them get quality reps, knowing that we’re preparing to play a game.”

Stoops understood why Levis and Rodriguez opted not to play in the finale.

“They both have done so much for us,” Stoops said. “Both of these guys have been playing through injury. They both were not 100 percent throughout the year. We completely understand and support them. They’re here and want to help any way they can.”

JuTahn McClain and La’vell Wright were listed as the top two running backs.

The Music City Bowl will turn 25 on New Year’s Eve and organizers have put together an anniversary team.

Former Kentucky coach Rich Brooks was named coach of the anniversary team. During his tenure, Brooks guided the Wildcats to three appearances in the Music City Bowl and won two of those games. Kentucky defeated Clemson 28-20 in 2006 followed by a 35-28 victory over Florida State a year later. Brooks and the Wildcats dropped a 21-13 loss to Clemson in Brooks’ finale as coach in 2009.

Kentucky has made five trips to the Music City Bowl and dropped a 24-23 loss to Northwestern five years ago at Nissan Stadium.

“Our bowl game has always prided itself on being a stage for college and pro football’s next generation of stars,” Scott Ramsey, President & CEO of the TransPerfect Music City Bowl said. “Over the past 25 years, we have been grateful to see incredible individual performances. We are thankful for the hundreds of college football fans for recognizing those performances throughout the season.

“As we look ahead to Saturday’s matchup between Iowa and Kentucky, we look forward to seeing the next group of players to make their mark on our game.”