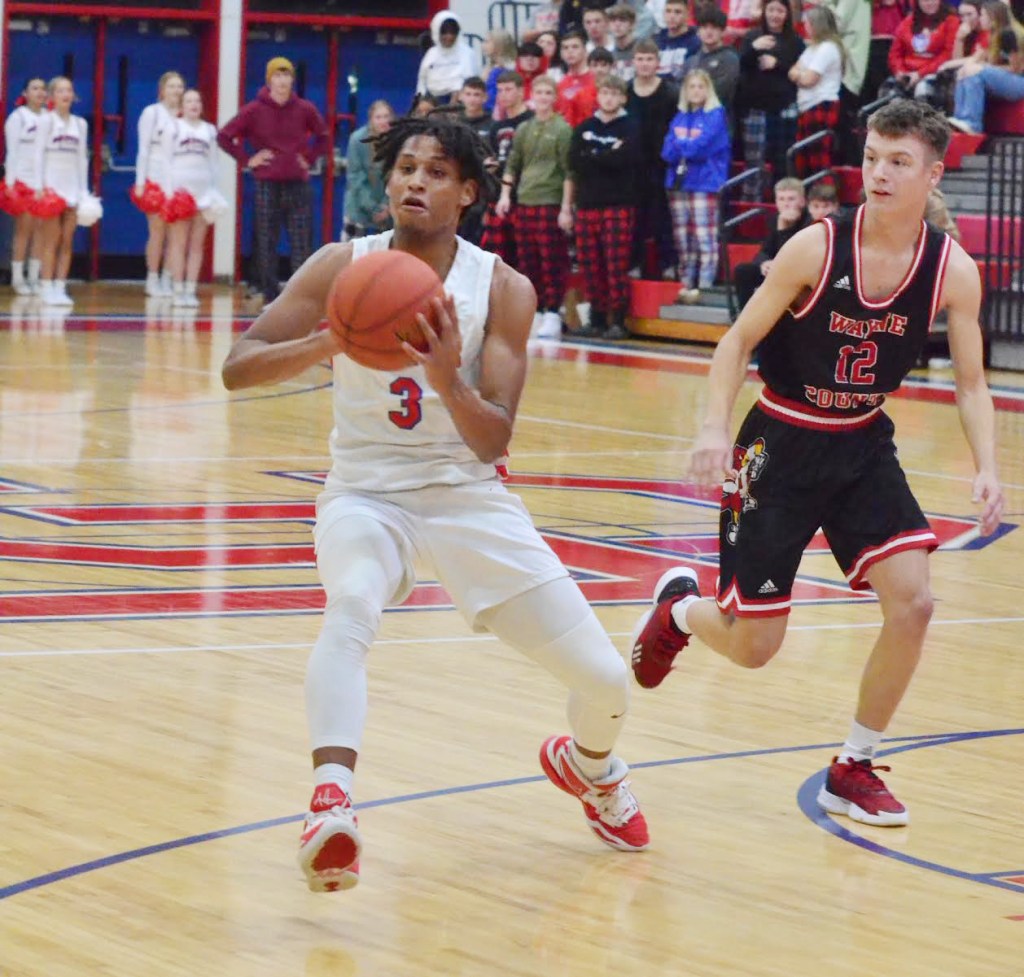 Tramane Alcorn (3) of Lincoln County pulls up to pass the ball as Wayne County’s 12 moves in during the first quarter Tuesday. Photo by Mike Marsee

STANFORD — The champs are ready now.

Maybe not ready to win the 12th Region again, because putting themselves in position to repeat as regional champions will be a season-long pursuit for the Lincoln County boys. But they showed Tuesday night that they’re ready to do the work.

The Patriots weren’t quite ready last week, when they opened the season with a surprising loss. But they made it clear in their home opener that they learned their lesson as they bounced back to throttle Wayne County 58-31 in the Jack Upchurch Classic.

Guard Tramane Alcorn, one of four seniors who helped Lincoln set a school record for victories and reach the semifinals of the Boys Sweet 16 last season, said the Patriots remain hungry for more.

“We want to end our season at Rupp,” Alcorn said.

The Patriots’ road back to Rupp Arena had a rocky start, as a Lafayette team that went 4-24 last season handed them a 74-63 defeat Nov. 29 in Lexington.

“It was an eye-opener,” Lincoln guard Tramane Alcorn said. “Everybody’s coming for us after last year. We’ve got to protect our house, and that’s what we did tonight.”

The difference was defense. Lafayette shot 57 percent from the field against the Patriots; Wayne shot 34 percent.

“When we defend, that’s what happens,” Alcorn said. “We’ve just got to defend and keep our heads in it. If we defend we’ll win; if we don’t defend we’ll get beat.”

Lincoln has long been a defensive-minded team, and it ranked first in the 12th Region and sixth in the state last year with 48.7 points allowed per game.

“That can be there every night,” Lincoln coach Jeff Jackson said. “The ball’s not (always) going to go in the basket; other teams are good defensively as well. But if we guard well and communicate and rebound the basketball and limit people to one shot and contest that shot, it gives us a better opportunity to have success.”

The Patriots had some extra time to work on their defense after the Lafayette loss. They canceled a game against a Missouri power at the Marshall County Hoopfest after Lincoln County schools were closed Thursday and Friday due to illness and several players fell ill.

Practices continued with the players who were healthy, and the team came together Monday for what Jackson said was a very good practice.

Alcorn said the work the Patriots put in between their first two games left them in a better place.

Lincoln held Wayne to four points in the second quarter as it opened a 34-14 halftime lead and to six points in a third quarter that saw its lead grow to 26 points.

The Cardinals went without a field goal for a stretch of almost 10 minutes in the second and third periods, and they finished with their lowest point total since the Patriots defeated them 65-30 in the early days of last season.

Alcorn, ranked as the top player in the region by The Cats’ Pause Kentucky Basketball Yearbook, got the Patriots off on the right foot by scoring 11 points in the first quarter.

He and Colton Ralston finished with 16 points each, Jackson Sims scored 11 and Will Bishop had 10.

“Our effort was good, our ball movement was good,” Jackson said. “We’ve got to share the ball and get everybody involved, and I thought we did a good job of that tonight, but I’m really pleased with our defensive effort and our rebounding.”

Bishop, who missed all but seven games last season with an injury, had nine rebounds and Alcorn had eight to help Lincoln outrebounded Wayne 38-25. The Patriots had 15 offensive boards.

Jackson said it was exactly the response he was looking for.

“We’ve got a long way to go and we’ve got a lot of work in front of us, but I thought our effort was really, really good tonight,” he said.

Lincoln improved to 4-0 in the Jack Upchurch Classic, the name given to the annual Lincoln-Wayne game in 2019 to honor the late Jack Upchurch, who played at Wayne and coached at Lincoln and Wayne.

Alcorn and Phillips were named the players of the game.