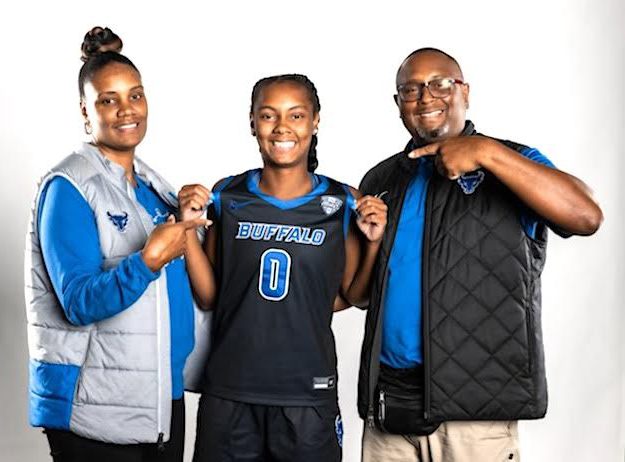 Timberlynn Yeast with her parents on a visit to Buffalo. Photo submitted

Buffalo coach Becky Burke says she has watched Mercer County standout Timberlynn Yeast play for years but “never had a shot” of recruiting her before she got the head job at Buffalo.

“Now we are starting a pipeline in Kentucky with her and Jakayla Thompson (of Manual). They are two of the very best players in Kentucky this year. With our Kentucky ties on the staff and now getting those two in our first recruiting class there’s no reason we cannot get more really good players out of Kentucky.”

The 5-10 Yeast was a second team all-state selection lat year when she averaged 20.9 points and 8.4 rebounds per game. She shot 52 percent from the field.  She is just four rebounds away from 500 for her career and just over 500 points away from being the school’s all-time leading scorer (she already has over 2,000 points.)

She played AAU for the West Virginia Thunder that won the Under Armour Circuit championship. She is also a track standout and multiple time state champion despite spending very little time on track because of her basketball schedule.

“She just ties the laces up and rolls out and wins state championships in track,” Burke , a former University of Louisville standout, said. “That’s just God-given ability. You can’t teach that. But she won’t have to worry about track here. It will be basketball-only.

“She is the total package for the system I run. I love her on the defensive end of the floor. She can guard multiple positions and keep people in front of her. She is the type of  player that wants to guard the other team’s best player every night.

“On the offensive end, she is a strong two-level scorer and if she can get her 3-point shot to be respectable to where she is a three-level scorer, she’s going to be really special. She is so athletic, so smart that she just finds a way to score.”

Burke thought so highly of Yeast that she readily admits one reason she put Wyatt Foust, who had been the director of basketball operations at Murray State, on her staff was his past relationship with Yeast.

“He all but promised we would get her, but her and I have also developed a strong relationship,” Burke said. “She is a very unique young lady in terms of how she likes to be communicated with. She’s not a woman of a ton of words but our conversations are meaningful. I really like spending time with her.”

Burke certainly knows basketball. She helped Louisville make three NCAA Tournament appearances, including the national championship game in 2009, before her graduation in 2012. She led the Cards in scoring her sophomore year and in 3-point field goal percentage her junior year. She made 249 3’s in her career and took part in the State Farm College 3-Point Shoot-Out in 2012 where she finished second.

“I have had very real conversations with her about what her ceiling will be here,” Burke, the coach at USC Upstate the previous two seasons, said. “Sometimes coaches make players believe they are better than they really are. But Timberlynn’s impact on our program will leave a mark well beyond her years.

“I think she can put her name in any category or statistical record she wants. The sky’s the limit for her and I told her that. It’s just not something I tell a recruit. She really is a program changer and impact player.”