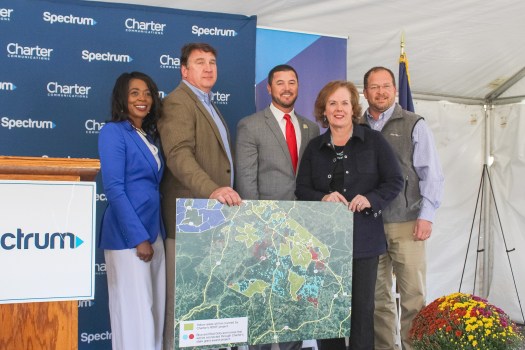 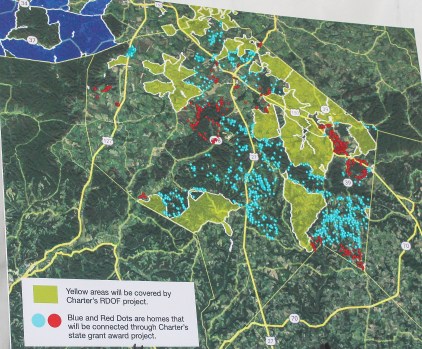 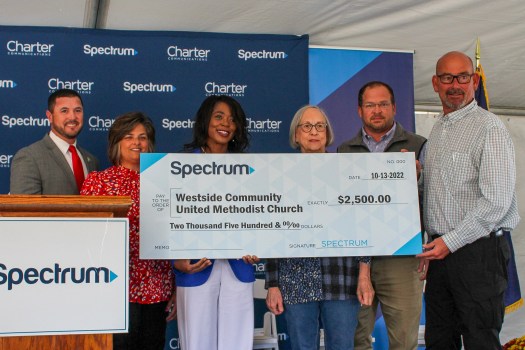 Spectrum representatives and elected officials, including Dalton Miller, right, and Woods Adams (second from right) were on hand as Spectrum presented a $2,500 check to Westside Community United Methodist Church to help build an all-inclusive playground. Photo by Fiona Morgan 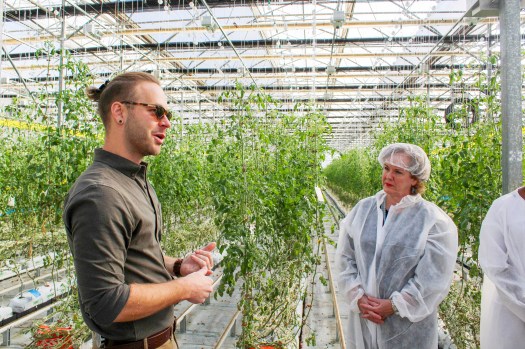 Trevor Terry, communications officer for Kentucky Fresh Harvest, gives a tour of their greenhouse where they’re currently growing grape tomatoes to ship to stores around the state and other states. He talked about the ways they need fast, reliable Internet in their growing operations. Photo by Fiona Morgan 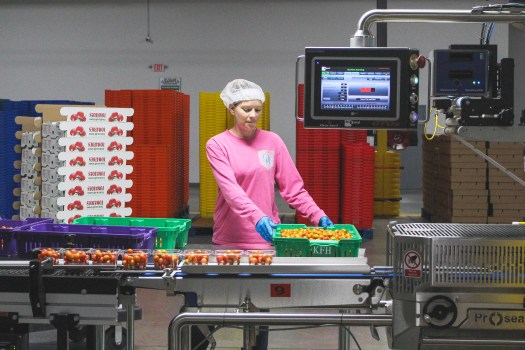 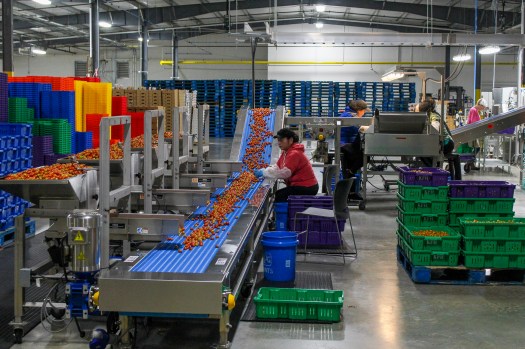 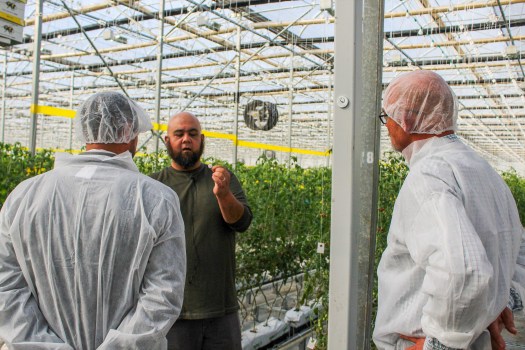 Spectrum has announced a fiber-optic Internet expansion in rural parts of Lincoln County. The project will bring gigabit broadband to homes and businesses in the county that, for years, have dealt with slow Internet or rely on landlines.

Spectrum officials presented a map of the project’s coverage in a press conference last week. The new coverage will be scattered all over the county.

The buildout is part of Spectrum’s approximately $5 billion investment in unserved rural areas around the nation, which includes more than $1 billion won in the Federal Communications Commission’s (FCC) Rural Digital Opportunity Fund auction.

The federal RDOF money will cover about 1,400 homes in Lincoln County in phase 1 of the overall expansion. Areas were identified by the FCC’s assessment and prioritization of the most underserved, rural areas.

Marva Johnson, group vice president of government affairs for Charter Communications, said many rural areas have less than 25 megabits per second of Internet speed. To compare, many suburban areas have at least 300 to 500 mbps. Johnson said the rural expansion will provide speeds up to 1 gigabit per second (1,000 mbps), which will be on par with major cities.

Johnson said Spectrum is in the design phase of construction. They are trying to get all the construction data they need by going around to power lines and homes to take measurements and data. Then they will provide more information on when coverage will be available.

“As soon as we bring this county into that database, which is generally after walkouts, people can look up their address to see if they’re getting covered,” Johnson said.

Meade explained that when the rural broadband fund started about four years ago, they put in $50 million to start out funding for Kentucky. When the federal RDOF money came in, the state knew they needed to put in more money.

Meade said he suggested $100 million, then a few days later went back and said that wasn’t enough. He drafted and presented an amendment that put $250 million into the fund, with an additional $50 million for economic development broadband.

Spectrum is not the only company to receive funds for broadband expansion. Windstream has gotten an expansion project in Hustonville, and AT&T is doing a project on the northern end of the county. 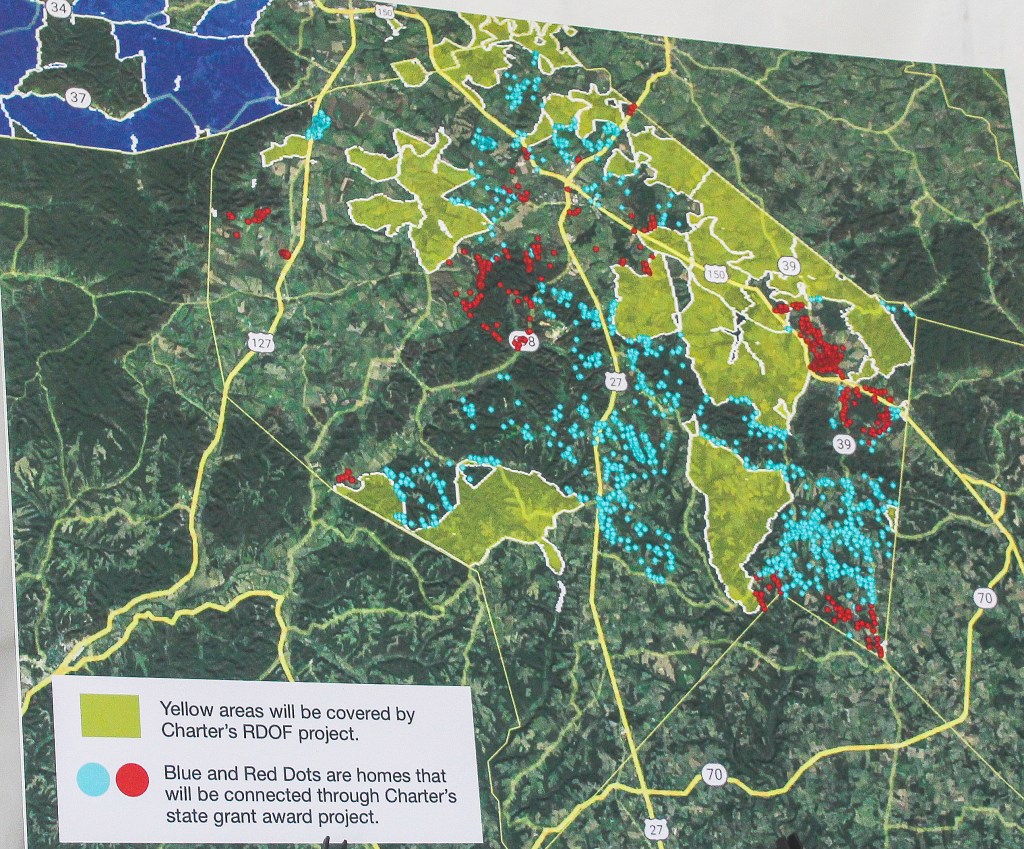 “Just because you’re not on this map doesn’t mean you’re not included; the goal is to get everyone at some point included, and that’s going to have to be partnerships with Charter and others like Charter,” Meade said.

Meade said there will be at least 3,500 homes covered in the next few phases. There is also a separate fund to make sure utility poles can be replaced in a way that allows service providers to accelerate service.

“David Meade has been such a champion for rural broadband in Frankfort, and he has almost single handedly made these extraordinary things happen for rural communities all over Kentucky,” said Ellen Call, senior director of government affairs for Charter Communications.

Several locals and elected officials spoke about how important reliable Internet is for living in today’s world. Andrea Miller from the Lincoln County Chamber of Commerce said she sometimes has trouble with the Internet even in town.

“I have an office downtown that’s graciously provided by the fiscal court, but every time it rains, my Internet goes out, and you might as well go home. You can’t really run a chamber of commerce without Internet access, communication, etc.,” Miller said.

Trevor Terry, chief marketing and communications officer for Kentucky Fresh Harvest, said they need fast Internet for maintaining a growing environment in their greenhouse; on the factory line where vegetables are packaged; and for communication with customers, as they provide food to other states.

“It’s never going to be profitable without fast Internet speed, without connection to our customers,” Terry said. “Our ability to access customers in Milwaukee for instance, is crucial.”

Spectrum presented a check for $2,500 to Westside Community United Methodist Church, which has been building an all inclusive playground.

Meade said there’s not many recreational activities on the west side of the county, and this park will be a good place for families. The money will go to part of the construction on the park, as some of it is already built.

Spectrum offers a suite of products that will be available to the new coverage area. Along with multiple broadband options, services will also include Spectrum TV and Spectrum Mobile.

Spectrum is also a participant in the FCC’s Affordable Connectivity Program, which makes Internet service available at a low, or even at no cost to eligible families in financial need. All Spectrum Internet plans are eligible for ACP credits.

Local residents and business owners can visit spectrumruralexpansion.com to learn more about when their home or business may be able to receive services.