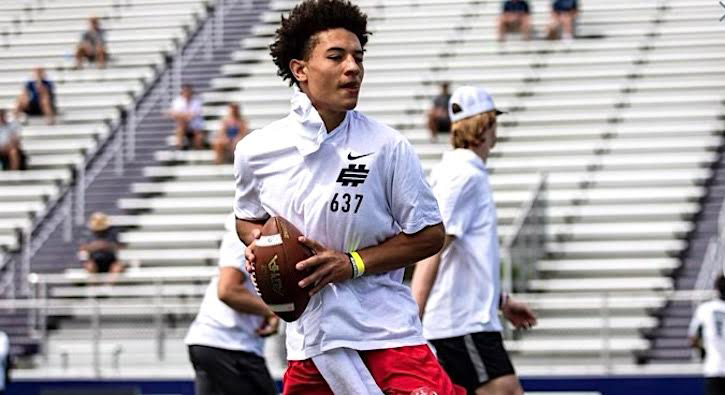 Pookie Jones of Calloway County was not only Kentucky’s Mr. Football in 1989, but he also led Kentucky to the 1983 Peach Bowl and was fourth all-time in total offense at the time he graduated. He later played three years of minor league baseball before spending time in the Canadian Football League.

Now his son, Jacob, a senior quarterback at West Jessamine High School, is having a Mr. Football-worthy season.

“Jacob rushed for more yards in five games than I did in a whole season when I won Mr. Football,” Pookie Jones said. “He’s trying to be what could be the first quarterback (in Kentucky) to run for over 2,000 yards and throw for over 2,000 in the same season.”

It could easily happen. Going into Friday night’s game at Madison Southern, Jacob Jones has rushed 142 times for 1,365 yards and 18 touchdowns in seven games. He has completed 105 of 170 for 1,689 yards and 20 touchdowns with two interceptions. He’s averaging 195 yards rushing per game and 241 yards passing and with three regular-season games and at least one playoff game left, he could easily surpass 2,000 yards in both areas.

“If he is not a top five kid in the state, I have not seen one,” said Woodford County coach Dennis Johnson, another former Mr. Football and UK star who played in the NFL.

“He makes plays with his feet and throws the ball great,” Johnson said. “If he played for (Frederick) Douglass, St. X or Trinity, he would be seen as one of the best kids in the state. What he adds to that team and brings individually is unreal.

“I look at what he is doing, and he’s definitely a top five guy in the state. He’s got the stats, speed and arm talent. He even played defense against us and did a good job.”

Yet the 6-2, 201-pound West Jessamine senior has only two Division I scholarship offers — Kentucky and Eastern Kentucky. He got an early offer from UK but Pookie Jones senses the Wildcats have backed off.

“When I won Mr. Football, I only had a handful of offers but felt I was the best quarterback in the state,” Pookie Jones said. “The best player on the field should win Mr. Football based on the numbers he has on the field.

“I think what happens now is college coaches just don’t get out as much (to see players). If you are a 2023 recruit, they (college coaches) already have got who they want picked. But they are missing out on a pretty good quarterback. Some kids don’t get better until they get a little older.”

Jacob Jones threw for 1,720 yards and 17 scores in 2021 and ran for 682 yards and 16 more touchdowns. He joined the track team to improve his speed and running style and Pookie Jones says his son believes he can get his time down to 4.3 seconds.

Johnson says college coaches sometimes underestimate players because of a team’s record. West Jessamine currently is 3-4 after finishing 5-6 in 2021.

“I have one or two really good players who are not getting recruited like I think they should,” Johnson said. “I think he is a real talent. He is 100 percent a Division I guy. He can command an offense. He had a huge performance against us and I have some pretty good dudes he controlled. He is very elusive and hard to tackle.”

Jacob Jones only played flag football until seventh grade because his father wanted to make sure his body was ready for tackle football.

“He has so much pressure on him but is still new at his position,” Pookie Jones said. “Coaches tell me he’s not the same player he was last year and I know he can still get better.

“I am trying to get (UK recruiting coordinator) Vince (Marrow) to come out and watch him. He’s just different when you see him in person on the field.”

Pookie Jones says one of his son’s favorite players is Baltimore Ravens quarterback Lamar Jackson, who did not have a ton of college offers when he came to Louisville and won the Heisman Trophy.

“I just want him to go to a place where he is wanted and has the best opportunity to succeed,” Pookie Jones said. “Whoever gets him will get a good kid and good quarterback. I know as his dad I am biased, but he really is a special player and better than I ever was.”

Seven true freshmen — Barion Brown, Dane Key, Deone Walker, Alex Afari, Keaten Wade, Josh Kattus and Kiyaunta Goodwin — have already played too many games to be redshirted and have coach Mark Stoops even more excited about their futures than when the season started.

“He’s getting stronger, getting adapted to the speed of the SEC. He’s got that. Very, very talented,” Stoops said. “You see it every day. It’s nice to see the youngsters out there because they seem to be able to play forever, which you love because they’re right back on the field on Monday and Tuesday, and practicing fast, playing fast, and looking good.”

Brown has 17 catches for 288 yards and two scores and is averaging 47.7 yards per kickoff return with one 100-yard touchdown.

While Brown is a starter and already a three-time SEC honoree, defensive coordinator Brad White is just as happy with reserve linebacker Wade.

“Definitely shown improvement. It helps him from a confidence standpoint to get reps,” White said. “He is at his best when he believes what he is doing is right. He is such a great young man.

“He reminds me of a young Josh Paschal in that he always wants to do the right thing. At some point when Josh was settled into the system, I would tell him sometimes it is okay to cut loose and go be a football player. When you are a young player you want to do it right and don’t want to let those other guys around you (down).

“He is so conscientious about trying to do everything right but the more confidence he gains in himself, the more he can just cut loose. I have seen flashes of it and am looking forward to seeing more.”

Goodwin, an offensive tackle, has played the least of the seven freshmen who have played four games or more. He was also the highest rated recruit in the group but Stoops has no problem with his work ethic.

“He’s working his way into shape and I believe will be a very good player. When that is, we don’t need to rush people,” Stoops said. “Look at guys that have been here. They blow up as a fourth-year player or fifth-year player.

“You just never know. Some guys are ready to go early, not many are. It’s a hard game to play, it’s a hard position to play. He will be good in the right time.”

Is Levis too strong?

ESPN NFL draft analyst Todd McShay had an interesting take on Kentucky quarterback Will Levis on the “The Russillo Podcast” recently. He has Levis as one of the nation’s top three quarterbacks and projected top 10 pick in the 2023 draft.

However, McShay worries that Levis is too strong.

“His short accuracy suffers because of his obsession with weight training,” McShay told Ryen Russell. “Find me a quarterback in the NFL who’s a weight room legend that’s a real success.”

McShay said Tim Tebow of Florida was “too pumped up” and Brady Quinn of Notre Dame were perfect examples of quarterbacks who were too strong and not accurate enough.

“When you can rear back and just drive the ball down the field, yeah, there’s accuracy there. But when it comes to touch and finesse, Levis is missing inside the strike zone too much, and taking away from yards after catch, and sometimes just missing outside of the strike zone and it’s leading to incompletions,” McShay said. “That’s a little thing he has to work on.”

ESPN senior draft analyst Mel Kiper Jr. does not seem as concerned. He recently was on the KJM show — hosted by Keyshawn Johnson, Jay Williams and Max Kellerman —and made a case for how Levis could be the No. 1 pick in the 2023 draft (an opinion that UK offensive coordinator Rich Scangarello also has).

“Levis is the guy in an NFL offense at Kentucky, has had some rough moments with the turnovers, I get that. But he’s at Kentucky, the offensive line hasn’t helped him that much, he has to work hard for what he does there, and that’s in the NFL, it doesn’t come easy,” Kiper said.

Kiper feels the way Levis won over teammates so quickly in 2021 after transferring from Penn State and leading UK to a rare 10-win season is an intangible that NFL personnel like.

“It comes easy for pitch and catch quarterbacks, it doesn’t come easy at Kentucky and that’s gonna help Will Levis transition quick into the NFL.  He’s the kind of guy, I would say if I had to bet one, who’s going to be the number one pick in the 2023 NFL Draft right now guys, I would bet on Will Levis from Kentucky,” Kiper said.

Levis is 97 of 141 passing for 1,405 yards and 12 touchdowns with four interceptions in five games after missing last week’s loss to South Carolina with a foot injury. Levis has been sacked 19 times and UK ranks 129th out of 131 FBS teams and last among Power 5 teams in sacks allowed (25) after six games.