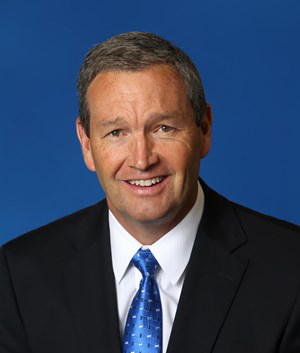 The National Football Foundation & College Hall of Fame announced that UK athletics director Mitch Barnhart will be the recipient of the 2022 NFF John L. Toner Award. He will officially be honored Dec. 6 during the 64th NFF Annual Awards program in Las Vegas. 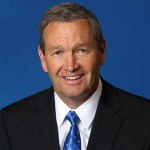 First presented in 1997, the John L. Toner Award recognizes athletics directors who have demonstrated superior administrative abilities and shown outstanding dedication to college athletics and particularly college football. The award is named in honor of its inaugural recipient, the late John L. Toner who was a former athletics director and football coach at Connecticut. Toner, an NCAA President from 1983-85, joined the NFF Board in 1988 and served as the vice chairman from 2000-2008.

“For two decades, Mitch Barnhart has skillfully guided Kentucky as one of the foremost leaders in collegiate athletics,” said NFF President & CEO Steve Hatchell. “He is committed to ensuring Wildcat student-athletes have success both on and off the field. We are pleased to honor him with the 2022 NFF John L. Toner Award in recognition of his distinguished career.”

Hired in 2002, Barnhart will begin his 21st year as Kentucky’s director of athletics this fall. He has steadily invested in the growth of all UK teams while maintaining a singular commitment to the holistic development of Wildcat student-athletes.

Matching resources to expectations has remained a hallmark of Barnhart’s tenure, with the proof coming in the form of student-athlete support, staff enhancements and $300 million in facility improvements since 2007. At the heart of everything are the core values he has instilled in the department he leads: character, integrity, knowledge, stewardship and competitiveness.

On the football field, Barnhart hired current Wildcats head coach Mark Stoops prior to the 2013 season, which has resulted in one of the best runs in program history. The 2018 SEC Coach of the Year, Stoops has led UK to six straight bowl games, including four straight victories following the team’s win against Iowa in the 2022 Vrbo Citrus Bowl. The Wildcats posted 10-win seasons in both 2018 and 2021 after not reaching double-digit victories since 1977.

In 2018, Josh Allen earned both the Bednarik Award and Nagurski Trophy as the top defensive player in the country. In 2007, standout tight end Jacob Tamme was selected as an NFF National Scholar-Athlete. Kentucky is also one of just 26 programs at all levels of play to have at least one player represented in all 16 years of the NFF Hampshire Honor Society (2007-22), which honors college football players who each maintained a cumulative 3.2 GPA or better throughout their college careers.

With assistance from the SEC, UK HealthCare, and state and local officials, Barnhart kept the Wildcats on the field and healthy in 2020-21 while facing the challenges caused by the COVID-19 pandemic. The Kentucky football team was able to play all of its scheduled games and topped the campaign with a win over No. 23 North Carolina State in the TaxSlayer Gator Bowl.

That season, Barnhart also served as Chair of the NCAA Men’s Basketball Committee and was instrumental in setting up the new procedure to bring all 68 teams to one location and support them with numerous health and safety protocols. As a result, all but one of the scheduled games was played successfully.

At Kentucky, Barnhart established longstanding goals of a department-wide 3.0 GPA among student-athletes and increased community service. The GPA benchmark was first met in the spring semester of 2010 and has now reached a streak of 20 consecutive semesters. In spring 2020, UK achieved a cumulative GPA of 3.534, the best in school history.

UK athletes have set records for graduation rates and maintained a perfect mark in the 17-year history of the NCAA Academic Progress Rate, making UK one of just two SEC schools to have always achieved APR compliance.

Community service has risen to more than 4,000 hours annually and includes outreach to the Lexington area, the Commonwealth of Kentucky and as far away as Ethiopia, the Dominican Republic and Panama. And, even during the pandemic, the Wildcats came up with new ways to serve the public.

Barnhart arrived at UK from Oregon State, where he served four successful years (1998-2002) as athletics director. Among the highlights of his tenure with the Beavers was the hiring of College Football Hall of Fame Coach Dennis Erickson, who led a massive turnaround at the university. In 1999, Erickson led the Oregon State football program to its first winning season in 29 years and their first bowl appearance in 35 years. Then in 2000, the Beavers earned a share of the Pac-10 title for the first time since 1964 and defeated Notre Dame in the Fiesta Bowl to finish with an 11-1 record and the No. 4 final ranking (the highest finish in school history).

Barnhart is a native of Kansas City, Kansas. He earned his bachelor’s degree from Ottawa University (KS) in 1981 and a master’s in sports administration from Ohio University.