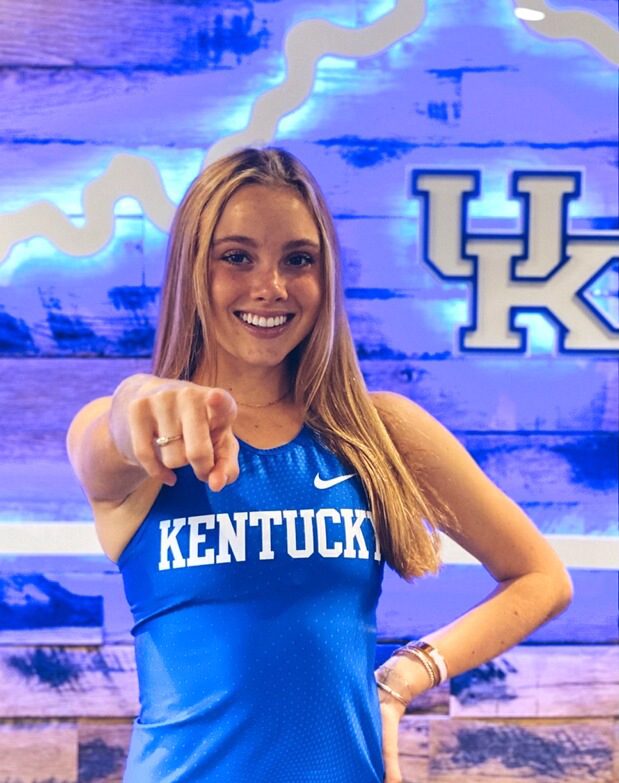 Anna Rupp didn't immediately announce her commitment to Kentucky but it wasn't because she had any second thoughts about UK. Photo submitted.

Imagine growing up in Lexington with the last name of Rupp. In a state that loves basketball, that’s a name almost any fan regardless of age would recognize because of the legendary coaching career Adolph Rupp had at Kentucky from 1930-1972 when he won 876 games and four national titles.

It’s no surprise Anna Rupp, the great-granddaughter of Adolph Rupp, admits she’s always been a Kentucky fan. Her grandfather, Herky Rupp, hit the ceremonial first shot at Memorial Coliseum when it opened and in 1976 her father, Chip, did the same thing at the first UK practice in Rupp Arena.

“It’s just in my blood. Kentucky athletics are so important to Lexington and the commonwealth. To have family connections and ties is really exciting. I truly bleed blue and always have,” Anna Rupp said.

She’ll be an official part of the UK athletics family  next year when she joins the Kentucky track and cross country programs. She is now at IMG Academy in Florida after spending three years at Lexington Christian Academy.

“I definitely heard a lot of stories about him (Adolph Rupp). It’s pretty cool the way his legacy lives on,” she said. “I read about him and his coaching career. I have never watched any film of him coaching, but I need to change that.”

She said a collegiate — or even high school — basketball career was never a possibility for her because her “hand-eye coordination is not all there” like it must be for basketball players.

“From playing in the backyard and driveway, I knew basketball was out of the picture,” she laughed and said. “I got into running. I was a very energetic kid. I had energy I couldn’t contain. I also rode horses competitively when I was younger. I had to be doing something.”

She actually joined the track team in sixth grade so she “could jump like my horse did” and run hurdles. Her coaches quickly told her she was too small for hurdles and she got into distance running.

“I never looked back. Every run is a gift,” she said. “I don’t know what I would do without running.”

She won consecutive Class A cross country state titles in 2018 and 2019 and also won the 3,200-meter Class A track title in 2019. COVID wiped out the 2020 track season her sophomore year. At the 2029 cross country state meet, she didn’t finish the event because of an injury and then was injured for all but one meet her junior track season.

So how did she end up at IMG Academy for her senior year?

“My reason for going to IMG was  to experience something completely new. I had gone to school in Lexington my entire life and I thought going to boarding school  would help me develop more independence. I wanted a new experience, especially in the Sunshine State,” she said. “They are known for their athletics but it was honestly just more for life itself than sports.”

It was not easy for her parents to say goodbye to their 17-year-old daughter. Her father, Chip, was an easier sell than her mother.

“I don’t think she was expecting me to go through with it, but she has been amazing. My parents both have been very supportive,” Rupp said. “It was an adjustment. I miss my friends every day but I have new friends and amazing coaches here. Coming to IMG was the best decision for me. I have matured in many ways and overall I am more prepared for college because I had to learn to do things on my own.”

She verbally committed to Kentucky in October when she came home for a visit and spent time with Hakon Devries, who coaches UK’s distance runners. She focused on what he told her about training, not on her family’s history with UK.

Rupp only told a few people about her commitment and didn’t make it public until early January.

Why such a secret?

“I didn’t have any pictures to post yet (on social media). No material to really put out there,” she joked. “I wanted to wait and make sure what I posted and put out there was meaningful and well thought out. It was not a secret about what I was going to do if someone asked, but I just didn’t tell unless they asked.

“It was hard to keep quiet because I was so excited to know I would represent the Wildcats running cross country and track. No one bleeds blue more than me. When I put the Kentucky jersey on,  it just felt normal.”

What hasn’t felt normal is the stress reaction she’s been battling for a while. She had one during the summer and thought it healed only to have another one come back on the same bone. She’s training again and hopes to be able to race before the track season ends.

“I was hoping for a full recovery by this point but it’s better to be safe than sorry with bone injuries,” she said. “I just want to get healthy and back running and I can’t wait to get to UK. It’s an honor to know I will wear Kentucky across my chest.”

Wheeler ‘back for more,’ eager for second season with…