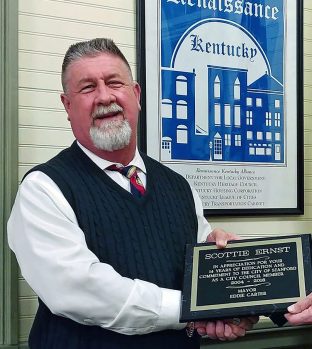 Photo by Abigail Roberts Scottie Ernst receives a plaque recognizing his 14 years of dedication and commitment to the City of Stanford as a council member. 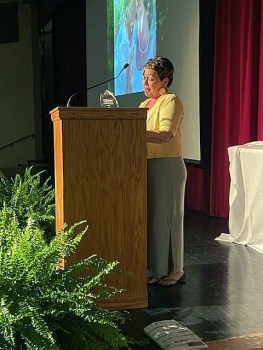 Photo submitted Debbie Ernst, wife of the late Mayor Scottie Ernst, receives the Citizen of the Year award on his behalf during the 2022 Chamber Banquet. 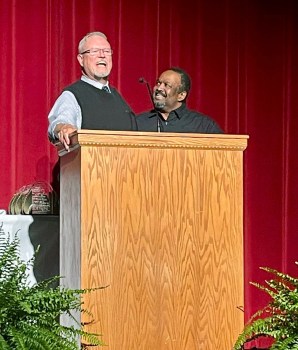 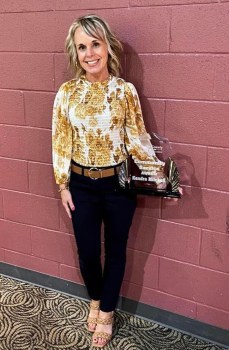 Photo submitted. Kendra Mitchell was the recipient of the 2022 Community Impact Award. 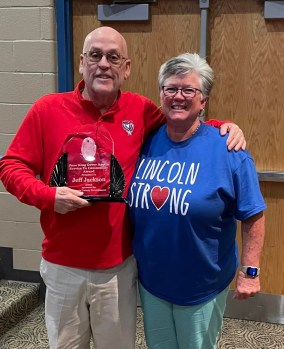 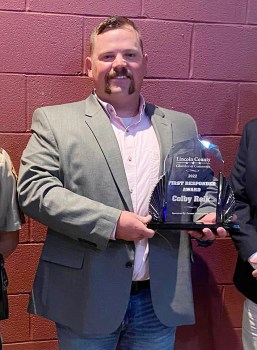 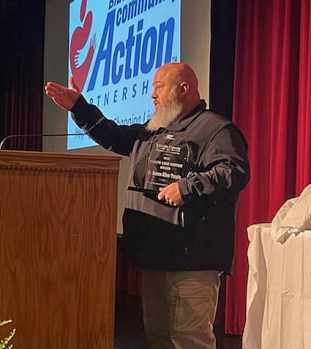 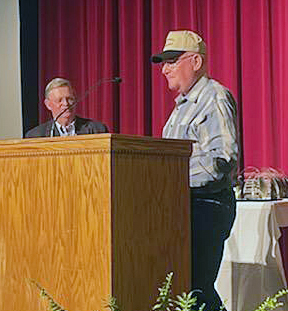 The late Mayor of Stanford, Scottie Ernst, was named the 2022 Citizen of the Year during the annual Chamber of Commerce Banquet held April 14.

Ernst was recognized for his dedication and love of Stanford. He served 14 years as a City of Stanford Councilman before being elected mayor. Ernst died in 2020 before his term ended. 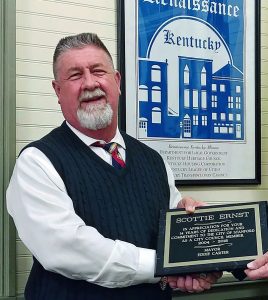 Photo by Abigail Roberts
Scottie Ernst receives a plaque recognizing his 14 years of dedication and commitment to the City of Stanford as a council member.

During his time on the council and serving as the city’s mayor, Ernst was often seen throughout the city “getting his hands dirty.”

“Scottie (was) not afraid to get ‘dirty’, putting on his work clothes and boots to get out and blow off the streets from one end of the town to the other…,” his nomination paperwork states. “But this (was) also a man that could put on a suit, go to Frankfort to talk to our representatives to see what is available for whatever our needs could be.”

Ernst’s wife, Debbie, received the award on his behalf. It was presented by John David and Mary Benton Friend. 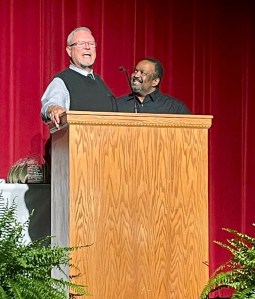 The “Big Apple” award was given to long-time educator Dean Jones for his commitment to the special education (exceptional child) program in Lincoln County.

“Dean is not only a teacher, but a mentor to so many past and present students,” his nomination paper states. “His dedication to those kids and determination to see some of the most challenging students excel is second to none.”

Jones has often made home visits to check on students, taken students to fun events and helped feed families over the holidays.

“His commitment has not only been in the classroom, but in the area of sports as well,” the nomination form states. “For nearly 15 of his 22 years of teaching, he coached middle school football and baseball and high school basketball, investing in students outside the classroom.

“Although he’s been offered positions in other counties, he chose to stay here and invest in the lives of Lincoln County youth.”

The Big Apple award was presented by Philip Sebastian. 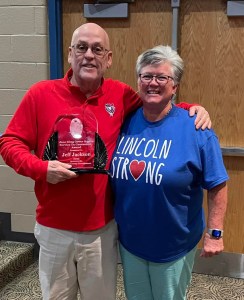 The June King Gover Bastin Service to Community award went to Coach Jeff Jackson, who led the Lincoln County High School Boys’ basketball team to the Boys Sweet 16 tournament this year. The team stood alongside Jackson as he received the award.

“The recipient of this year has orchestrated in their profession in bringing a tremendous amount of pride to our community,” said Martha Bastin, who presented Jackson with the award. “It’s not the first time they have done this but this year it seemed like it meant more to all of us.”

Bastin said the last few years have been tough on basketball fans who have not been able to attend games and have had to listen to them on the radio or watch them on Youtube due to the pandemic.

“It is my honor to present the June King Bastin Community Service Award to the person that has guided this great group of young men on a journey of a lifetime and a record-setting run at the state tournament, and brought so much pride to the community,” she said. “We know he didn’t do it by himself but he is the leader of the pack.” 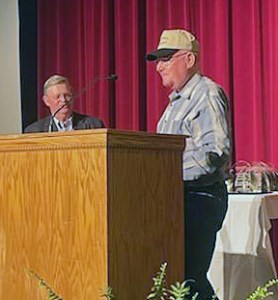 Farmer of the Year

Operator of one of the largest and most successful farming operations in Lincoln County, Kenny Stamper, was named the 2022 Farmer of the Year.

For 12 years, Stamper has been the chairman of the local tractor ride for Relay for Life fundraiser.

According to his nomination paperwork, Stamper’s efforts over the years have helped progress agriculture in Lincoln County.

Dan Grigson presented the award to Stamper during the annual Chamber Banquet.

Stamper was the county’s and area’s largest tobacco producer for many years. He also grew 500 to 2,000 acres of grain crops and managed beef herds from 250 to 900 cows.

Stamper has “semi-retired” but is still growing 400 acres of grain, has 200 cows, and does custom grain harvesting and tobacco hauling.

“He has been a very good farmer and outstanding in agricultural and community leadership,” Grigson said. 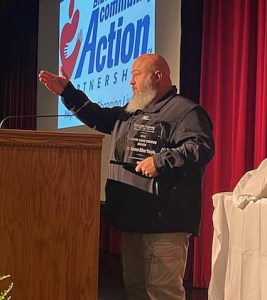 Dr. James Allen Turpin was given the Health Care Service Award for providing healthcare to Lincoln County for nearly 30 years.

Turpin is a Lincoln County High School graduate who began his healthcare career as a patient care tech and went on to become a licensed practical nurse, a registered nurse and then proceeded to medical school where he became a doctor.

“During his career, Dr. Turpin has worked to prevent, improve and restore the health of Lincoln and surrounding counties,” his nomination paperworks states. “Dr. Turpin has improved the community’s overall health by leading initiatives in the emergency room that have improved patient outcomes for conditions such as massive heart attack, stroke, trauma, sepsis and a host of other complications.” 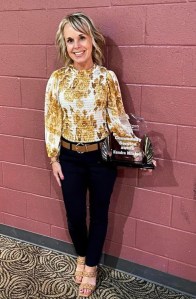 Photo submitted. Kendra Mitchell was the recipient of the 2022 Community Impact Award.

The recipient of the Community Impact Award is one who has a “huge heart for home,” according to Amanda Coffey, the award presenter.

Coffey presented the award to Kendra Mitchell for her impact on so many lives throughout her career in the Lincoln County School system.

Mitchell has worked countless hours to make the Winterfest program a success for many years, bringing Christmas cheer to families who were going through a difficult season in life. Mitchell used her contacts with Santa and Mrs. Claus to have them visit with the children and families, provided a warm meal, gifts for the children, much needed gas cards, blankets and a box of additional food for the Christmas break.

“(Mitchell) also assisted with a program that helped provide shoes to children in need,” Coffey said. “She has put in many hours with the Heart of Kentucky United Way Day of action program to teach young adults the benefits of giving back to their communities.

Mitchell has also served on other community committees including Safe Communities, Relay for Life and the Chamber of Commerce.

“This individual has a servant’s heart and has served Lincoln County well,” Coffey said. 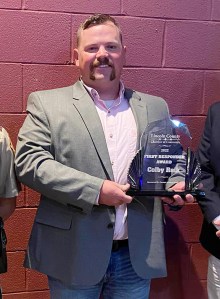 In the early hours of Aug. 1, 2019, a 30-inch high-pressure pipeline breached causing a huge explosion and fire which resulted in the death of one citizen and injured five others. More could have been killed if it were not for the heroism of this year’s winner of the First Responder of the Year, Colby Reik.

Reik was off-duty at home when he heard the call over the radio and he immediately responded.

As one of the first responders on scene, Reik drove into the inferno in search of survivors and ran to the aid of an elderly citizen, carrying him to the cruiser before going back for the man’s wife.

“Reik drove out of the area as homes burned around him and delivered the couple to paramedics who then drove them to the trauma center,” the nomination paperwork states. “His professional demeanor and heroic behavior demonstrate his dedication to duty and his commitment to his fellow officers and citizens of Lincoln County. Colby Reik is a genuine hero who is deserving of our distinct recognition and utmost gratitude.”

Donya Saylor presented the award to Reik during the Chamber event.