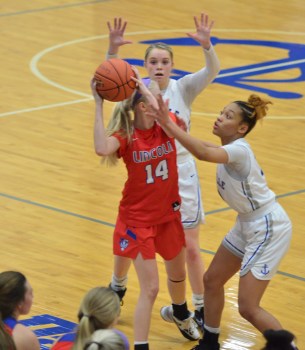 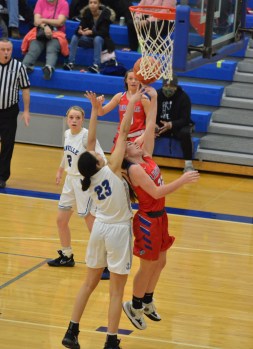 Ally Lynn, right, of Lincoln County gets off a shot against Danville’s Desiree Tandy during the fourth quarter Tuesday. - Photo by Mike Marsee 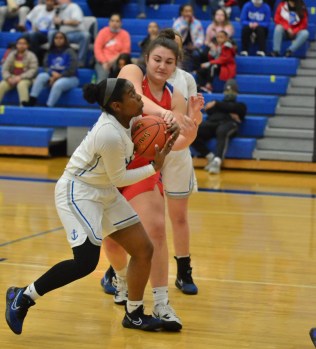 Tyliah Bradshaw, left, of Danville and Emily Estes of Lincoln County battle for a rebound during the first quarter Tuesday. - Photo by Mike Marsee 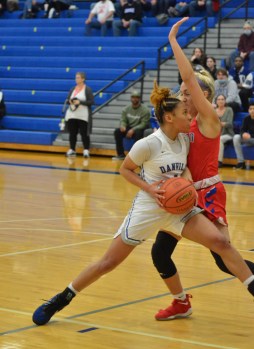 Love Mays, front, of Danville tries to drive to the basket as Lincoln County’s Elly Sims blocks her path during the first quarter Tuesday. - Photo by Mike Marsee

The pressure was just too much.

The Danville girls were at their defensive best Tuesday night as they rolled into the district finals and gathered steam going toward the regional tournament.

They ratcheted up their full-court defense, taking the pressure up to another level to put Lincoln County away early in a 78-47 victory in a 45th District Tournament semifinal at Danville.

The Lady Admirals forced 11 first-quarter turnovers and 26 in all and turned many of those turnovers into easy shots on the other end of the floor as they won for the 13th time in their last 14 games.

“I felt like our defense was in total control tonight,” Danville coach Judie Mason said. “If we play good defense like that, we’re going to cause some trouble for some teams.”

Danville (25-4) reached the 25-win mark for the second time in school history and advanced to the 12th Region Tournament for the fourth consecutive year.

The Lady Admirals will try to capture their third straight district title when they meet Danville Christian in the final at 7 p.m. Thursday.

A 55-51 loss to DCA on Jan. 14 in the 12th Region All “A” Classic final was a turning point for Danville, which won its next 12 games and emphasized the defense that Mason said was absent in that loss.

“That’s really what we’ve concentrated on since then, and it’s starting to show,” Mason said. “No matter how we shoot, we’ve got to be able to play defense.”

Danville’s shooting was plenty good enough against Lincoln. The Lady Admirals were right on their season average of 43 percent from the field and were even better from 3-point range, where they were 12 for 26 for 46 percent.

“Our defense got us good shots,” Mason said. “We missed a lot of good shots … but I just thought everybody played well.”

Lincoln (12-20) got away with 23 turnovers in its first-round win over Boyle County the night before but could not survive another high turnover count.

“(Danville) played like an experience-laden, upperclassman team who was hungry to make a deep run, and some of our inexperience and youth showed tonight,” Lincoln coach James Jackson said. “I thought our girls did some good things in spots, but when you play a team of that caliber who’s got that much experience, you’ve got to play for 32 (minutes) or you’re going to have tough times.”

Danville made four of its first five shots to lead 11-2 after three minutes and took a 22-4 lead when Jenna Akers opened the second quarter with the Lady Admirals’ fifth 3-pointer in nine attempts to that point.

Lincoln righted itself by outscoring Danville 12-8 over the next five minutes, getting five points from Chloe Ralston and four from Ally Lynn, but the Lady Admirals regained control with a 9-0 run that gave them a 39-16 lead.

Danville’s largest lead was at 57-23 late in the third quarter.

Taylen Ralston led Lincoln with 12 points and Lynn, the team’s only senior, had 10. MaKayla Greer had a team-high 10 rebounds.

Jackson said it has been a season of growing pains for Lincoln, which played for its third coach in as many seasons and relied heavily on players from all four high school grades.

“There were times when the Akers and Tandy and those girls had to go through the same things,” he said. “That’s what our kids are doing now, and hopefully by the time that they’re up there as juniors and seniors they’ll be able to do the same thing.