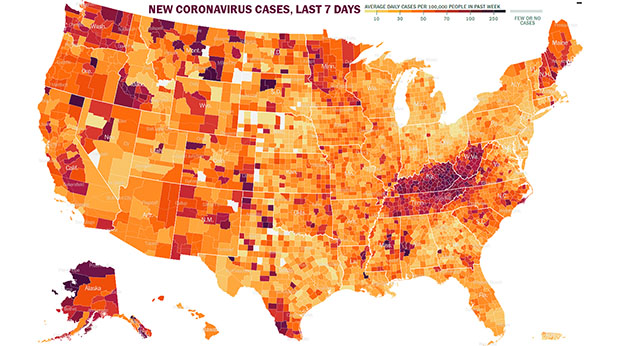 Even as Kentucky’s daily new-case rate, infection rate, positive-test rate and Covid-19 hospital numbers are steadily trending down, its seven-day rate of daily new cases continues to be the highest among states.

Beshear said this is the lowest weekly number of cases in two months and is now below the Delta variant peak. He said the hope is that Kentucky will drop to case levels seen between the Alpha and Delta variant surges, when the state was reporting around 1,000 cases a week.

In the same reporting week, the average test positive-test rate dropped to 13.1%. The rate Monday was 12.74%.

Asked if he had considered moving his new recommendations up from March 14, especially with the Senate proposing that the pandemic state of emergency end March 7, Beshear said ending the state of emergency would have no impact on the need for him to provide guidance, and while trends could support earlier changes, at this time his best prediction for the new guidance remains March 14.

Beshear continued to caution that while things are headed in the right direction, case numbers and the positivity rate are still too high.

He urged Kentuckians to be patient just a bit longer, especially schools who are increasingly making masks optional.

“I would ask that everybody who can, be patient for the next couple of weeks, because right now with the level that we’re at and the low vaccination rates, I don’t believe it’s fully safe to go mask optional,” he said.

Kentucky continues to have the highest infection rate among states, according to The New York Times. Using Centers for Disease Control and Prevention data, the Times says Kentucky has 10 of the top 20 counties: Perry, Estill, Floyd, Butler, Morgan, Clay, Breathitt, Carter, Whitley and Boyle. (CDC and state figures differ due to methodologies.)

In the last 14 days, Kentucky’s CDC new-case rate dropped 31%, but every other state but Maine and Idaho had larger decreases.

Beshear said current trends give hope that we are moving from a pandemic to an endemic, meaning that the virus will have stopped being widespread, but remain present, with outbreaks limited to particular regions. He cautioned that it is hard to predict since this virus has “thrown us a lot of curveballs before.”

Kentucky’s weekly hospital numbers also continue to decline. On Monday, the hospitals reported 1,333 Covid-19 patients, with 270 of them in intensive care and 141 on mechanical ventilation.