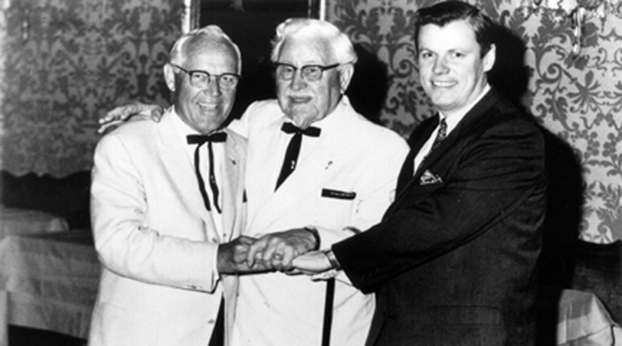 From left are Jack C. Massey, chairman of the board of Kentucky Fried Chicken, along with Colonel Harlan Sanders and KFC president John Y. Brown in a 1967 photo.

You may not have heard of the late Nashville businessman Jack Massey. But if it weren’t for Massey, you probably never would have heard of Kentucky Fried Chicken.

Born in Georgia in 1904, Massey moved to Nashville on the eve of the Great Depression to be a pharmacist. He eventually started his own drug store, then a chain of drug stores, and then a surgical supply company. He sold Massey Surgical in 1961, intending to retire.

Retirement “didn’t take,” as they say. Bored with playing golf and rummy, Massey began looking around for a company to buy. The search led him to a young Kentucky lawyer named John Brown Jr. and thus to a persnickety, white-suited entrepreneur named Harland Sanders (who had been made an honorary colonel by the Kentucky legislature).

Many years later, Brown remembered the first time he introduced Sanders to Massey. “We go to lunch, and right off the bat the Colonel says, ‘I just want you to know that no slick Southern so-and-so is going to come in here and buy my company,” Brown later said. “It just came out of nowhere. That was something Jack and I hadn’t even talked about.”

However, that’s exactly what eventually happened.

In 1964, at a meeting at Utah’s Covered Wagon Motel, Brown and Massey convinced Sanders to sell them his restaurant business, called Kentucky Fried Chicken, for $2 million in cash. Massey and Brown tried to get Sanders to take part of his payment in stock, but Sanders turned down that offer (a decision he would later regret). “It was hard for him to accept the idea that the company could possibly be better without him running it,” Brown told me a few years ago. “So he said, ‘I don’t want any of your stock. It’s not going to be worth toilet paper.’”

Under the contract, Sanders also agreed to sell Massey and Brown his likeness, which is why you see comical (and in my opinion, disrespectful) imitations of Sanders in television commercials today.

The next four years changed the history of restaurants and franchising. When Massey and Brown bought KFC, the business was nothing like the chain we know today. At that time, Sanders’ pressure-cooked chicken was mainly sold as a menu item at mom-and-pop diners; stand-alone locations were the exception rather than the rule. The company did little advertising.

Massey and Brown turned Kentucky Fried Chicken into a fast-growing chain of stand-alone fast-food restaurants and launched a national advertising campaign to tell the world about it.

Soon, new franchises were moving into markets that before this time had never heard the phrase “secret recipe of 11 herbs and spices.” The restaurant chain went public, its stock doubled, doubled again, and became one of the most talked-about companies on the New York Stock Exchange.

Somewhere along the line, KFC originated the drive-thru window—at least as far as fast-food chains are concerned.

By 1968, Kentucky Fried Chicken had made millionaires out of many of its franchisees (such as Dave Thomas, who later started the Wendy’s restaurant chain). Massey and Brown sold the business to Heublein for $240 million, and within a year or so KFC’s corporate headquarters was moved from Tennessee back to Kentucky.

But Massey still didn’t retire. Instead, he co-founded a chain of hospitals, along with three other Nashville men (Dr. Thomas Frist Sr., Dr. Thomas Frist Jr., and Henry Hooker). Dismissed at first because of Massey’s association with fast food, Hospital Corporation of America eventually became the leader in a new sector of the economy called for-profit health care.

Today HCA remains one of the most important companies in Tennessee. It owns 185 hospitals and has large market shares in metropolitan areas such as Dallas, Kansas City, Houston, Tampa, and Nashville.

Massey died in 1990. Today the Nashville landscape is filled with things he created, co-founded, or financed. One of the most subtle tributes to Jack Massey is the successful restaurant chain known as J. Alexander’s. Originally started by a group of Nashville investors with historic ties to Massey, the “J” in J. Alexander’s stands for Jack, as in Jack Massey.