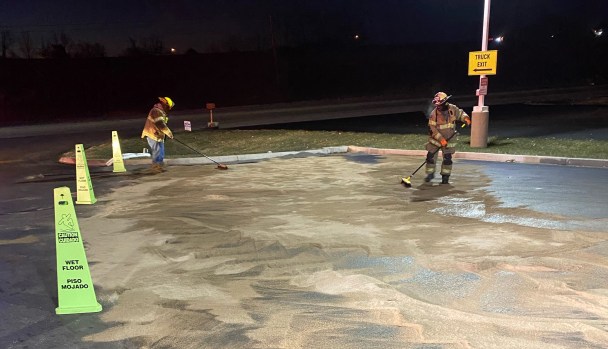 Emergency personnel were on the scene for approximately three hours to clean up about 75 gallons of diesel fuel that spilled onto the ground outside Five Star in Stanford. - Photo courtesy of Stanford Fire Department 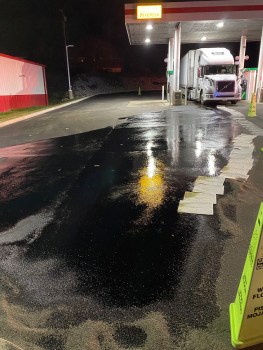 Approximately 75 gallons of diesel fuel was spilled on the ground outside of Five Star in Stanford Tuesday morning when the fuel nozzle fell out of the truck’s fuel tank. - Photo courtesy of Stanford Fire Department 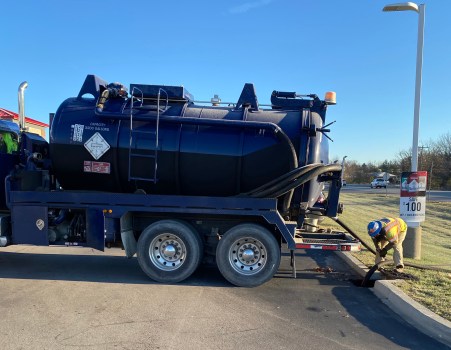 Approximately 75 gallons of diesel fuel was spilled on the ground outside the Five Star convenience store in Stanford sometime before 6 a.m. Tuesday morning.

According to Don Gilliam, Lincoln County’s emergency management director, the spill occurred when the driver of a tractor-trailer was refueling his vehicle. The nozzle of the pump was left in the tank, but came out and was not immediately noticed by the driver.

Gilliam said the incident was initially reported as being a tanker that was spilling fuel, but it was later determined that was not the case.

“We got the call that it was a tanker, but it turned out to not be a tanker. It was just a freight-hauling cargo semi, and he was refueling one of his saddle tanks and the nozzle came out,” Gilliam said.

The vehicle responsible for the spill was operated by Rucks Trucks based in Eubank, Kentucky, according to Stanford Fire Chief Scott Maples. He said his department and its hazmat team responded and were on the scene for about three hours. In addition to local first responders, Nicholasville-based Pecco environmental consultants was called in to assist with the efforts.

“Everything was contained in the stormwater drain. We called in Pecco with a vacuum truck to clean those drains and suck all of the diesel fuel out of the drains and to help with the cleanup,” Maples said.

Gilliam originally estimated that about 30 to 40 gallons of fuel had been spilled, but Maples said it was later to determined to be at least 75 gallons.

Gilliam stressed that there was no environmental damage done as a result of the spill.

There were no injuries reported from the spill and no evacuations were necessary in the area. Gilliam did add that the southern entrance of Five Star was closed for a short time.