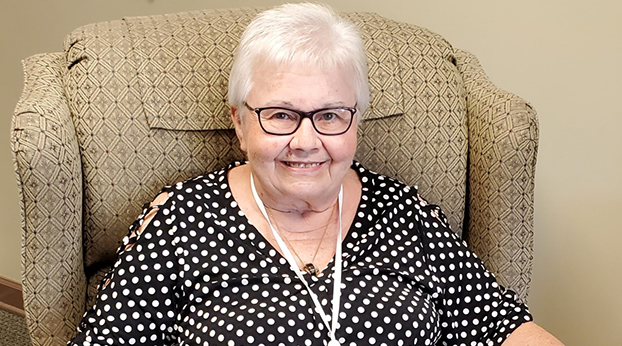 Originally from New Hampshire, Nancy Lowe has a strong medical background with former work in Orthopedics and Obstetrics/Gynecology as an Administrative Assistant. Lowe has called Kentucky home since 2016 when she retired from her career and has been with Heritage Hospice as a Lincoln County volunteer since. At the start of her retirement, Lowe decided she either wanted to volunteer for Hospice or in a neonatal intensive care unit as a cuddler. Shortly after her move here, she was driving to the veterinarian, and on the way, passed Hospice and immediately knew Hospice was where she was meant to spend her time.

Before coming to Kentucky, Lowe had experience with Hospice. During the last stages of her father’s life, Hospice provided the support and tools needed to allow his wish to pass at home to become a possibility. “I couldn’t have done it without Hospice. They not only supported him- they supported me,” said Lowe. While volunteering with Hospice, Lowe does a little bit of everything. During non-COVID times, Lowe did patient care, but she also serves at the front desk on occasion, she makes patient survey calls that are assessing the needs of patients/families that have been with Hospice for thirty days or less, and helps with the fundraising event, Tea and Treasure.

When asked why she chose Hospice, Lowe said she wanted to give back in a way that would allow other families to get the same care she and her family had received. Lowe acknowledges that Hospice is a difficult location for some to do service, but she finds motivation and joy in seeing the smiles of those she can serve. It means a lot to her to know that she is trusted and valued by the families she encounters, especially since it’s always at a very difficult time for the patient and their families.

While actively working with patients and their families has been most of Lowe’s time at Hospice, she has also helped with the annual fundraising event, Tea and Treasure. This year and last were out-of-the-ordinary due to COVID requiring the event to be held virtually, but that doesn’t stop the impact it can have. From making a quilt, donating items, serving in the office on pickup day to greet people and help locate the item they have purchased, and helping run the silent auction. While the silent auction hasn’t been in-person the last couple of years, there is still plenty to be completed. From cataloging the items to boxing them to organization. As much as she loves the event, she loves how worthwhile the event is even more as it creates funding for patients to get the items they need.

Lowe describes Hospice as being full of the most caring individuals, with each of them having a lot of heart, and that statement carries through in her own words and actions. Further, Heritage Hospice, Inc. is ranked in the top 100 hospices nationwide, and that accolade doesn’t come unwarranted.

Home to quality, compassionate care since the late 1970s, Heritage Hospice, Inc. enhances life by empowering patients and families to better cope with physical, emotional, social, and spiritual concerns in the final stages of life. Heritage Hospice, Inc. provides services to patients in their homes and nursing facilities as a non-profit organization.

If you’re interested in contributing to Heritage Hospice, Inc., the 8th Annual Tea and Treasure Online Auction Fundraiser will be held November 5-14, 2021, at https//www.vipauctionky.com. This event is hosted by the volunteer department and will consist of silent auction items and some tabletop settings. If you’d like to get involved in a volunteer capacity, there is training on an as-needed basis. To learn more or to set up an appointment, please call Wendy or Renee at (859) 236-2425.