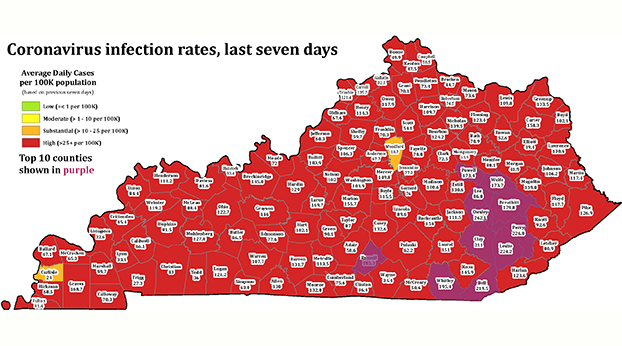 Requiring masks above a certain level of coronavirus infection shouldn’t be difficult “because it’s just basic science,” Gov. Andy Beshear told a national television audience Sunday morning, alluding to the biggest point of debate in the special legislative session that he has called to begin Tuesday.

Beshear wants legislators to give him the authority to order masking at some level of infection, and has said he expects that to be the session’s most contentious issue. The session wasn’t mentioned on NBC’s “Meet the Press,” but the pre-session debate was the background for moderator Chuck Todd’s question: “Why has it been hard to just create a statistical line” at which masks would be required?

The governor replied, “It has been difficult, and it shouldn’t be, because it’s just basic science. Our healthcare providers have been wearing masks for decades. Why? To prevent infection, uh, in different areas.”

Beshear said Saturday, as he called the session, that if a county can’t keep infection at a moderate level, as shown in yellow on the state’s color-coded map, the state should be able to step in with a mask mandate. Right now, all but two of Kentucky’s 120 counties are in red, indicating a high level of transmission; the other two are in orange, indicating “substantial” transmission.

Beshear has said that he would have renewed the mask mandate that he lifted in June if not for the state Supreme Court ruling that upheld laws the legislature passed last winter limiting his emergency powers.

Beshear continued in the interview, “I think this is a test of our humanity. I believe that’s what this pandemic is. Remember, a pandemic isn’t an issue; it’s a virus that is trying to kill as many of us as possible. And so I think it comes down to, are you willing to be selfless, and wearing that mask, and loving your neighbor and protecting them, or is more a question of selfISH: ‘I have the right to do whatever I want even if it causes harm to others’?

“You know, we can’t walk into a crowded movie theater and yell fire. Your freedom of speech doesn’t extend that far, so let’s remember that liberty is the right to live our lives, not to cause someone else’s death. That should be pretty easy for people of faith, for people of values, and I hope that we can start living that faith and those values to protect one another once again.”

Beshear has said making is the best short-term tool to thwart the virus, while vaccination is the best long-term tool. Todd asked him if certain groups are not listening to him.

He replied, “We are well past, I think, all across America, the populations that are gonna listen to a government official and take the vaccine because of it. We’re probably past even the point of where a local official or pastor or others” can do that.

“Where I think we’re at is where people are gonna have to break that Thanksgiving-dinner rule. They are going to have to call or go see that person they love and care about that is unvaccinated; they’re gonna have to put the relationship on the line, because they’ve never been at greater risk. I think it’s that type of caring, and the person who is willing to do that, to make that sacrifice that will finally get through to those who are not vaccinated. That’s what we’re seeing here in Kentucky, and we need all Americans to do it. Yes, you might lose a friend because of that conversation, but that friend might lose their life if they don’t get vaccinated.”

The Democratic governor was interviewed jointly on “Meet the Press” with Gov. Larry Hogan of Maryland, who is a sort of mirror image of Beshear: A Republican governor in a well-vaccinated state that has a Democratic legislature with a veto-proof majority.

“Our metrics are almost completely opposite of what Governor Beshear is dealing with in Kentucky,” Hogan noted, but said 19 percent of his vaccine-eligible population is still unvaccinated because “There’s been tremendous disinformation campaigns, and people are believing things that are simply not true.”

Beshear said, “When it comes to misinformation, I really don’t think this is a red-versus-blue issue. It is a fact-or-fiction, or sometimes a sane-versus-insane issue. . . . Taking a horse dewormer is crazy under any circumstance.”

He was asked what he can do to slow Kentucky’s surge of cases, now third highest in the nation. He replied by noting record case numbers and Covid-19 hospitalizations, “Our situation is dire . . . We have a record number of families praying for their loved one who is on a ventilator.”

“It is a challenge,” Beshear said. “We are hit very, very hard, but we are going to continue to fight. When you’re at war, you don’t get to cry about what you can or can’t do. You gotta do your best every day because this is a battle of life versus death.”

He noted that he has sent the National Guard to “our hardest-hit hospitals” to take over non-clinical work and testing for the virus to free up clinical staff, dispatched nursing students “all over Kentucky” and gotten “strike teams” of health workers from the Federal Emergency Management Agency.

The first of the three teams arrived in Morehead Saturday, a news release from Beshear’s office said. The team comprises a medical officer, physician assistant, nurse practitioner, supply officer, respiratory therapist, four registered nurses and three paramedics, and has been mobilized to assist St. Claire Regional Medical Center through Sept. 17. “The team can help with opening more available beds that had not been used due to lack of staffing,” and can help in the emergency department, the release said. “The team is fortifying existing staffing and areas of specialty, including those offered by St. Claire’s respiratory team, and clinicians tasked with ventilator management.”