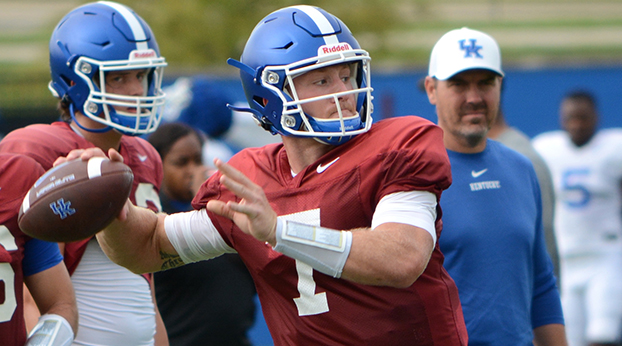 Will Levis has to throw for 2,500 or more yards this season to show UK’s new offense really works. (UK Athletics Photo)

Quarterback Will Levis, a Penn State transfer, will be looking for big numbers this season as he pursues future NFL career opportunities.

“I haven’t been around many quarterbacks who throws the ball the way he does. It’s something special,” UK receiver Wan’Dale Robinson said.

Pat Forde of Sports Illustrated has the UK quarterback included on his list of the 25 most intriguing players for the 2021 season.

With new offensive coordinator Liam Coen running the offense and UK seeming to have more big-play options at receiver, Levis’ passing total — if he is healthy — has to be at least 2,500 yards or I think a lot of UK fans will be disappointed.

“I am excited to see what we are going to do with this offense. Coach Coen brought me in because my strengths suit this offense as a whole and I think we can put up big numbers,” Levis said.

Levis could have three years of eligibility at Kentucky but he has indicated two years is all he plans to play before hopefully being ready for the NFL.

He is the 15th different starting quarterback Kentucky has had since 2008 after Andre Woodson started 37 straight games from 2005-2007. However, Levis has convinced UK coaches and players he can be special.

“Until they can complete a forward pass, I have a hard time looking at Kentucky as a team that can beat us,” Matthews, a 14-year NFL veteran, said on a Florida football podcast.