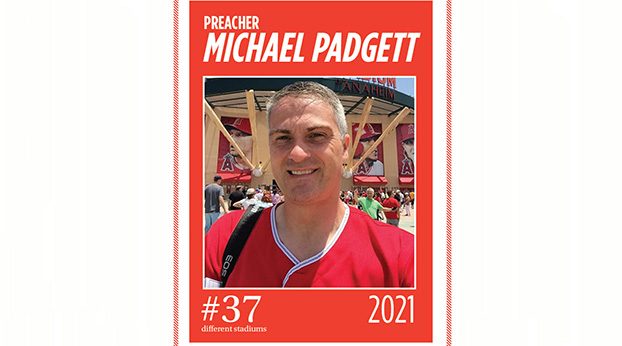 Middlesboro preacher Michael Padgett has seen every Major League Baseball team play in person, and has visited all current big league stadiums, as well as some that are no longer in existence.

How many baseball fans have traveled all over the United States and Canada, and visited all of the major league baseball stadiums?

I’m sure there are some fans, but not many. And we have at least one from Kentucky.

“I have attended regular season major league baseball games at 37 different stadiums,” said Padgett. “I’ve also been to spring training games at about a dozen different venues as well. I completed my quest to see games at all 30 stadiums in Toronto on Aug. 23, 2016. Then Sun Trust Park (now Truist Park in Atlanta) opened the following season, and I completed it again in April. Globe Life Field (home of the Texas Rangers) opened in 2020, but COVID-19 canceled my plans to see a game there last year. I have tickets for the Angels-Rangers series the last week of the 2021 season.”

Padgett, who is a longtime pastor at Middlesboro Church of God Mountain Assembly, was asked about his favorite ballpark.

“I’m always biased when I answer this question because I am an avid Angels fan,” smiled Padgett. “Disneyland Park (in Anaheim, Calif.) is supposed to be the happiest place on earth.

“But, to me, it’s a few miles away at Angel Stadium. My favorite stadium without my Angels-bias is Petco Park in San Diego. It is a beautiful stadium with extra wide concourses, and the Western Metal Building in left field gives the venue historic character. The ‘Park in the Park’ beyond center field is also really nice.”

Padgett grew up in east central Indiana where he played tee ball and Little League. He said he wasn’t a very good player but “loved baseball as long as I can remember.”

And the area is loaded with the fanatical fans of the Cincinnati Reds and the Chicago Cubs.

By the way, some of the younger men at his church recently paid for a video shoutout from Jackson on the cameo app for the Pastor’s Appreciation Day, celebrating the 35th anniversary of Padgett’s first sermon.

“It was so cool,” said an appreciative Padgett.

His favorite team is over 2,000 miles away. Why cheer for the Angels?

“When Reggie Jackson signed as a free agent with the (then) California Angels before the 1982 season, my allegiance went with him, and I’ve been a fan of the Angels ever since,” Padgett explained. “It is much easier to be a fan of a west coast team now than it was before the internet. I convinced my mom to subscribe to the evening newspaper when I was a teenager just because the box scores of the late games were included in the later edition. I’ve seen all 30 teams play at home and on the road, but I’ve still seen the Angels play the most. I’ve been to 113 Angels games (in 21 different stadiums).”

What about the baseball cards? Did he grow up collecting cards as a youngster?

“My older brothers had baseball cards first. My younger brother and I became fascinated with them and can still identify many players from the 1970s from their Topps cards without seeing their names,” he recalled. “I started collecting cards in the early 1980s. Most of what I have now are Angels cards. I have a complete Angels team set of Topps baseball cards from 1961 through 2020.”

Padgett has seen a lot of exciting baseball games and pointed out it’s very difficult to choose his most memorable moment or game that he has seen in person.

“It’s hard to pick one,” he commented. “I was at the game when Albert Pujols hit his 500th home run, and at the game when he drove in his 2,000th RBI. Since only he, Babe Ruth, and Hank Aaron have done that, that’s a big deal.

“I was also on my way home from a game in Chicago, listening to the Reds game on the radio. When we hit Cincinnati and Jake Arietta had a no-hitter through six innings, we stopped and got a ticket to watch the last three innings. It’s my only no-hitter, so far.”

His first game was in May of 1986 at the old Riverfront Stadium in Cincinnati when he played the tuba as a member of his high school band in a pre-game performance.

His family often travels with him to baseball games.

“My wife (Dedra) and kids are not as passionate about baseball as I am, but they generally enjoy attending games with me,” he added. “Dedra and the girls (Carissa and Lauren) have seen all 30 teams play, and (son) Andrew has seen them all but the Yankees as our game at Yankee Stadium got rained out.”

His children, now fully grown, participated in sports and were standouts at Middlesboro High School. Padgett also served as the school’s official basketball game or team’s scorekeeper when his kids played various sports.

“Dedra always told people I kept the book because it required me to behave during the game,” he said, laughing. “I have always enjoyed being so close to the action. I kept the book for the Lady Jackets for seven seasons and just finished my sixth season for the Middlesboro boys’ team.”

In addition to baseball and ministering, Padgett, who has a PhD in leadership from the University of The Cumberlands, also enjoys writing and history. He also has two degrees (undergraduate and graduate) in history from Eastern Kentucky University. He recently has written a new 525-page paperback, titled “A Bow Tied: Ecclesiastical Polity in the Church of God Mountain Assembly.” And Padgett will be teaching an undergraduate course in U.S. history as an adjunct instructor at EKU this fall.

“I have always had a passion for history, and most of our family vacations have centered around travel for baseball and historic places,” he said. “I’ve been to the grave of every U.S. president. I was at the grave of George Herbert Walker Bush a few years ago before he died, but haven’t had a chance to go back yet. I’ve also visited every presidential birthplace except for Biden’s and Obama’s.

“When I have taught history, I have tried to pass on that same passion. I feel like visiting places like Independence Hall and the Old North Church ‘make real’ the narrative that you read. I’ve shared pictures and anecdotes about my travels when I lecture on the historic events associated with the places.”

If you want to know something about baseball or history, just ask Dr. Padgett and he’ll be glad to help.

Jamie H. Vaught, a longtime sports columnist in Kentucky, is the author of five books about UK basketball, including recently-published “Chasing the Cats: A Kentucky Basketball Journey.” He is the editor and founder of KySportsStyle.com Magazine, and a professor at Southeast Kentucky Community and Technical College in Middlesboro. You can follow him on Twitter @KySportsStyle or reach him via email at KySportsStyle@gmail.com.