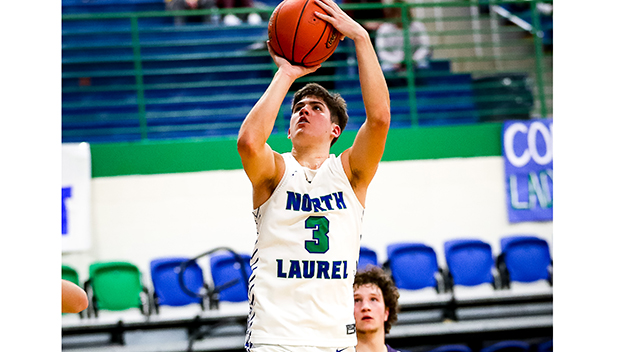 Reed Sheppard says each scholarship offer is special but the one last week from Kentucky meant something extra special. (Les Nicholson Photo)

North Laurel’s Reed Sheppard led the state in scoring last year as a sophomore at 30 points per game and has created a statewide buzz among UK fans with his play. The junior knew fans across the state were hoping he would get a scholarship offer from Kentucky and he finally did last week after John Calipari and his entire staff watched him play in Birmingham.

“I try not to pay too much attention to it. But it is all over social media,” Reed Sheppard said. “Even if I try not to see it, I see some. I see some say Kentucky needs to offer and when is Kentucky going to offer. I try not to think about what they are all saying and just enjoy what is going on.”

“But it is pretty cool knowing everybody is rooting for me to get an offer. It is definitely something to be thankful for.”

Reed Sheppard now has 11 offers, including one he got from Indiana after the UK offer came. He had noted before that Louisville, Gonzaga, Virginia, and Clemson were also recruiting him heavily.

“Every offer is special and unique. I am thankful for these opportunities and all the offers I have,” he said. “But this one (Kentucky) is extremely special to me. This one means a lot. Growing up in Kentucky, everybody’s childhood dream is to play at the University of Kentucky. My mom and dad played there. It’s just really cool to have this opportunity and I am thankful for it.”